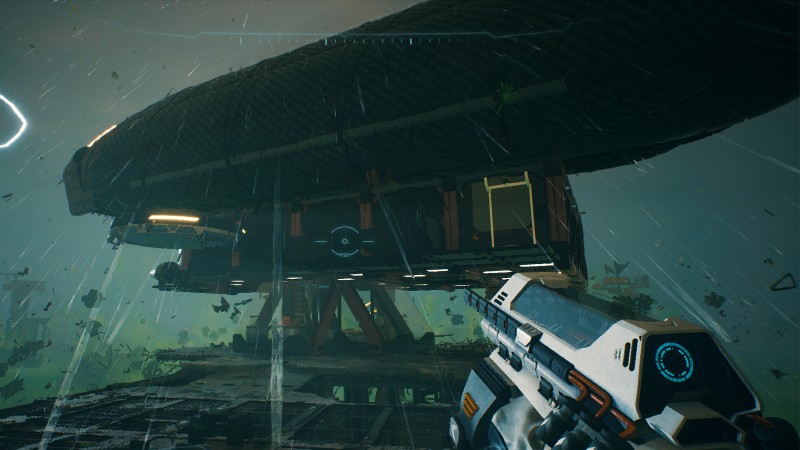 Far From Home has released a new trailer for its upcoming first-person survival sci-fi game, Forever Skies, and it showcases the impressive verticality players will be scaling on an abandoned, decrepit Earth.

Forever Skies was revealed back in January. Far From Home showed then that players will control a scientist who returns to a devastated Earth to scavenge for remains while discovering what’s changed on their former home planet. Following an ecological disaster, Earth has been left heavily coated in a thick layer of toxic dust, and you’ll need to discover why this happened and how to survive it while you’re there. At the heart of the game’s survival exploration is your airbase, which is like a sci-fi airship that serves as your headquarters.

“Both on foot and in their fully adaptable airship, players must explore ruins above and below the dust in this strange new world, collecting samples and hunting for specific virus strains to find a cure for what remains of humanity, currently displaced in Earth’s orbit,” a press release reads. “New scientific technology, particularly the use of nanobot repair systems and advances in biology and biotechnology, will aid players on their journey. But the surface has become a dangerous and inhospitable environment in humanity’s absence. Evolved fauna and flora and curious new microorganisms have emerged, making humans now aliens to their home planet.”

Forever Skies will be a single-player game when it launches into Early Access this year on PC, but Far From Home has plans to add co-op and console support to it. As you can see in the trailer above, Forever Skies features plenty of destroyed locales to visit, and despite the ecological destruction, it looks great visually.

The footage in the trailer is in-game pre-alpha footage, according to Far From Home, but we’ll all be able to go hands-on with it sometime this year when Forever Skies hits Steam Early Access. In the meantime, be sure to watch the Forever Skies reveal trailer from January.

Are you excited for Forever Skies? Let us know in the comments below!