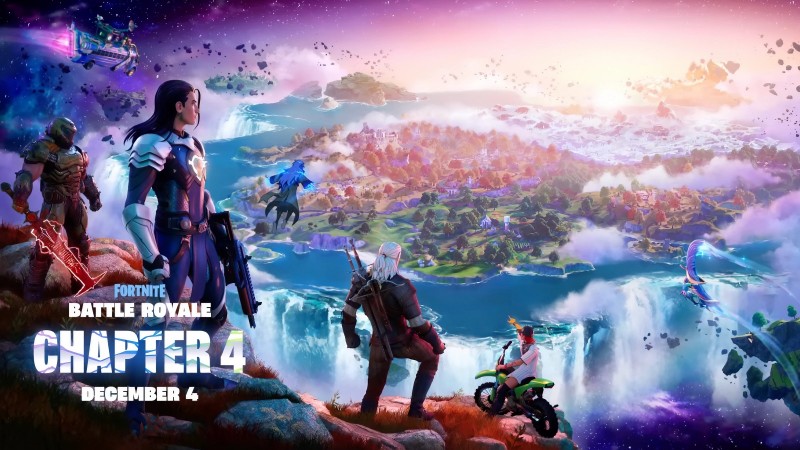 Fortnite Chapter 3 has officially come to a close.

Chapter 3 began last December and now, we officially know Chapter 4 begins tomorrow, December 4. Like with previous chapter launches, Chapter 4 brings with it an all-new map to play on that will be filled with new locations and returning favorites. There’s a glimpse of this new map at the end of the Chapter 4 “A New Beginning” trailer, which you can watch below:

Here’s another look at the Chapter 4 map:

Elsewhere in the trailer, you can catch a glimpse of new skins that will likely be in the Season 1 battle pass such as Geralt of Rivia from The Witcher series, the Incredible Hulk, the Doom Slayer from Doom, and even YouTuber Mr. Beast.

Before all of that, though, players got the chance to experience the Chapter 3 “Fracture” finale event today at 4 p.m. ET (if you missed it, unfortunately you cannot go back to play it as of now). In it, we saw the battle island essentially implode with bits and pieces of it scattered across the stars.

Players were tasked with collecting zero point fragments scattered about a small section of this map floating in space. The more players collected, the more pieces were added to the playable area. Players could complete quests such as throwing snowballs at enemies or bouncing players off into space as beach balls. You could also complete races, match island props, and more. Everything you did rewarded you with a zero point fragment. After about 30 to 40 minutes of this, the Chapter 4 trailer began. In it, we saw what appeared to be the creation of the Chapter 4 map, with the zero point dragging in pieces from space to create it.

Fortnite Chapter 4 officially begins tomorrow, December 4, but a start time has not yet been revealed.

Did you participate in the Chapter 3 finale? What did you think of it? Let us know in the comments below!