God of War Ragnarök Review – Next To Godliness 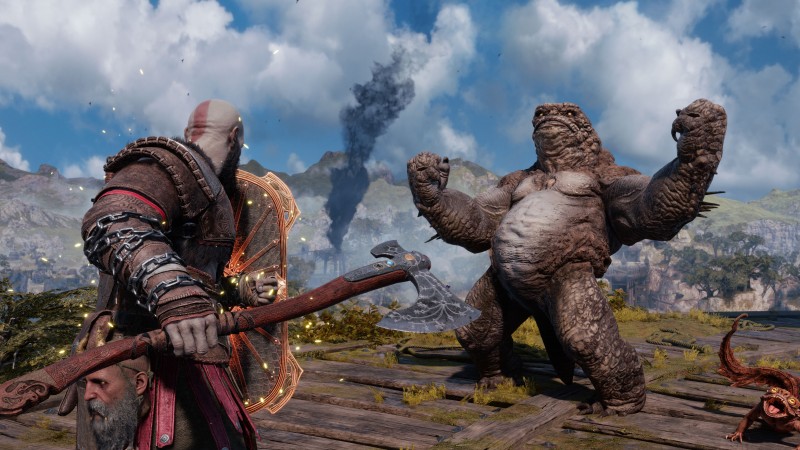 To call the 2018 God of War a sequel almost does it a disservice. Yes, it was a continuation of Kratos’ original multi-game journey, but it placed him and a new family in a foreign world to reflect on his past and try to secure his future. Kratos’ journey to connect to his son while battling a new legion of distrustful gods was a revelation in both video game storytelling and action, setting a high bar for the inevitable sequel. Ragnarök may lack the unique impact of the prior game, but everything that worked so well the first time comes forward, along with a story that earns the proper definition of the term epic.

Ragnarök basically picks up exactly where the previous left off in terms of narrative. Atreus is a little older and has shed the ‘boy’ nickname entirely. In a tradition established early in the God of War series, the opening hours are stellar. The action kicks off immediately, setting up new foes and old friends, but among all the explosive set pieces are quiet moments of engrossing performance showcase. Newcomer Odin and returning scorned mother Freya’s characterizations are particularly fantastic, but even the weakest performance in Ragnarök makes the typical video game performance pale in comparison.

The excellent moment-to-moment writing outdoes the already fantastic dialogue of the 2018 game. Ragnarök is, surprisingly, the funniest God of War to date. Kratos is the most stoic, straight man in all the nine realms and he surrounds himself with vulgar dwarves, a wisecracking decapitated head, a sometimes over-confident teenager, and more. I laughed often as Kratos said things like, “I do not need a snack,” when Sindri offered him food, or when he shared a dismissive grunt when characters made fun of him for only ever offering dismissive grunts.

As key as the story has become to this new era of God of War, the combat remains an equally important element. The most negative thing to be said about fighting the various enemies of the nine realms is it isn’t radically different or changed from the previous game. You start with more weapons this time around, but the core combos are mostly the same. The library of special attacks you can pull off is larger, but I admit I found my favorites early on and was not particularly compelled to experiment.

The types of enemies you fight, on the other hand, has greatly expanded. Mini bosses are numerous, and when they repeat, a new wrinkle is typically added, or it is a fully optional pursuit. The optional content, which accounts for far more than additional boss fights, makes up a large percentage of an already massive game. Alongside side quests to pursue next to the main path, there are also large open areas to be explored at your leisure with sled dogs that offer worthwhile moments of character development and tangible rewards. In some cases, I completed side stories with big, important moments and only learned they had been optional afterward.

Ragnarök, despite its fantastic setting, does feature a grounded tone thanks to its splendid performances and fully realized characters, but it is not afraid to be a fun video game. Puzzles expertly mix up the pace between combat encounters, and I was constantly impressed with how there always seemed to be story context for engaging in the video game parts. When ignoring the main task to find treasure chests, for example, Atreus would always take time to explain to the new characters that his dad likes loot. Despite the urgency of the story, Mimir would often make sure to state that we can take our time and explore if we want to. These little moments and bits of dialogue showcase Sony Santa Monica fully understands how its players want to interact with its game, and I was always thankful for that understanding.

Considering the player at every moment extends to the exceptional level design, as well. Whether visiting new versions of old locations or entirely new realms, each area wraps around itself to reveal shortcuts, or bypasses the need to backtrack. The well-designed combat arenas feature multiple levels to fight on and environmental attack options, like grabbing a giant rock to fling at that particularly pesky lizard. Even the way the player camera moves to hint at optional chests or tease new paths is impressive and consistent. The players’ direction is always considered.

God of War Ragnarök feels a lot like God of War (2018), which is a compliment considering how fantastic that game is. Sony Santa Monica was right to not break what wasn’t broken and it has expertly continued the story threads that were left hanging from the previous game. Any complaints about the overall experience (familiar combat, collecting and leveling up equipment isn’t particularly interesting) are quickly forgotten in the face of the compelling narrative, believable character relationships, and incredible visuals and animation. Even from its early PlayStation 2 days, the God of War series has always set a high, quality bar for itself, and with few exceptions, it manages to leap above that bar. God of War Ragnarök is no different.