The demand for smartphone-based controllers has increased over the past few years, with several companies developing solid mobile gaming controllers. They range from large, Bluetooth-based replicants that sport a “classic” design to split variants that attach to phones in a manner akin to Nintendo’s Joy Con. The aim is to provide a method of play that seasoned players are used to – a feat that the Gamevice Flex accomplishes with ease.

The Gamevice Flex is the latest version of Gamevice’s mobile controller. Available for iOS and Android phones, it features a newly improved frame that proved to be more comfortable to hold. The Flex is lightweight – weighing 0.4lbs, it’s only slightly heavier than the previous model – and modest in size, with dimensions sitting at 5.6 x 4.0 x 1.3 in. The original split design, with an adjustable rubber-based bridge that allows both sides to clamp onto the ends of a phone, is still present. The Flex’s thick textured plastic feels as durable as ever, and it still sports a USB Type-C passthrough charging port, making it possible to charge while using the controller.

What’s changed is how everything fits together, sans a new port and adapter system (more on that later). For instance, the lower portions are no longer rounded in a way that increases a phone’s overall real estate. Instead, they extend downward to create a slight dip that apes the form of a regular controller. The same goes for the back of the device, which folds inward a little to offer a better grip. 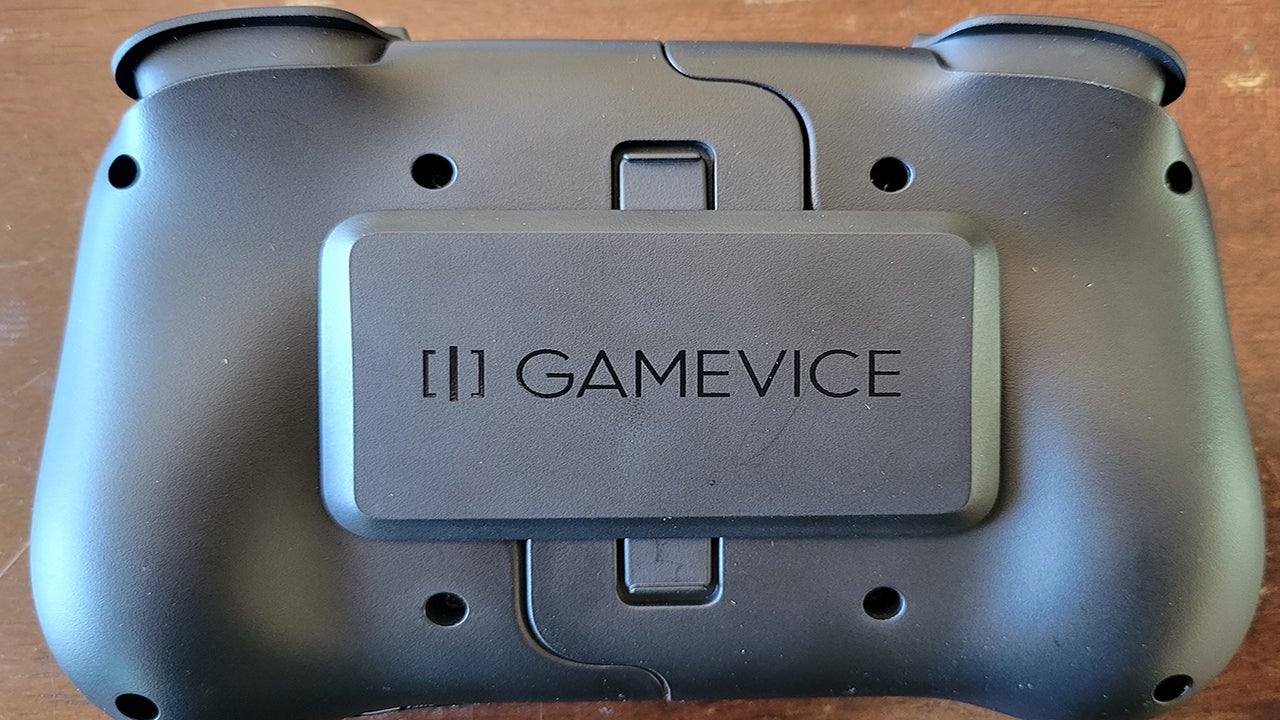 The face buttons and controls have also been upgraded. The ridged thumbsticks better allow for precise movements when playing shooters, while the enhanced D-pad makes competing in fighters a real possibility. The larger Guide, Back, and Menu buttons are better positioned to make them more accessible during play. And the analog buttons that line the top of the Flex are staggered based on height, with the bumpers being slightly higher than the triggers, making it easier to distinguish between them.

An ergonomic form, tweaked button placement, redesigned triggers – all of these slight changes make the Gamevice Flex feel better to hold and use compared to its predecessor. Even better is the inclusion of a 3.5mm audio jack and the new Flex Adapter kit. The audio jack is a boon for anyone who has a smartphone that uses a USB Type C charging port. Previously, unless using Bluetooth, it would be impossible to listen to music or gameplay audio via a headset while also charging the phone. The Gamevice Flex bypasses this issue with the 3.5mm audio jack.

The Flex Adapter kit, meanwhile, was created to provide custom fits for phone cases. Most similar mobile gaming controllers struggle in this category; players will typically have to remove their phone cases before attaching the controller. The Flex kit mitigates this a bit by way of its Adapter Selector and 16 installable adapters. This is done by placing your phone within the selector’s grooves (indicating which adapters to pick) and then snapping them into each side of the Flex controller. Once placed, you should be able to snap the sides onto your phone without having to remove your case first. Removing them is just as easy.

The Gamevice Flex is compatible with iOS and Android phones, the latter of which was used for this review. It’s capable of fitting multiple devices thanks to the adapter kit. Of course, certain phones and cases aren’t compatible; due to its unique design, the Samsung Z Fold series isn’t a good fit for instance. And while it didn’t take much to get the Flex working with my Samsung Galaxy S21, my current case (the ArmadilloTek Vanguard) proved to be too big for the Adapter Selector. That said, with 16 installable adapters to pick from, the Flex is way more accommodating than most mobile gaming controllers. As long as you have Android 10.0 or higher installed first and your phone isn’t oddly shaped or the size of a tablet, you should be fine. 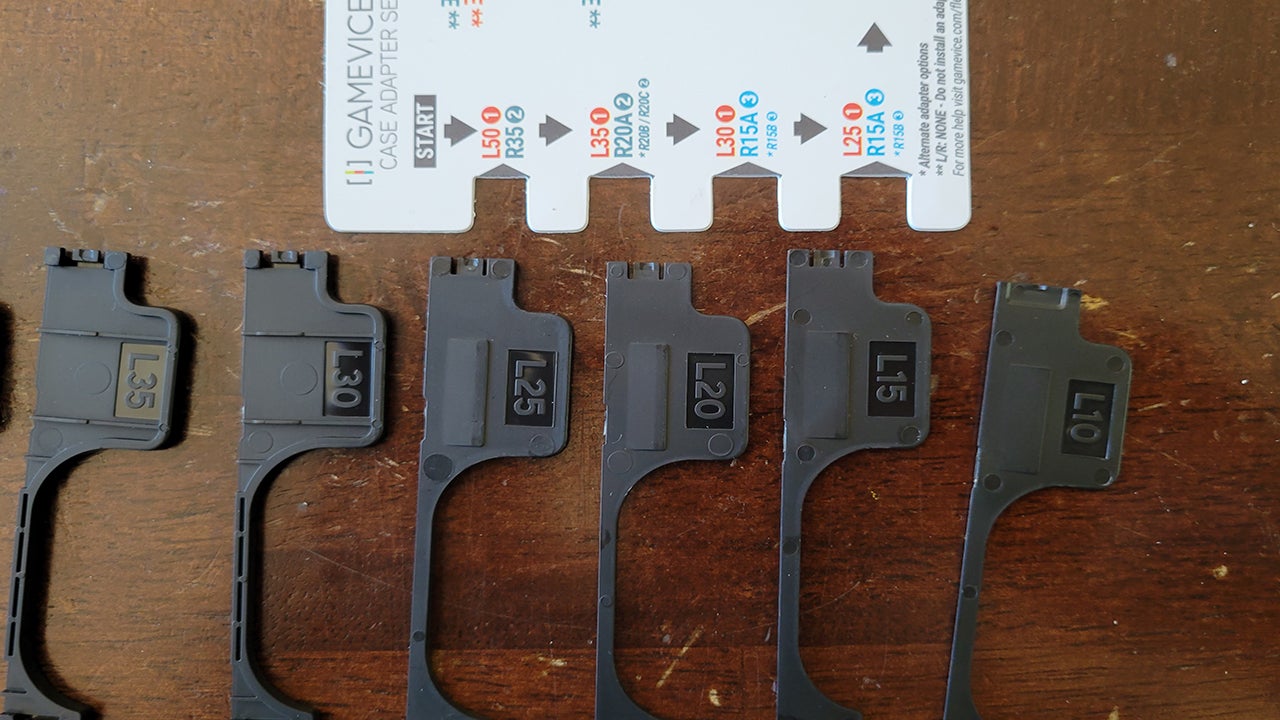 Case or no case, getting the Flex snapped on your phone is a breeze. It only takes a few seconds to unlatch the clasp in the back (separating the controller’s two sides), slot the required adapters, and connect your phone via the Flex’s inner USB Type-C connector. From there, you’d just pull the other side over so that it connects to the top of your phone before starting a game.

Once in a game, the Flex performed wonderfully. The thumbsticks were surprisingly accurate. I did have to adjust the horizontal and vertical speeds when playing games like Halo Infinite. But that had more to do with getting familiar with playing a fast-paced shooter on a phone as opposed to a PC or console; because the controller is so light, quick movements could cause your phone to move about during play. Other genres fared just as good. Snappy, well-placed buttons made everything from Teenage Mutant Ninja Turtles: Shredder's Revenge to The Ascent feel really good to play. The low latency, made possible via the USB connection, also helped in this regard. Jumping from my Xbox Series X to my phone, I honestly never missed a beat.

The ergonomic design helped when it came to longer gaming sessions. Having the USB Type-C and 3.5mm audio ports on the bottom of either side kept the associated cords out of the way. And the fact that the Flex is so light, even while attached to my phone, I didn’t have trouble holding it for long periods at a time. Even after several hours of play, I never really experienced any cramping or major fatigue.

I spent most of my time playing games through the Xbox Cloud Gaming (Beta) and Remote Play via my Series X. That said, the Flex can be used with most any cloud gaming service. That includes Amazon Luna, GeForce Now and the now defunct Google Stadia. Basically, you can use any service that’ll send games to your phone with controller support.

The only real issue I ran into while using the Flex were games that mainly utilize Bluetooth-supported controllers failing to recognize it. Because the Flex isn’t configured to work with these games (besides being connected to a phone) it tends not to work. So, while I was able to play Diablo Immortal without much fuss, I couldn’t get the Flex to work with Call of Duty: Mobile. To be fair, this is a limitation for all USB C controllers that aren’t specifically mapped to play these games; the Razer Kishi had the same problem concerning CoD: Mobile at launch. This potential limitation is worth keeping in mind though when looking to purchase the Flex.

The Android and iOS versions of the Gamevice Flex can be pre-ordered directly from Gamevice for $99.95 and $109.95 respectively.