As part of IGN’s State of Streaming event, we’re taking a fresh look at the major streaming services and what they offer subscribers in 2022. You can check out our initial thoughts on the Disney+ streaming platform as of 2019, and see what’s changed (for better or worse) in this updated review.

It's been a rougher year than usual for your favorite giant streamers as there's now more competition than ever, and consumers, facing a stark saturation point, saw Netflix playing defense for the first time in a decade as Disney+ is now close to catching up, subscriber-wise (and HBO Max is in chaos due to the Warner Bros. Discovery merger).

And with Disney+ on the precipice of raising prices for their ad-free tier (timed to coincide with many customers' pre-paid three-year subscription deal running out), it's time to check back in with the House of Mouse's main hub for all things Disney, Pixar, Marvel, and Star Wars.

Disney+ was kept afloat by Baby Grogu for its first year or so but ever since WandaVision launched in January of 2021, the streamer's been a non-stop parade of Phase 4 MCU programming — from Loki to Hawkeye to Ms. Marvel to the recently launched She-Hulk. Those series, mixed with intermittent Star Wars adventures (like Obi-Wan Kenobi and the upcoming Andor), Pixar exclusives (like Luca and Turning Red), and dozens of documentaries and original series, make Disney+ a very focused fandom destination. So how does it stack up against the other streamers? Let's dig into it. 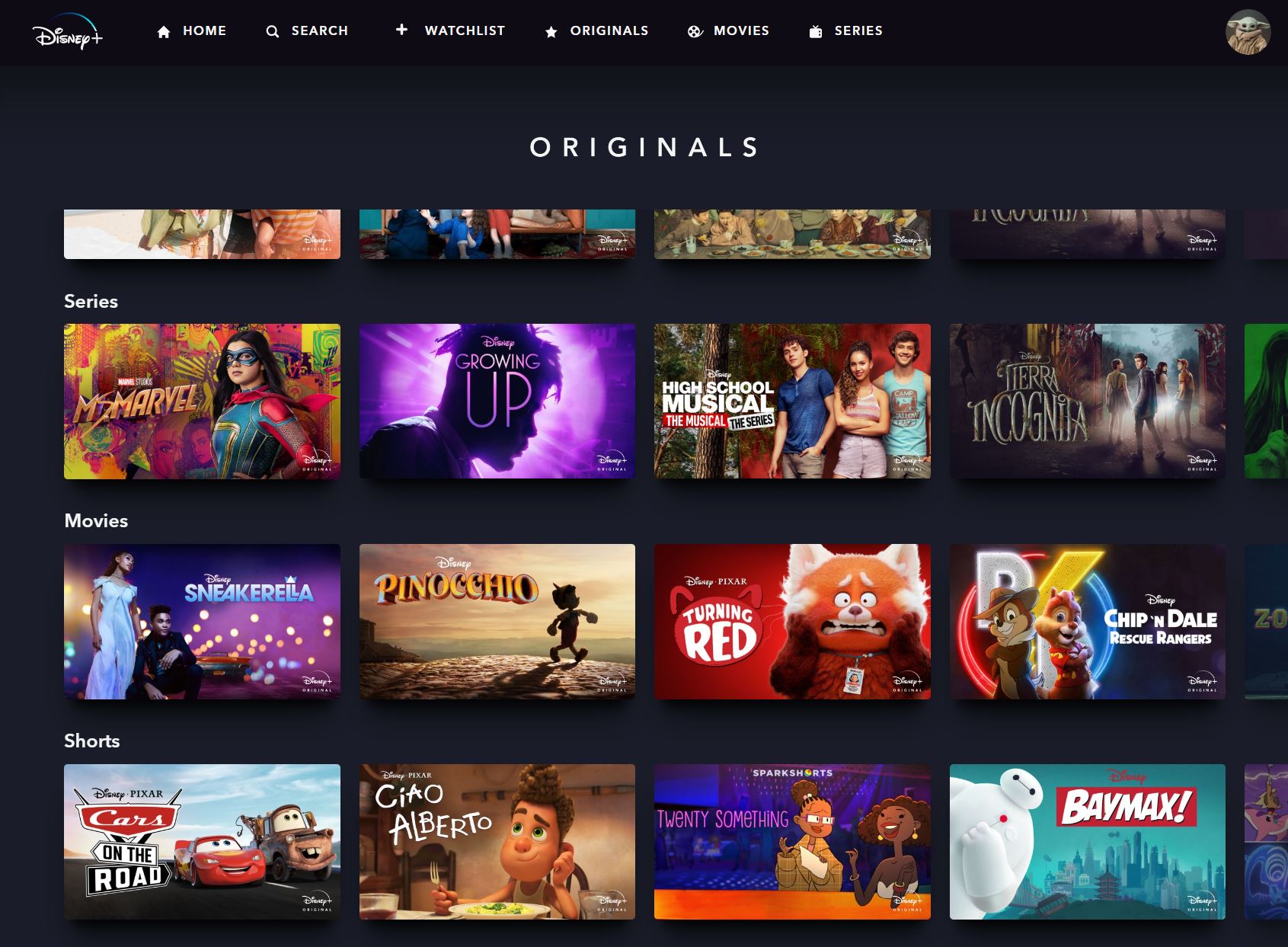 Disney+ in the U.S., which is where this review is being conducted, has a very deliberate tone. Yes, despite slowly adding more mature content (which would find itself censored) — to the point where, this summer, Deadpool, Deadpool 2, and Logan all arrived on the site — Disney+ is meant to mostly feature family fare, with a tremendous amount of kids' programming and an unrivaled catalogue of animated movies and shorts.

The name of the game, however, is still the juggernaut that is Marvel, which has dominated its endeavors on the original programming front for almost two years. Plus, beginning with Phase 4's Shang-Chi: The Legend of the Ten Rings in 2021, Disney+ also gets Marvel's big tentpole movies 45 days after they hit theaters.

Right now, the MCU — sans Spider-Man's solo movies (which are distributed by Sony) and 2008's The Incredible Hulk — is ready to binge at any time, with various user columns separating the movies by hero, phase, chronology, and other amusing methods of sorting. Included in all of this too, after the fun Marvel Studios: Assembled behind-the-scenes documentaries, are what are being called Marvel Legacy Movies, which are the non-MCU X-Men and Fantastic Four films.

What we said about Disney+ when it first launched in 2019

IGN's David Griffin gave the Disney+ streaming service an 8/10, saying, "while Disney Plus’ launch week technical issues are difficult to ignore, its impressive lineup of old and new movies and TV shows is reason enough for any Disney fan to subscribe. There are still a few UI tweaks that the streamer could implement for a more seamless experience, especially when trying to add programs to the library. But thanks to 4K streaming at no extra charge and the ability to download titles for offline viewing, Disney Plus is well-positioned to compete with any streaming service out there."

An argument could be made that MCU shows take up too much oxygen, in the sense that they overshadow much of Disney+'s other original offerings — like its Nat Geo docs about Jacques Cousteau and Evel Knievel, its industry-centric deep dives like Behind the Attraction and Light & Magic, or its YA content like Stargirl and Artemis Fowl — but those bread and butter Marvel shows are also steering the ship, as it were, whetting appetites for upcoming fantasy revivals like Willow and Percy Jackson, which line up tonally despite not slotting into a Marvel or Star Wars homepage. Disney, and its various mega-brands, has its hooks in both children and adults so it's a service that can nicely suit a crowded household.

Back at launch, fans seemed to be a bit more excited about the bountiful back-catalog of classic Disney films that had now become available, as they leaped into the deep end of the pool and binged offerings from the company's Golden (Snow White, Fantasia), Silver (Peter Pan, Sleeping Beauty), and Bronze (The Aristocats, The Rescuers) animation ages as well as live-action family adventures like 20,000 Leagues Under the Sea, Bedknobs and Broomsticks, and The Black Hole.

With Fox properties like Deadpool arriving on Disney+, parental controls have become a bigger topic of conversation

The novelty of having these titles at your fingertips may have worn off over the past three years but it doesn't take away from Disney+'s impressive and unique well of content. Those seeking adult prestige TV and film dramas — like you'd find on premium cable — might find the streamer lacking, of course. Here in the States, aside from a few new exceptions that can be controlled/managed by parents if need be, Disney+ has a ceiling for mature content. Annual showcase event Disney+ Day, on Sept. 8, along with being the streaming premiere date for Robert Zemeckis' new live-action Pinocchio starring Tom Hanks (as well as Thor: Love & Thunder), will be used to announce new projects and give updates on upcoming originals (and hopefully not like last year's disastrous Twitter threading). 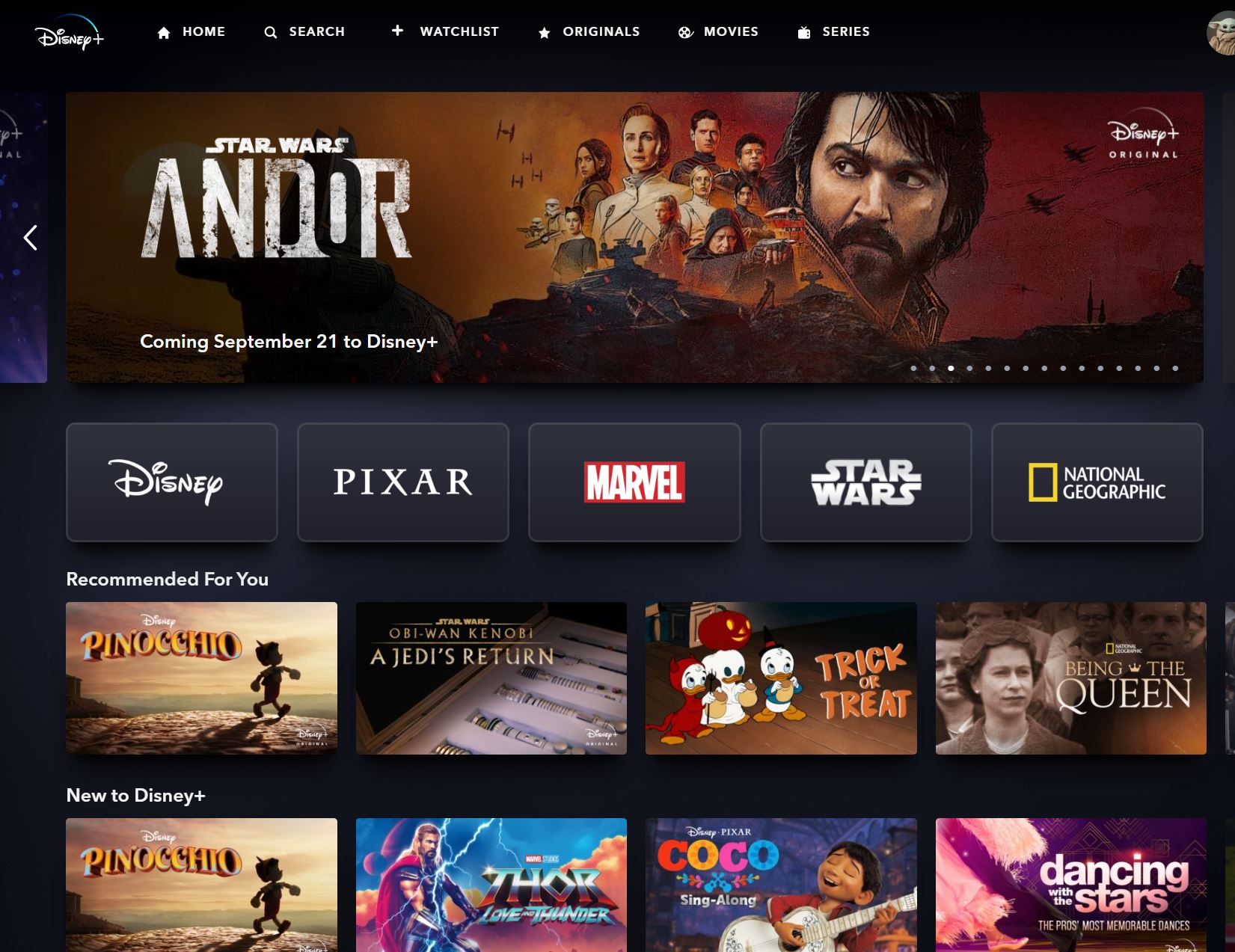 Disney+'s interface hasn't changed all that much since launch, still utilizing a homepage featuring the latest releases' scroll menu, five main hubs (for Disney, Pixar, Marvel, Star Wars, and Nat Geo), and then a dozen or so themed columns below. It's clean, easy to move a cursor through (and also easy to see what you're highlighting), and unchallenging to navigate (as it's, understandably, meant for children too). It's also very minimal and the site's larger vault of content isn't readily accessible from these columns.

Heading over to the left, to the actual movie and TV sections, allows for a much more expansive exploration of content, including headers for which items are available in IMAX aspect ratio, 4K resolution, and HD (at no extra cost). As it stands, though, Disney+'s interface is built for those looking for the newest and brightest features, and having them within easy reach. The service releases weekly episodes of shows so it's built for those headed there to see a very specific thing. It's elegant yet minimal.

Among the rows on the homepage you'll find Recommended For You, New to Disney+, a not too buried Continue Watching column, an Originals section, and then just wild card groupings that unfortunately breed a lot of repetition. Your craftable watchlist is accessible from the left-side column and items can be added to it by clicking on the film or show's main page "+" button (though some other streamers make it even easier than that). Disney+ is available on many devices, including web browsers, game consoles, and iOS and Android phones.

Given that Fox properties like Deadpool have arrived on the service (as well as The Orville), Parental Controls have become a much bigger topic of conversation. As of right now, it doesn't seem like Disney+ has a way to block specific movies but it does allow the creation of a Kid's profile (which filters out adult content) as well as PIN-protected regular profiles to prevent children from logging onto their parents' pages. You can also create a password block for the creation of new profiles. All in all, it feels like there should be an easier way to manage this but right now there are only a handful of movies to truly fret about if you want to shield the younglings.

Are there other various bits and bobs people would like to see fixed or improved? Of course. These things also vary depending on how you're accessing Disney+ (TV, console, mobile, etc.) but the UI's messaging is somewhat clear. It focuses wholly on what's driving subscriptions and helping make Disney, as of August, the number one streamer in the entire world (that's Disney+, Hulu, and ESPN+ combined). 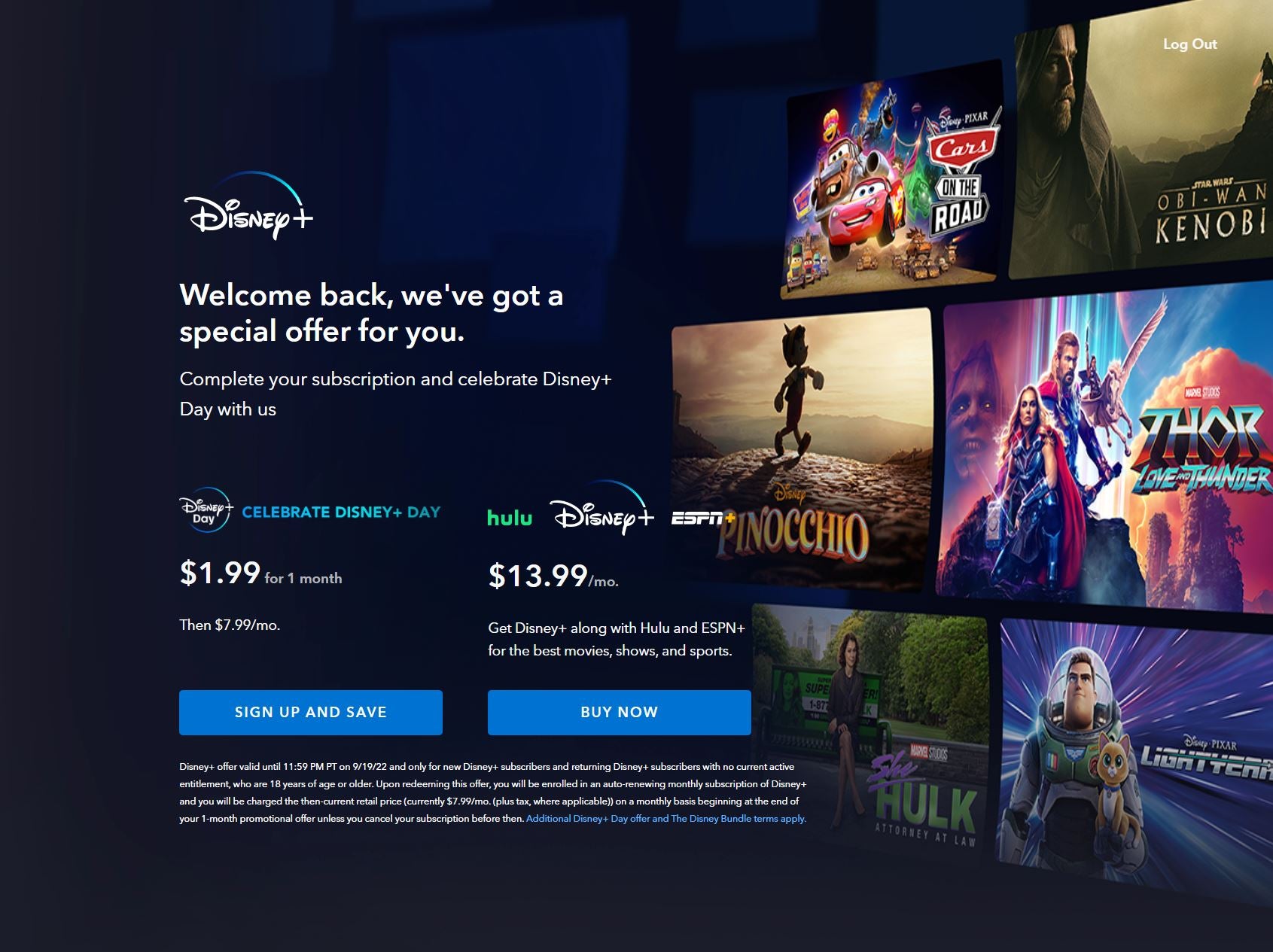 Disney+ started out with a very modest monthly rate of $6.99 (plus the option of a D+/Hulu/ESPN+ bundle $12.99 per month). Things are about to change, though, and this MCU Factory is about to get pricy. As many streamers try to find a way to actually be profitable (which is causing a lot of the calamity with HBO Max right now), things will now take a tumble back to where this all started — cable television. Yes, we've already had many streamers realize the weekly episode model works best for their content but now these disrupters are also cycling back toward ad-supported tiers. Netflix's ad-supported layering will come in early 2023 while Disney+ looks to kick things off on Dec. 8.

What we're looking at is a raise to the ad-free subscription price, now called "Premium," at a cost of $10.99 a month. The price we currently pay for ad-free, $7.99 a month, will now be the ad-supported version. So Disney's not introducing a cheaper ad-filled tier, just raising the price of the ad-free one.