A Side Of Captain America We Haven't Seen: New Details On Skydance's Marvel Game 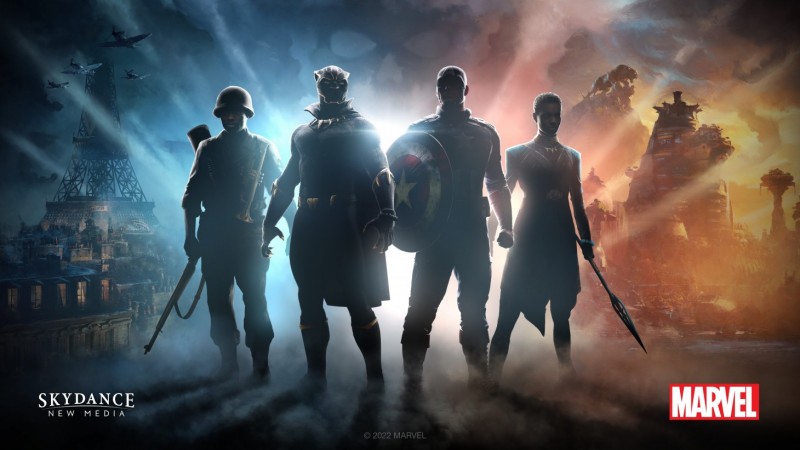 In the world of Marvel Comics, the word “ensemble” invokes thoughts of the Avengers, X-Men, or Fantastic Four. Recently, we learned Skydance New Media and Marvel Entertainment were working on an ensemble Marvel video game. The internet’s rumor mill believed this game would focus on Reed Richards and his fantastic family. Yesterday, during the Disney & Marvel Games Showcase, we learned this ensemble wasn’t Fantastic Four, Avengers, or any known Marvel team whatsoever. Skydance is creating its own team of four heroes, set to the backdrop of World War II.

The timeframe has Captain America front and center fighting against Hydra and Nazi troops. Through a narrative twist, Wakanda gets involved, and players gain control of Black Panther, but not the one you know. This Black Panther is Azzuri, T-Challa’s grandfather. If you think that’s a deep cut into Marvel lore, the other two characters are even lesser known. From the Howling Commandos, players will suit up as Gabriel Jones, who plays a mean trumpet in the comics. The fourth character is Nanali, the leader of a new Wakandan spy network, who has only been in a few comics.

The most puzzling aspect of this game’s reveal is the lack of a name. Following the announcement, I sat down with Amy Hennig, Skydance New Media’s president, and Marc Bernardin, Skydance’s story consultant. I asked them why they decided to announce a project without a name.

“Names take time,” Hennig says with a smile. “We want to go through this process carefully and not rush it. We are telling an original story, so there is not a book or title or team we can immediately point to. Coming up with a title that lands like a Marvel title lands and is original is no small feat. And then you realize Marvel has been around for a long time, and they have used every single word you might think of. We took ourselves off the hook for that and focused on the tagline.”

Skydance’s focus is to make this superhero experience as widely accessible as possible, hoping that anyone can play it from start to finish. When asked about inspiration points for this odd ensemble, Hennig cited films with men on a mission, such as Dirty Dozen. “Marvel characters in that time period felt immediately appealing,” she adds. “We love the idea of exploring the Black Panther of that era. What was Wakanda of the 1940s when they were hidden away from the world? How would they react to these World Wars on their borders and continent? And the debate of whether they can remain neutral and sit on the sidelines when the entire world is at war.”

Bernardin also says that we’ll see different sides of Steve Rogers, who is just learning to be a leader. “We haven’t seen who Steve Rogers is in the bulk of World War II. The comics dipped into that territory a bit, but we haven’t seen that onscreen. What makes them heroes? And how do we comprise that and continue kicking them in the shins and force them into places they don’t want to be operating from.”

The other two characters, Jones and Nanali, give players non-superhero perspectives into the two worlds. All four characters are playable at specific points in the story. The setup of four heroes usually points to a cooperative game or an asymmetrical one, yet Hennig clarifies that the game will be a linear single-player experience. “That’s why the Uncharted shorthand is helpful,” she says. That means chapter based with cinematics. It won’t be designed exactly like the Uncharted games. This is a unique experience with four wildly different viewpoints into Marvel’s history.

When asked if this Marvel story would give us different takes on the heroes like Insomniac’s  Spider-Man games, Hennig said they are pulling for all existing Marvel lore. “We want it to feel true to all of it, but not adhere to a specific one,” she says. “We haven’t gotten the chance to get to know Steve Rogers as a young man, freshly transformed and freshly in uniform.”

“Whenever we have seen Steve Rogers at this point, he’s been pure of heart,” Bernardin adds. “He’s a knight on a steed, but we didn’t get the sense that he went through officer training school. Nobody taught him how to be a leader. He has natural gifts, but there’s a learning process. How does he build a team? We’re finding ways to push him.”

Hennig and Bernardin didn’t reveal much about Azzuri but did say he’s older than the version of T-Challa comic and movie readers know.

“I’m excited about this studio,” Hennig says. “I’m excited about this game. We’re building on our experiences of telling action-packed cinematic adventures. We’re changing things within the mechanics and controls that will feel fresh for long-time players and welcoming to people who have always wanted to pick up a controller but may have felt intimidated that a game wasn’t for them. We’re trying to crack that problem of creating a game where you feel like you are embodying these characters and choreographing the experience from moment to moment, instead of feeling like a logistical, tactical game that you have to beat. We are looking at games that make you feel like you are entering an experiential flow state instead of managing skill trees. People who have played it have said they’ve lost themselves in our experience because the game was doing what they intended instead of fighting them.”