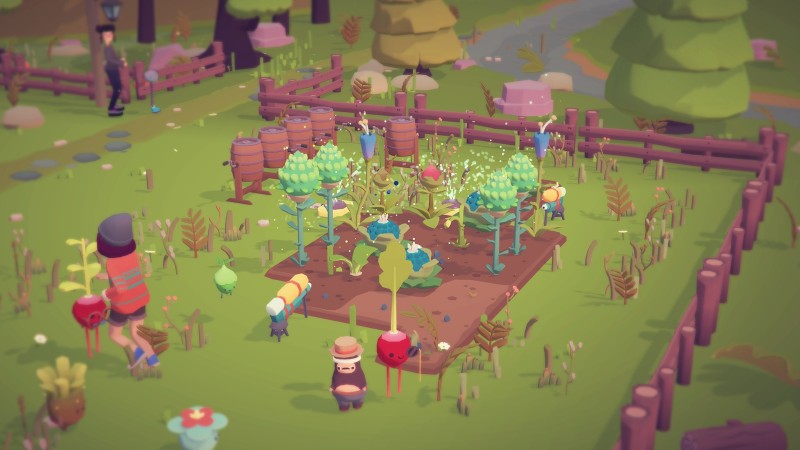 Ooblets offers a smile-inducing amalgamation of monster collecting, farming simulation, and relationship building. However, this delightful chill pill becomes tougher to swallow thanks to a tedious, grind-heavy progression that tests your patience in less enjoyable ways.

The adventure whisks players to Badgetown, a quirky village where residents harmoniously live alongside Pokémon-esque creatures called Ooblets. Despite your newcomer status, the townsfolks turn to you to restore the city to its former glory. That involves tasks such as reopening buildings and cleaning up trash, all while making friends along the way. In many ways, Ooblets feels like a more purpose-driven Animal Crossing, which appealed to me as someone who prefers working towards tangible goals.

Checking off your to-do list requires the help of Ooblets. These critters serve as partners and protectors and come in many species and rarities. Though cute, some of their designs feel uninspired. For every spring-legged jellyfish, there’s an Ooblet best described as a “mushroom with a smiley face” or “a plain bird.” Instead of catching Ooblets, you must obtain their seeds, then grow one on your farm. How do you get seeds? By defeating Ooblets in dance battles, the game’s humorous spin on turn-based combat.

Dance battles pit squads as large as six Ooblets against each other. Commands take the form of cards, adding an element of randomness. Many cards sport a point value, and the goal is to play enough to reach a total value, represented by a meter, before your opponent. However, you can only play a certain amount of cards each turn based on how many Beats (basically mana points) they require. You don’t build your deck; instead, you have a permanent selection of general-use cards with Ooblets bringing unique abilities, thus dictating your line-up. One Ooblet burdens the opponent’s deck with useless cards, another focuses on weakening their attack power, while others raise your card’s power by generating Hype.

Despite the strategic elements, dance battles are a walk in the park. I never lost one in over 30 hours of playing, and it never mattered what combination of Ooblets I used since the A.I. rarely plays aggressively. I wish dance battles challenged me more because they became an uninteresting formality, especially during quests where you must complete multiple bouts in a row. However, I respect the battle system as a cute, non-violent introduction to turn-based combat for younger or inexperienced players.

Thankfully, the bulk of the experience unfolds on your farm. In addition to growing new Ooblets, you cultivate crops by plowing land and keeping it watered. This became my favorite part of Ooblets. I enjoyed designing my farm and concocting systems to produce crops as optimally as possible (which sometimes takes days). It gets even better once you construct tools to make the job more autonomous, such as automatic sprinklers. You can also assign extra Ooblets to your farm to tend to responsibilities like pulling weeds or harvesting the ripe yield while you’re away, providing a nice incentive to obtain as many of these little helpers as possible.

Farming crops and gathering materials, whether plucking them from the earth, fishing them out of the sea, or recycling them out of trash, is pivotal to Ooblet’s progression. Every major task requires players to deliver bundles of materials, whether you’re restoring Badgetown’s clubhouses, repairing a hot air balloon to travel to new cities, or fulfilling a ton of fetch quests. Having a bit of everything on you at all times matters; you can’t even challenge Ooblets to dance battles unless you’re carrying a specific crop or a dish made from them. Running into new Ooblets loses its excitement when they require a vegetable you left in storage, forcing you to trek back home.

Quests began to lose their appeal once I realized they’re the same, sometimes lengthy, exercise of growing or scavenging materials. This often left me at the mercy of meters and the clock, creating stretches where I meandered with few substantial options until a vital resource sprouted or replenished itself. Additionally, these progression roadblocks sometimes go overboard. One campaign mission required me to grind hundreds of precious Gummies, the game’s currency, to pay an arcade hacker. Another job repeatedly forced me to climb up and down a mountain path gated by NPCs whose requests could only be satisfied by returning home. Having some tasks rewarded with Wishies, a secondary currency spent on upgrades, helps but it’s not enough.

Other elements and activities don’t entirely click either. Running a shop feels needlessly tedious since batches of items can only be sold in single quantities, making restocking a hassle. Making the rounds to chat up the same group of citizens each day to build friendship meters, which unlock decent rewards, also loses its appeal. I began to avoid the Dance Barn, which hosts dance battle tournaments to win a daily prize, due to my boredom with the combat. Locations beyond Badgetown offer little incentive to revisit them once you wrap up their campaign quests, outside of collecting missing Ooblets. Given how crucial eating food is to keep your energy up, a meter that drains throughout the day and fuels many basic actions, I was annoyed that snacks couldn’t be consumed without entering the menu, even when equipped.

Ooblets offers solid fun, and I enjoy its cheerful tone. I only wish playing it didn’t feel so much like work. Despite the pride I had in my farm, clearing checklists eventually felt more laborious than satisfying. There’s fun to be had as long as you’re willing to work for it.