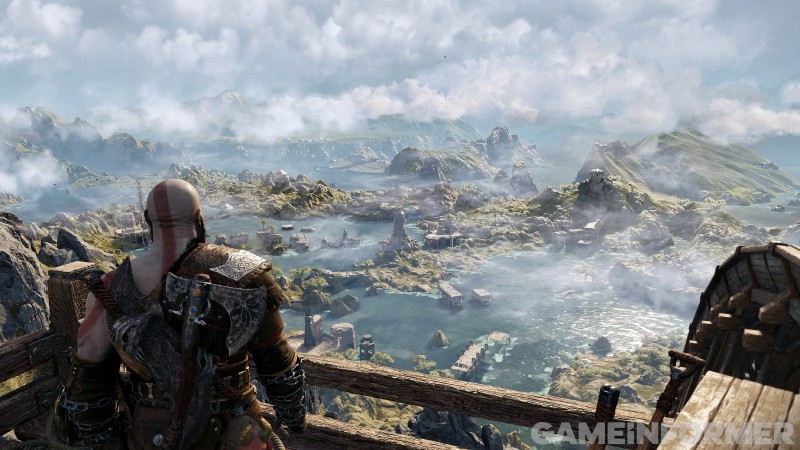 A powerful sense of discovery drove players to chart courses throughout God of War 2018’s map. Winding footpaths led to expansive hubs at a scale unlike previous games in the franchise. Ornate chests holding rare equipment and Jötnar Shrines with lore murals were just some of the items awaiting wide-eyed players across six realms. Golden path locales like Midgard and its massive Lake of the Nine, Alfheim, home to light and dark elves, Helheim, the underworld, and Jötunheim, the land of Giants, were sprawling zones in their own right, filled with enough content to keep players engaged. Yet, the optional but equally impressive Niflheim and Muspelheim realms pushed player skills to the limit with vigorous combat trials. Despite the size and myriad navigable backdrops, the Norse universe felt connected. Odin barred access to Asgard, Vanaheim, and Svartalfheim, but Ragnarök director Eric Williams says players will get to explore all nine realms in the sequel and that “The ones you’ve seen before are going to feel new again.”

The frostbitten forest from God of War 2018’s early hours is just as everyone remembers, but Fimbulwinter’s frigid grasp extends beyond Kratos and Atreus’ home region. The Lake of the Nine is frozen solid, requiring unconventional transportation methods. Enter: Speki and Svanna, sled wolves that transfer the characters from one far-off point to the next. In verdant areas, players must once again paddle down serpentine streams or trudge through open waters in a canoe, but these various means of travel suggest a journey vaster and bolder than what came before. 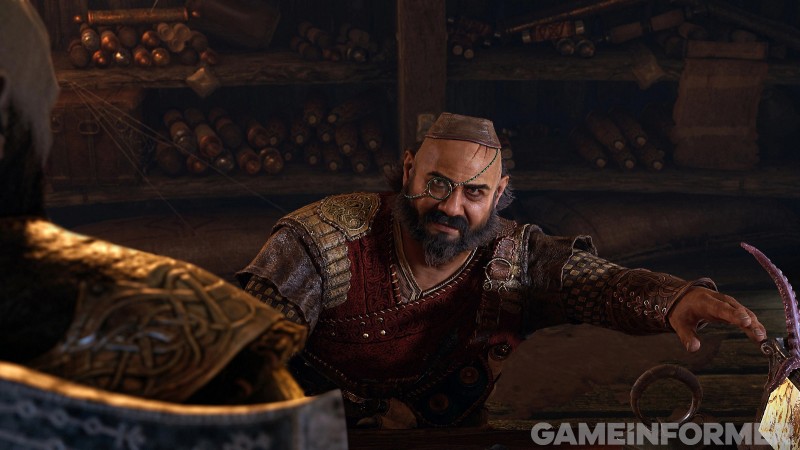 Kratos and Atreus will encounter Durlin in Svartalfheim, but how he factors into their latest odyssey is still anyone’s guess.

The exclusive footage I watched of the dwarven realm, Svartalfheim, provided me with more than enough insight into the depth and complexity of Ragnarök’s world. Lead level designer James Riding and level designer Jon Hickenbottom spoke with me about their experience crafting the points of interest, with the former saying, “We wanted to evolve the gameplay in the level spaces – more variety and verticality. In Svartalfheim, you’ve got a lot of places that you go to all within one realm. It’s so much content.”

He’s right. As soon as the video starts, I’m thrust into a maze-like depot brimming with wooden machinery, a technical marvel even by God of War’s fantastical standards. Water sloshes down rickety ducts sectioned off by sluice gates. I spot towering wheels in the distance, and just overhead, an ore block, suspended in the air by a derelict rig, threatens to crush me. Atreus climbs to an elevated ledge, scouts the area, and offers a plan of action, but not before cracking a joke at the expense of his father’s aging knees. Suddenly, the clip jumps forward, and I’m standing on a cliff face with breathtaking views of the entire site. I barely make out the cloudy silhouettes of mountaintops along the horizon. A few feet away, a small chest sparkles, waiting for Kratos to burst in and snatch its well-kept treasure. An abundance of visual cues imply walls are mountable and structures can be acted upon, setting the stage for potentially intricate puzzles.

To best this daunting section of Svartalfheim, players must rely on Kratos’ multifunctional toolset: His weapons and, yes, his son. In the recording, Kratos froze sputtering geysers, dismantled steaming pots, and commanded Atreus to fiddle with out-of-reach devices. When recalling the initial mindset and intentions behind crafting interactions in the new realm, Hickenbottom said, “We wanted to show off the dwarves and what they’ve been doing here. They’re using water to propel and move things. Even throughout the different biomes, you can see the dwarves creating huge environments. And then when Kratos comes in, it’s like, how does he bend the environment to his will?”

During the final minutes of the B-roll, I watch Kratos and Atreus row past a cavern and into a dwarven metropolis. The boy is stunned, and Mimir triumphantly announces, “Welcome to Niðavellir, brothers.” Afternoon half-light falls warmly against the river’s surface, and multistorey hovels stand proudly beneath a swaying tree line. Sadly, this magical moment comes and goes. An alarm shatters the tranquility, and dwarven citizens, once carrying out their duties, flee the idyllic vista. Even in a place ostensibly removed from the immediate effects of Fimbulwinter, peace is short-lived. This brief glimpse solidifies the enormity of the task at hand and what’s under threat.

“It was a little lonely in the last game,” Riding says. “So, specifically with Svartalfheim, we’re trying to show this lived world. There are things here besides just you two.”

But friendly dwarves aren’t the only locals. Less reputable beings roam the countrysides and lurk in dark grottoes. Kratos and Atreus will need to rely on brute force while also using each set piece to their advantage.

This article originally appeared in Issue 349 of Game Informer.