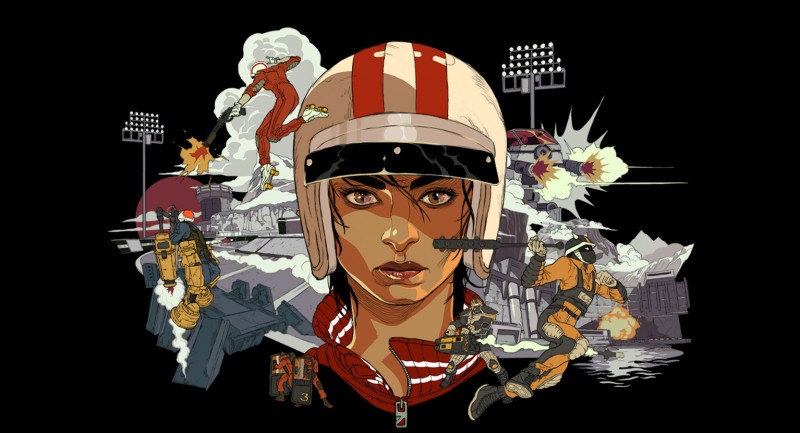 My roller skates come to life, whirling loudly on concrete before drowning out to the murderous symphony of shotgun blasts and rocket explosions. I spin to avoid a hail of bullets, latch my skates onto a rail, and then flip through the air, my guns blazing as I perform a flashy trick to bring the crowd to its feet. I hope this run creates a big enough death combo to reach a high score and unlock the next stage, where more powerful weapons and foes await. This is Rollerdrome, a skating-shooter that blends the trick system of Tony Hawk’s Pro Skater with the kill chains of Doom 2016 to create an exciting dystopian experience that makes you feel like a god on wheels.

Roll7, the team behind the OlliOlli series, is locked in on every aspect of this game, delivering enticing skating freedom, challenges that require devotion, comic-book visuals that leap off the screen, and a fascinating science-fiction vision stripped right out of 1970s cinema. Rollerdrome is a love letter to James Caan’s classic film Rollerball, following the same theme of corporations ruling the planet and using the poor as contestants in a blood sport. Even the skaters’ uniforms are similar in design and color. The retro vibe and inspirations work well to create a fascinating backdrop to skate to. When playing Rollerdrome, the comparison points to other games and entertainment are crystal clear, but they unite to create something unique. 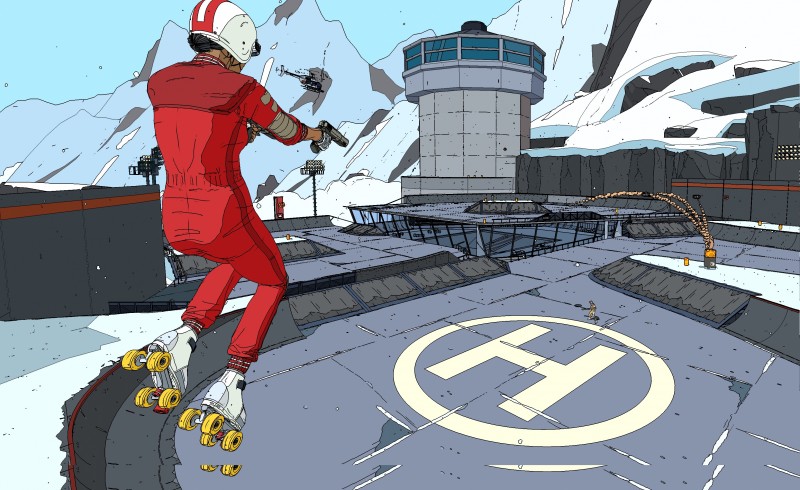 The concept of the gameplay is simple: Skate or die. If you stop moving, a sniper will pick you off, or a mech will blow you to kingdom come. You travel the globe to different arenas, each designed like a skate park with a sea of ramps and rails to help you gain speed and soar. You use these playgrounds to earn advantage points to attack militant groups hired by mega-corporations. They are disposable and are here to highlight the skills of the contestants. You assume the role of a rookie named Kara Hassan, who you never get a good look at since her back is always to you and she’s wearing a helmet, but her skills are undeniable and, more importantly, great fun to display.

When Kara rips into an area, chaos hits to thunderous applause and doesn’t relent until the last body collapses to the floor. Her movements are swift and fluid, and the most significant actions are easy to perform, such as launching off a half pipe or spinning through the air while simultaneously firing a machinegun. Roll7 did a phenomenal job with the controls, making them intuitive to the point that they quickly become muscle memory and don’t require much more than a single button press. The timing windows for specific moves are also fantastic, making evading sniper fire not just a cinch but an integral part of the combo system. If you can perform a perfect evade, your point total ticks up.

In the first few levels, I skated with the sole intent of winning and moving on to the next stage. But the game’s progression system requires more than this. To reach the second tier of stages, Kara must first complete a specific number of mini objectives. These tasks range from achieving high scores to downing specific enemy types in particular ways. These goals are Pro Skater-like but do lead to some frustration if you don’t want to try your hand in the same battles numerous times.

I felt a little frustration in the later levels, yet I adored how the challenges pushed me to find and execute huge combo strings to reach higher scores. The combo meter multiplier only advances on kills, so you must figure out how to reach and kill enemies in a timely order. These foes spawn across the arena, and your ammo reserve only replenishes when you perform tricks, so you are constantly trying to dazzle the crowd or down an adversary. It’s a phenomenal mix of two distinct gaming disciplines. The gunplay fits nicely with the skating, thanks to one of the most generous lock-on targeting systems you’ll see. The focus is on gaining ammo and timing shots, which is fantastic given your character’s breakneck speed and them often being airborne.

The retro sci-fi setting fits the action, but don’t expect much from the story. You’ll hear voices in the locker room that advance specific plot points and gain more insight into the world through notes and newspaper clippings, but they don’t add up to much – all the excitement is in the arena.

Rollerdrome immediately clicked with me, and I ate it all up. As polished and fun as the experience is, it feels like Roll7 is just dipping its toes into the water. I hope this talented studio gets the chance to make a sequel to further flesh out this unique concept with more detail in the story and greater player progression. Regardless, Rollerdrome is a fantastic first foot forward. I adored the campaign gameplay and have a feeling my friend group will use this unique title for late-night scoring competitions.