If you grew up reading gaming magazines in the 90s, you might be familiar with full-page advertisements claiming that a game would cause any variety of extreme maladies. Eyelids being ripped off your face, thumbs and palms becoming bloodied, and, in the most severe cases, full cranial explosions. After one of my many late nights with Neon White, I finally felt like that dream of 90s game ads had become a reality. It actually felt like my eyeballs were vibrating enough to potentially pop and dribble down my face in a radical fashion.

Designed by Ben Esposito of Donut County, Neon White takes the bite-sized speedrun approach of Astro’s Playroom and expands on it tenfold. I had to stop playing Astro at times to ice my wrists and forearms; I have to avoid playing Neon White within an hour of sleeping because of a potent mix of adrenaline and a tendency to become preoccupied with pondering the optimal routes through the levels I just played. 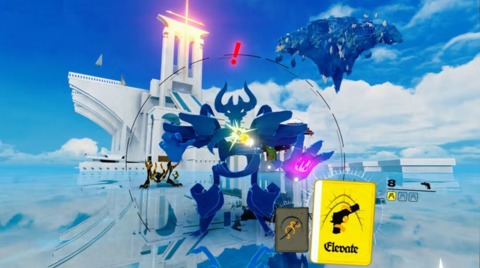 Speedrun-focused games aren’t a new concept, but Neon White takes a decidedly novel approach to its 121 stages. It’s part first-person shooter, part resource management, and part puzzle game. Your resources take the form of various cards, each of which features a firing mode and a discard ability. The yellow card, for example, is a pistol that you can fire at range to kill enemies, but when discarded it functions as a double jump. Similarly, the uzi is also a bomb that can take out multiple enemies at once, but its shockwave can propel you up walls or across gaps if you’re positioned correctly. A rocket launcher can take out groups of enemies but can also function as a grappling hook.

Each level has a finite amount of cards, and there’s a great deal of satisfaction that comes from tinkering with them and figuring out the best way to use them. Maybe you can shoot that group of enemies with your uzi in lieu of bombing them – after all, that bomb could launch you over a wall and shave several seconds off your time if you’re able to hold onto it a little longer. Instead of discarding your blue rocket launcher card for its grappling hook ability, try crossing that gap by rocket jumping and saving your grappling hook for a bold shortcut opportunity later in the level. Cards are deliberately laid out in a natural path through each level, but the optimal route is rarely the obvious one.

If you were to watch a solid run of any Neon White stage, you’d be forgiven for thinking it seems overwhelming. But thanks to its straightforward controls, smart card placement, and drip feed of new weapons and concepts, it makes it easy to recognize and remember the tools at your disposal. If you really want to attack your friends leaderboard, however, you’ll want to use keyboard and mouse controls. Using a controller is great if you want to take your time to learn levels or find hidden collectibles, but there’s a pace to the game’s action that begs for more precise control when climbing the competitive ranks.

Playing on Switch or Steam Deck does offer gyroscope support, which works well and is a major step up from purely analog controls. It’s also way easier to climb the leaderboards on Switch, but I’d only recommend that version if it’s your only option. Its visuals are significantly muddier, though they are high contrast enough that the graphical muddiness won’t affect your ability to play the game. The longer load times, however, have more of a pronounced effect on the pace of your experience and how quickly you can repeat attempts. When you’re restarting a level as much as you need to in Neon White, you want a Tony Hawk-style rapid restart option. It may only take a couple of seconds (as opposed to the near instantaneous PC restart), but it’s enough to get annoying when you’re biffing the first jump in a level over and over again. 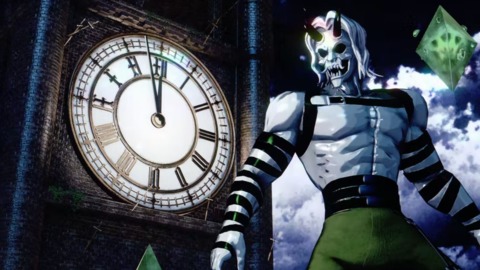 Neon White is almost always played at a blistering pace, but things frequently come to a screeching halt whenever it’s time for characters to chat. This happens far more often than you might expect, with tons of story-related and optional conversations with your fellow “Neons.” These are presented in the style of a visual novel, with gift-giving and relationship meters straight out of something like Hades. Building your relationship with other characters sometimes leads to a unique sidequest level, but it more frequently involves tons of dialogue featuring humor that will be very hit-or-miss with most players. You can activate a fast forward feature if you’re just looking to get back into the action as soon as possible, but it still disrupts the flow of the level-to-level gameplay.

Neon White gets its hooks in deep and fast. I knew within 10 minutes that I loved it, but I appreciated and enjoyed it more as I spent more time with it. My first playthrough was a blast as I discovered new weapons, explored levels, and experimented with shortcuts. But the “real game” felt like it started after I saw the credits. That’s when I started going back to each level, playing them over and over until I achieved the Ace rank, and then played them more just to shave hundredths of a second off so I could climb my friends leaderboard. It feels amazing to see “New Best!” on your time after dozens of attempts, and failing never gets frustrating considering how short the levels are and how quickly you can restart them. Whether you’re looking to best your own runs, compete with your friends, or attempt to make a splash on the global leaderboard, Neon White presents a welcoming on-ramp to the world of speedrunning, offers compelling challenges to overcome for those that want to pick up the pace, and delivers a satisfying gameplay loop regardless of the speed you want to tackle it at.