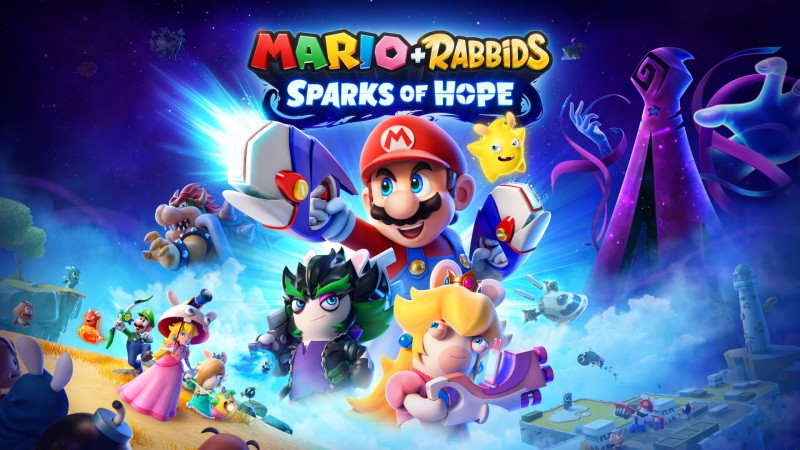 When Mario + Rabbids Kingdom Battle arrived on Switch in 2017, it was an unlikely success that blended the worlds of Nintendo’s Super Mario franchise with Ubisoft’s zany Rabbids. The result was a turn-based tactical title starring the Mushroom Kingdom’s finest and the most unpredictable characters in Ubisoft’s stable. Announced during Nintendo’s E3 2021 Direct, Mario + Rabbids Sparks of Hope promises to carry forward the legacy of that fan-favorite title, but it’s been a while since we’ve heard anything about that game. That changed today during the Nintendo Direct Mini, which shined the spotlight on the company’s third-party partners.

Otherworldly enemies have suddenly appeared, trying to take the energy possessed by Sparks, who appear to be Rabbid versions of the Lumas from Super Mario Galaxy; this would make sense seeing as how Rosalina appears to play a big role in this sequel. To combat this, Mario and his friends once again join forces with the Rabbids.

Like its predecessor, Sparks of Hope battles play out in turn-based fashion, with positioning and attack order playing key roles in determining the outcomes of battles. Prior to firing your characters’ weapons, they can move freely across the battlefield. In a short gameplay demo, we were able to watch a simple battle unfold. Mario, Rabbid Rosalina, and Rabbid Luigi worked together to defeat a group of enemies. By having each character dash into and stun several enemies, Rabbid Luigi was able to take out several opponents at once before Mario blasts two enemies away during his turn. Then, Rabbid Rosalina bounces off a teammate to reach an area further away than she would have gotten to over the course of a single turn. When the enemies take their turn, all the heroes are in cover but Rabbid Luigi, who unfortunately receives the wrath of the enemy fire. When the turn comes back around to Mario, he chucks a Bob-omb to secure the victory.

The trailer ends showing that this time around, Bowser is joining your team. I’m excited to see what powerful attacks and abilities he brings to the table in future demonstrations. We might not have to wait long, though, as if this update wasn’t enough, Nintendo says fans can look forward to learning more through a special Ubisoft showcase, which is scheduled for 9 a.m. Pacific/12 p.m. ET tomorrow. Mario + Rabbids Sparks of Hope comes to Switch on October 20.