If Ubisoft Remakes Assassin’s Creed, It Should Look To Final Fantasy VII 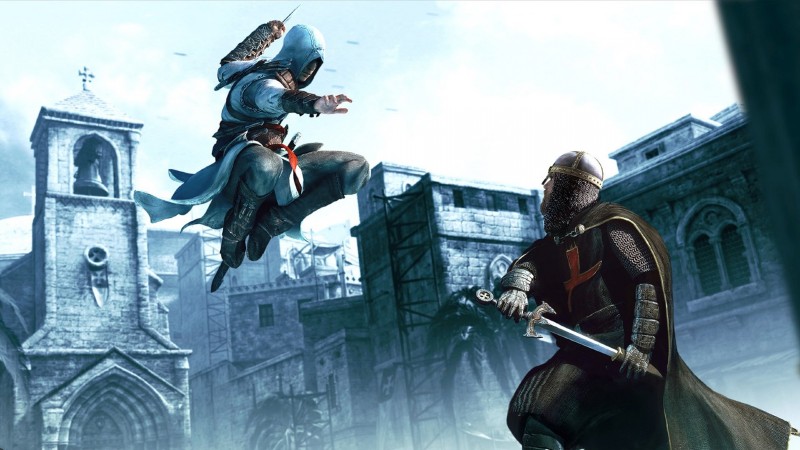 As a bottom line, I’m not opposed to any remake. If a studio wants to take a new crack at an old game, especially if it’s the studio behind the original release, why not? It’s not like I have to buy the game, and who knows, it could be a new favorite for me. That’s what happened with FF7R. I love Final Fantasy 7, and I was worried the remake would not do it justice. Well, it turns out FF7R is one of my favorite games ever. Plus, at the end of the day, in many cases, the original game is still there for me to play should I wish to do that.

However, all this talk and speculation surrounding Final Fantasy VII Rebirth got me thinking about another game rumored to be getting the remake treatment: Assassin’s Creed. There are many rumors about this long-running franchise: Assassin’s Creed Infinity was heavily rumored before an official reveal. There’s the rumor of a remake of the first Assassin’s Creed, and there’s also a rumor that possibly this year, we might be getting a smaller-scale game called Assassin’s Creed Rift that’s centered on Assassin’s Creed Valhalla’s Basim (thanks, Bloomberg). The one rumor I’m most excited about and equally worried about is the Assassin’s Creed remake.

Remaking Altair’s adventure that kickstarted the entire series is a fine idea. It’s hard to play today on relatively modern consoles, and if someone is a newer fan of the series thanks to the RPG efforts of Origins, Odyssey, and Valhalla, maybe they’re itching to check out where it all began. However, if someone is to do just that, I believe they will be met with a not-so-great game to play in 2022. Assassin’s Creed was a significant first step, made even better with the quality of life improvements of Assassin’s Creed II. However, even that much-better game is tougher to play today as its age is certainly showing. That’s doubly the case with Assassin’s Creed. The combat is simplistic and not very engaging as a result. Visually, it could use a resolution boost at the very least, and the overall gameplay loop is quite monotonous.

It’s playable, but it’s not an ideal experience. That’s where the power of a remake can come in. And even more so, I think an Assassin’s Creed remake should follow the FF7R route. At a baseline, a remake would likely improve all of the surface problems I have with Assassin’s Creed today. Ubisoft could improve the gameplay, update the controls and visuals, and bring the game to platforms that are easy to access.

As a franchise, Assassin’s Creed has strayed a bit from its original vision, especially narratively, but I think an FF7R-style remake could provide some much-needed meta-commentary to the series. Much in the same way FF7R is a meta-discussion on the purpose of remakes and the importance, or sometimes lack thereof, of the voice of fans in remakes, I think Assassin’s Creed needs to do the same. The Assassin’s Creed of today is a far cry (heh) from what Altair’s first adventure was about, but not necessarily in a bad way. I just think connecting the dots between Altair’s journey and its importance to the latest Assassin adventure from Eivor is nigh impossible. Assassin’s Creed isn’t about the worldwide faceoff between Assassins and Templars anymore. And that’s okay. The series is nearly 15 years old – things change and evolve. I’m interested in that evolution and what Ubisoft can say about it with an Assassin’s Creed remake.

Let Altair’s actions speak to how not black and white things are in the Assassins vs. Templar conflict. Let him mention former proto-Assassins like Bayek, Kassandra, and Eivor. Let him warn of some Assassins turning on themselves if the order continues to stay rigid in its way. Let the combat feel more like the action RPG it is today, and bring the climbing in line with the series’ latest efforts, too – I’m a trained assassin dangit, let me climb anything and everything.

It’s a big ask, especially considering this rumored remake, if accurate, will almost undoubtedly be a standard by-the-books project – not every studio has a Tetsuya Nomura ready to chop up beloved canon. But imagine if it was more. Imagine if it drastically changed some fan-favorite events and moments to recontextualize big ideas about the franchise, like FF7R did for Final Fantasy 7, all while looking a lot better and playing better, too. It could provide new meaning to the Assassin’s order and its place in history, which is a story beat that’s been lost amidst the glitz and glimmer of the series’ newfound open-world RPG stardom. And it could reconnect entries that fans like myself have struggled to connect to the broader modern-day storyline that we’re still seeking answers to today.

Assassin’s Creed is one of the biggest franchises in all of gaming, and a remake like this can renew interest amongst jaded fans and bring in new players who don’t feel that there’s a good starting point in the series today. That’s the purpose of a good remake, after all, right? Hopefully, Ubisoft recognizes that.