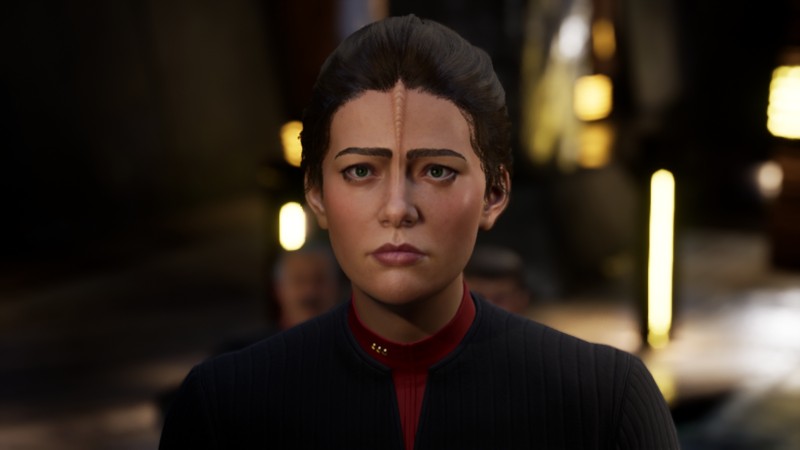 Star Trek: Resurgence lets players boldly guide an original crew where no man has gone before. By that, they get to determine the fate of a new team of space explorers and the stakes of an interspecies conflict in a choice-driven adventure. During Summer Game Fest Play Days, I got to navigate a particularly tense situation to get a taste of the sorts of decisions players will face and their potential consequences.

Resurgence’s original story unfolds in the year 2380, shortly after the events of Star Trek: The Next Generation, specifically its feature films. Players control two central members of the Resolute. First up is Petty Officer Carter Diaz, a young, action-hungry engineer who resides low on the totem pole in terms of ranking. Commander Jara Rydek is an exceptional half-Koblaid leader who recently came aboard the Resolute. The game comes from Dramatic Labs, a team of ex-Telltale Game employees. The team leverages its narrative adventure expertise in ways familiar to fans of Telltale’s episodic titles.

The bulk of the adventure, which is non-episodic, requires players to engage in choice-driven conversations with decisions that influence the story’s direction, including the character’s fates. Depending on your actions, people may live or die, though Dramatic Labs wouldn’t answer when we asked if every main character was fair game. Given that Star Trek shines best when stories focus on navigating the webs of diplomacy and relationships over brute force, designing a game that relies on the power of words feels like a perfect fit. 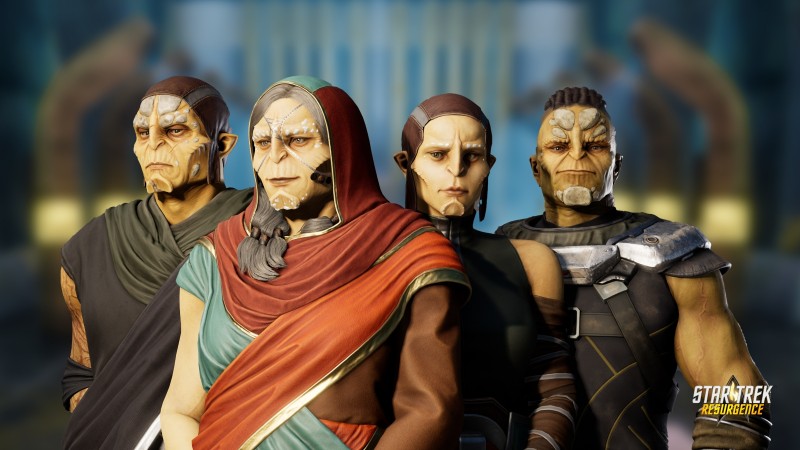 In my demo, we saw an example of the stakes at play, which put me in Jara’s boots. She attends a trade negotiation between two alien races on the brink of war. Thankfully, she’s not alone. Accompanying her is Captain Zachary Solano, an ambitious veteran officer, and Ambassador Spock – yes, that Spock. Although Star Trek: Resurgence predominantly features a new cast, expect to see a few familiar faces sprinkled in.

We meet with the Hotari, a rough and tumble race who reside on a moon dense in dilithium, a precious resource. Despite sitting on a figurative gold mine, the Hotari has never been able to fully reap the benefits. That’s because mining dilithium requires technology owned by the Alydians, a strict militaristic civilization that has traded in the mineral for decades and hopes to continue this arrangement. The Hotari have served as the Alydian’s labor force but now seek independence. That would threaten the Alydian’s access to dilithium and, in turn, its galactic strength.

Jade and Co.’s presence can soothe or agitate the situation depending on your choices. In meeting the Hotari Queen, I chose to display strength instead of shrinking in fealty, which may have helped position the Federation as a player rather than a pawn. I say “may” because Resurgence doesn’t indicate important decisions with a “They will remember this” style prompt, so you won’t always know how significant your actions can be. You’re better off assuming that everything you say and do can result in significant consequences, good or bad. 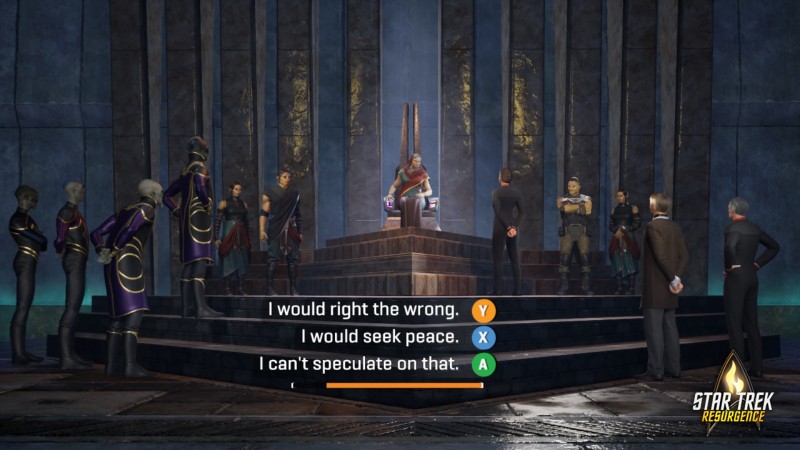 The Queen grills Jara, probing her with questions such as my feelings on the Kobloid’s less-than-stellar history with the Alydian’s and how I’d address that. While I tried to be as neutral as possible – as far as I was concerned, we’re attending to tackle our own problems, not to take on someone else’s – being put on the spot gets trickier when diplomatic answers disappear, and you must make a hard choice on who to side with. In Jara’s case, I had to declare which race the Federation should support in this trade dispute. This scene’s tension felt effective thanks to the solid performances on display. Spock’s new voice actor, in particular, seemed like a respectable replacement for the late Leonard Nimoy.

I’ll have to wait to see how Jara’s choices impact Star Trek: Resurgence, but those who enjoy the license and Telltale’s brand of storytelling may have reason to keep the title on their radar. So far, the worst I can say is that the slice I played stuck a little too closely to Telltale’s well-worn template, but Dramatic Labs previously stated the game includes stealth, ship piloting, and, yes, phaser battles. Star Trek: Resurgence arrives on PlayStation 5, Xbox Series X/S, PlayStation 4, Xbox One, and PC later this year.