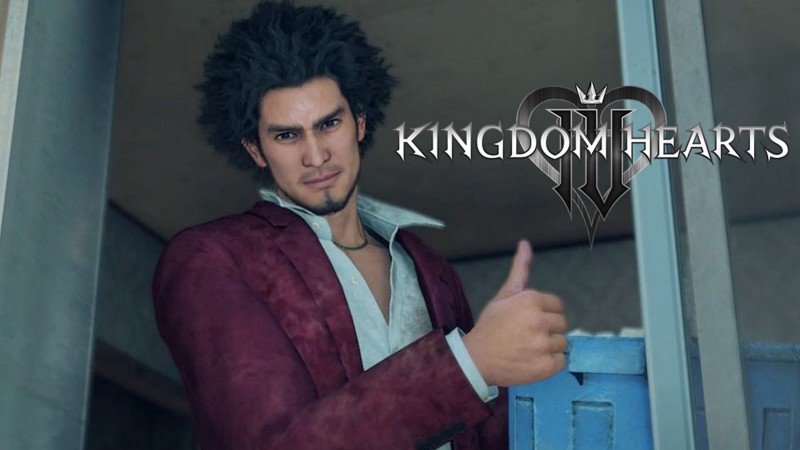 Working for a video game website, I engage in many playful, though sometimes heated, debates about games with my co-workers. We recently discussed the best Kingdom Hearts characters, and, surprisingly, several of us excluded Sora from the cream of the crop. However, a defender propped up Sora’s one defining good trait, his overwhelming positivity. In response, I jokingly said if optimism is all Sora offers, he should be replaced by a superior beacon of positivity: Ichiban Kasuga, star of Yakuza: Like a Dragon. We had a good laugh and moved on, but the idea lingered in my brain.

I’ll preface my next statement with this disclosure: I like Kingdom Hearts. Now that blowback immunity is activated, I think Sora is lame. He’s a good kid with a great heart, and he’s fun to use in Super Smash Bros. However, Kingdom Hearts III made me finally accept that I haven’t really been into Sora as a personality since (maybe) Kingdom Hearts II. Much of that probably has to do with his dialogue; it’s unbearably cringe-worthy at times. Not to mention he’s also got a bad case of Ash Ketchum syndrome; the dude is umpteen games deep, and he still isn’t an officially recognized keyblade master? More than anything else, though, I find Sora bland.

Let’s paint a hypothetical picture where Square Enix decided to retire Sora alongside his goofy clown shoes and decided to get wild. I can’t think of a better replacement than Yakuza: Like a Dragon’s Ichiban Kasuga. Why? In short, he’s pretty much Sora but cooler and vastly more endearing. Like Sora, he values his friendships, is fiercely loyal, possesses an inspiring can-do attitude, has a great moral compass, and is a complete dork. Plus, I’d love to see Ichiban interact with all of the Disney weirdos. But obviously, that can’t happen, so the next best thing is for Square Enix to look at Ichi to build a better Sora.

Ichiban is flawed. Despite being a total sweetheart, he willingly joins and associates with organized crime syndicates. However, that inner turmoil drew me to him because you knew that, under the smiling poofy-haired surface, the guy had some baggage that he needed help sorting through. Yakuza: Like a Dragon does a great job fleshing out his upbringing as an orphan to give context for his beliefs and relatively bright outlook on life. As a result, Ichiban’s optimism feels earned and inspiring rather than obligatory. Like a Dragon spends time developing its cheerful hero as much as it does the overarching plot, giving me someone I genuinely wanted to root for.

Sora has never felt as compelling. He grew up on the Nick Jr. version of the Lord of the Flies island, so he’s had it pretty good compared to Ichiban. That’s not to say that Sora needs tragedy to be interesting, but I want more from him. Square Enix has spent more time making Kingdom Hearts’ fiction as convoluted as possible but hasn’t given Sora’s characterization the same TLC. He’s had some growth, of course, but I still see the kid we met in 2002 – only taller and with repressed puberty in his voice. And in a series all about friendship, heartbreak, and loyalty, that’s become more glaring as I’ve gotten older. You can do “plucky happy dude” and still make him engaging rather than mildly grating.

I don’t want Sora to become some kind of edgelord either. Rikku already fills that quota as the “emotionally damaged good-then-bad-now-good again hero.” I just want Kingdom Hearts IV to explore who Sora is, what makes him tick, and develop him into a more complete person. I think Ichiban is a great template to study because the two wacky-haired heroes are so similar. If that’s out of the question for Square, then take my suggestion earlier and actually put Ichiban in the game instead. I’d love to see him get a drink with Donald and Goofy.