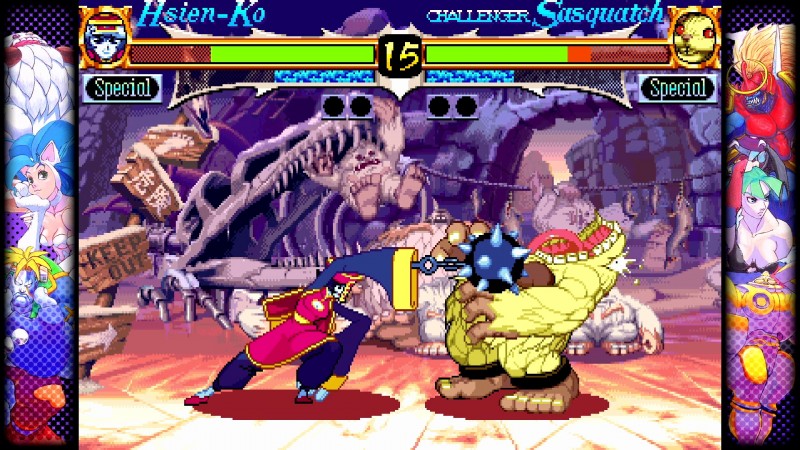 For the first time in a long time, Capcom is honoring its fighting game legacy that’s not just referencing Street Fighter and the occasional Marvel Vs. Capcom. With the upcoming Capcom Fighting Collection, 10 classic arcade titles are being re-released in one package bursting with special features that will get fighting game fans excited to relive the wild, quarter munching days at the local arcade in the comfort of your own home. The launch of this collection is less than a month away, and I’ve been granted early access by Capcom to take this bundle for a spin. After a few hours of playing matches of some old favorites as well as games that never made it stateside, I can’t wait for the collection to drop so I can spend my nights grinding out Darkstalkers matches online.

While the collection technically contains ten titles, that’s a bit of an undersell. Capcom Fighting Collection holds an impressive slate of games. First are the Street Fighter adjacent titles, Hyper Street Fighter II: The Anniversary Edition, Super Gem Fighter Minimix, and Super Puzzle Fighter II Turbo. Next are the highlights of the bundle: all five original Darkstalkers games, including two that only appeared in Japan. Those games are Darkstalkers: The Night Warriors, Night Warriors: Darkstalker’s Revenge, Vampire Savior: The Lord of Vampire, Vampire Hunter 2, and Vampire Savior 2. Finally, the two miscellaneous inclusions are Cyberbots and Red Earth, the latter of which never was never ported to console or PC in the past. Where the undersell comes in is that every game included, minus Vampire Hunter 2 and Vampire Savior 2, have their English and Japanese versions packed together, some of which have different version numbers, meaning those looking to specialize in a specific version may have some minutiae to work with in this collection. 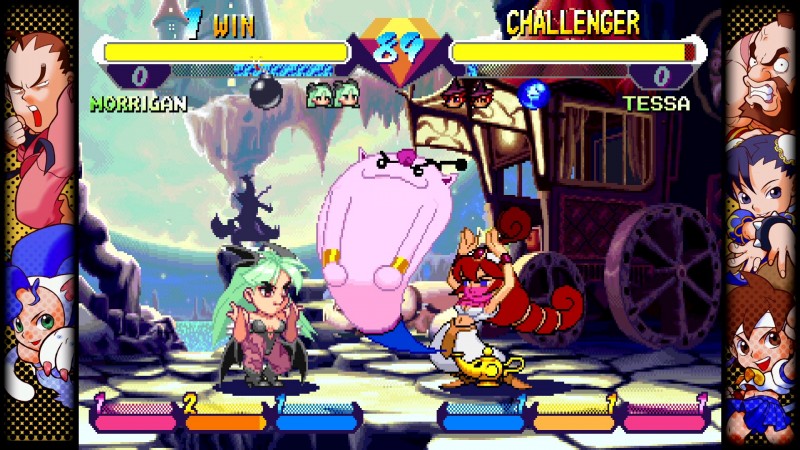 Because all of the games in Capcom Fighting Collection are pulled directly from arcade ROMS, normally that would mean the lack of modern conveniences like training modes, but Capcom went the extra mile and made Training Mode available for every game (except Puzzle Fighter) available from the game select menu with the press of a button. Training isn’t just a stale mode where you slap around a motionless CPU character but actually offers plenty of modern practice tools in just about every game. You can change the behavior of the opponent, record and play moves for them, and toggle various blocking and recovery states based on what’s possible in that game. Even Red Earth, which has an arcade mode that’s an RPG-lite boss rush instead of battling against the roster, has a training mode to practice against bosses and another version to hone your skills for versus play. It’s a very thoughtful implementation, even if it doesn’t have everything you may want, such as hit and hurtbox displays, but there’s plenty of info to gauge with the frame, input, and attack data that can be overlayed.

Joining Training Mode is online multiplayer for every single game and variation in the collection. Capcom has also stepped up to include rollback netcode for everything as well, and I’m thankful they did because I had a blast in my brief time testing it out. Because the collection isn’t live yet, I was only able to play a handful of matches with a colleague, but every match we played, one in every game, felt incredible. Not once did I notice any slowdown, laggy inputs, big gaps in animations or studders; it was buttery smooth gameplay for the hour or so we fought. The one minor gripe I had was having to recreate a lobby for each game instead of letting us swap games on the fly, but that’s an understandable technical limitation when dealing with more than two people grouping up for matches. Capcom Fighting Collection also allows you to play any game offline or browse the gallery while waiting for a ranked or casual match to populate, so you can brush up on combos in training mode or work through an arcade mode for whatever you want to pass the time.

Speaking of offline modes, there’s plenty of fun to have without an online connection. First, the training modes mentioned above are there to brush up on combos, or you could test yourself against the AI of each game’s arcade mode. Offline multiplayer is also available to challenge your friends and family in person for that real arcade experience. What kept me busy for quite a while was paging through the contents of the Museum, which is split into two modes, Gallery and Music. Music lets you choose a game and listen to any song on the soundtrack then and there. Gallery, on the other hand, is full of wonderful production art and more that’s been lovingly preserved and scanned in at high resolution to zoom in on all of the little details. I love looking at the sketches of key art and design documents detailing how characters are supposed to look and move. Those into game preservation and ephemera will get a kick out of the deep cuts of design docs on display.

While my time has been relatively short with Capcom Fighting Collection, I’m stoked for more people to get their hands on it. Not only is Capcom finally resurfacing long-dormant series like Darkstalkers, Cyberbots, Gem Fighter, and Red Earth, but it’s doing so by providing solid arcade ROMs for each and adding the modern accouterments on top like top-notch online netcode tech, and screen filters if you prefer a CRT TV aesthetic. This collection will do doubt be a fun journey down memory lane for some, but it also has the opportunity to put great versions of these games in the hands of fighting game fans who want a good way to play these games in 2022 without the need to figure out how to use third-party solutions. I hope this is just the first step to bringing back more classic Capcom fighters, but for now, I’m happy this collection will exist for everyone in just a few weeks.