The aroma of seasoned meat makes stomachs rumble, and you soon find your restaurant filled with hungry patrons. They dig their teeth into succulent entrees, wondering why they’ve never tasted anything like this before. Word of your establishment’s exotic tastes spread quickly, and you soon have to expand your operations with more tables for guests and better meat-chopping capabilities. This thriving eatery is strangely attached to an adorable little tailor shop that doubles as your meat supplier. Anyone going in for a fitting tastes a sharp blade, and their corpse is tossed into the basement, chopped up, and turned into a tasty steak or meat pie.

Ravenous Devils tells the story of a serial killer tailor and his loving chef wife who both want to get rich no matter the cost. This game is as disturbing and gory as it sounds – you see the brutal killings, the chopping of the bodies, and witness story moments that are downright chilling. Part Sweeney Todd and part cooking simulator, Ravenous Devils won me over with a tale that dangles the question of “will they get caught?” and intense timer-based gameplay that continually rewards you with new interactions and possibilities. Developer Bad Vices Games has created a dark and breezy experience that nails progression, so repeated gameplay interactions don’t feel like they overstay their welcome. 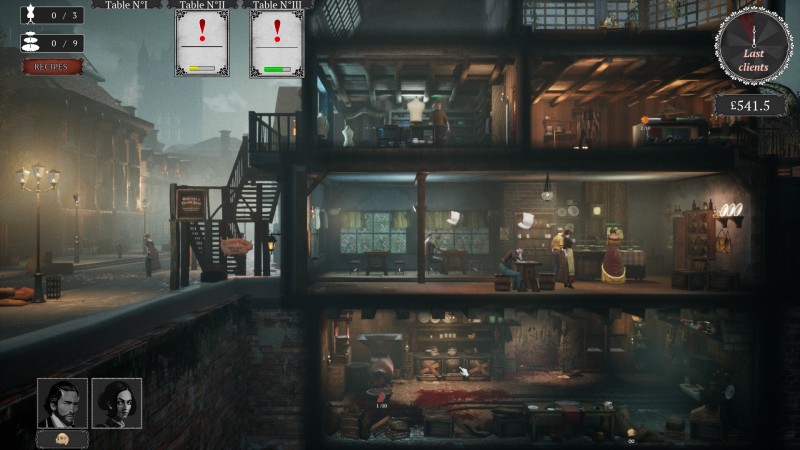 The macabre cooking flows nicely, unfolding like an old point-and-click adventure game, where all you do is tell the characters where to go and what to grab. The simplicity works, allowing Hildred, the chef, to grab a slab of human meat, mix it with other ingredients, and then place it in an oven. Percival, the tailor, can sew clothing, murder people with his scissors, and tend to a garden. With just the click of a button, you can freely switch control between these twisted souls.

The goal is to keep the clothing shop and restaurant’s shelves stocked with items. When people enter either establishment, a timer appears over their head and ticks down while waiting for the item they desire. The faster you supply them, the more money they give you in turn – an exchange that lights a fire in all of your movements, making you bounce quickly between the two jobs to make sure both Percival and Hildred are hard at work. Should you not get to them in time, and they leave disgruntled, you take a hit in reputation.

The flow of play is broken up into days, each lasting no more than 10 minutes. This short burst of hustling and bustling feels just right given the upbeat pace. None of the murderous duos’ tasks require much handholding and are all about timing. You don’t want any seconds in a day to be wasted. The goal is to maximize time and figure out how to bounce between tasks to take care of every guest. It’s a fun and chaotic dance of cooking and sewing.

At the end of the workday, you lock the shop’s doors and it’s time to spend your hard-earned money on handy upgrades. You can improve your meat grinder to deliver more meat, add more mannequins to sell clothing, and plant new vegetables in the greenhouse. You can also splurge on things like booze that calms the nerves of waiting shoppers, hire an assistant to serve tables, and even adopt a cat to catch mice (which you can turn into a treat for guests).

Most of the upgrades lead to more money coming in per sale and up the overall difficulty – a nice design touch that increases the tension simultaneously as the rewards. For instance, adding more ingredients creates a more expensive dish that takes more time to prepare. Adding tables for people to sit at makes a backlog of orders you have to scramble to serve – a fun process that makes time fly.

As simple as moving a cursor is, some frustration comes from its accuracy and the timing of being able to link to the next task. I would periodically run into moments where I would click on the meat I wanted to serve up and then the workstation to put it on. Rather than grabbing the meat, Hildred would go to the workstation and grab the plate instead. It’s only a 15-second mistake, but it’s enough to create chaos. 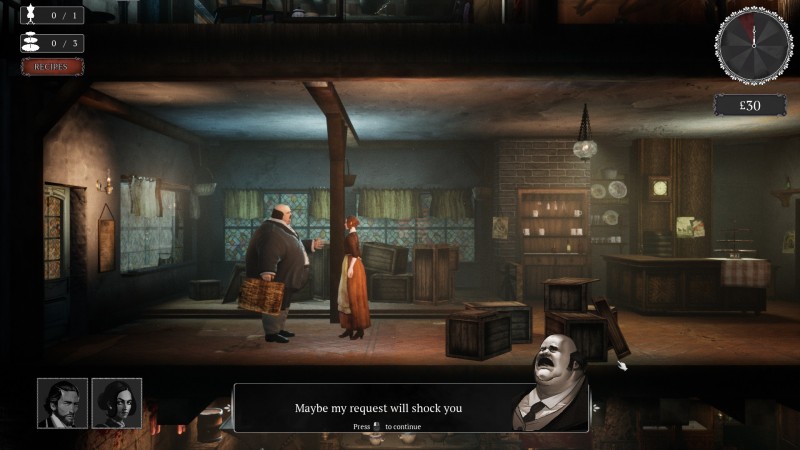 As all the cooking and sewing madness unfolds, you periodically receive letters from a mysterious someone named “J.” He knows what you are up to and is a massive fan of yours. His interest in you grows more disturbing with each document you read. The game’s ending leaves much to be desired, but the narrative journey building up to it was fun to follow and helped me stomach the twisted content, which impresses in how carefully plotted and fleshed out it is.

The gore may be too extreme and nauseating at times, but the decent animations, nice-looking restaurants, and compelling narrative kept me pushing through to the last cuts. Ravenous Devils is unlike anything out there, and it won’t be for everyone, but there’s no denying that it’s a nicely made and oddly enjoyable experience.