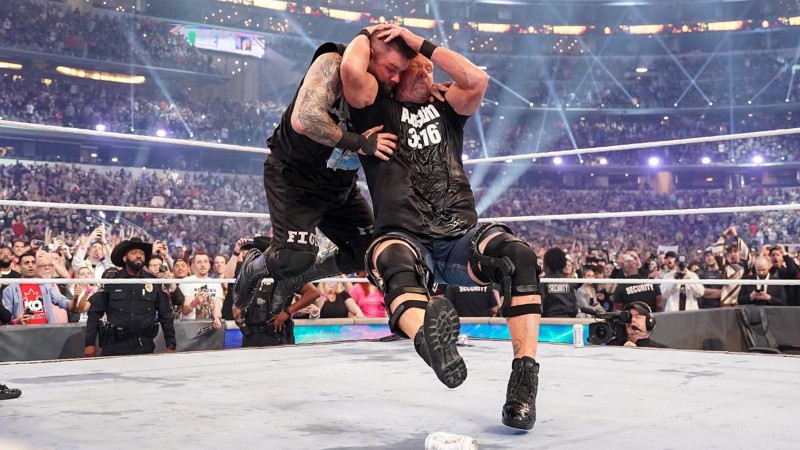 It’s always fun when our interests collide in fun and strange ways. One of my favorite things to watch almost any night of the week is pro wrestling. I’ve been a big fan of Stone Cold Steve Austin since he broke out as a mega-star in the 90’s, and since I  know him as a real outdoorsy kind of guy, I never thought he’d be keeping up with what’s popular in the world of gaming. In a promo for an upcoming episode of The Broken Skull Sessions, where Steve Austin interviews wrestlers and those around the industry, he shocked me and his most recent guest, WWE’s newest big acquisition, “The American Nightmare” Cody Rhodes.

30 seconds on the clock. Let’s see how many questions @CodyRhodes can answer!

And don’t forget to stream the latest episode of @steveaustinBSR‘s #BrokenSkullSessions with The American Nightmare this Friday exclusively on @peacockTV in the U.S. and @WWENetwork everywhere else! pic.twitter.com/MqyDi1Usfs

In a rapid-fire interview used as a commercial for The Broken Skull Sessions, Austin starts out by asking Rhodes which Zelda game is the best. The American Nightmare instantly and confidently replied, “Ocarina of Time. Hands down,” when out of nowhere, Austin shoots back by saying, “No dude, Breath of the Wild.” What?! He knows about Zelda. WHAT? He’s talking about Link. WHAT? The elf boy with the sword. WHAT? He fights against Ganon. Cody follows up by calling Breath of the Wild a “bold choice.”

Game Informer respectfully disagrees with both of them, though their choices are solidly in the top three. You can read our ranking of every Zelda game here.

Cody Rhodes, if you didn’t know, is a huge Zelda fan. He has a triforce tattooed on his ring finger, and you can usually spot that same Hyrulian relic on his wrestling gear. His return to WWE at this year’s Wrestlemania was even greeted with a quote straight from Ocarina of Time by WWE commentator Corey Graves. Like Cody, a lot of his generation of wrestlers are very much into video games. Fellow WWE Superstar Xavier Woods (AKA Austin Creed) has run a successful YouTube channel for WWE called UpUpDownDown and is currently a host on the recently revived G4 network. Other wrestlers like AEW’s Adam Cole, Evil Uno, and Kip Sabian as well as former WWE stars Cesaro and Tyler Breeze are all active Twitch streamers.

Stone Cold casually uttering the title of Nintendo’s iconic game is an astonishing moment I surely did not expect to see in 2022, but here we are. You can watch the video in the tweet embedded above. The full episode of The Broken Skull Sessions with Cody Rhodes will air on the WWE Network through Peacock this Friday.