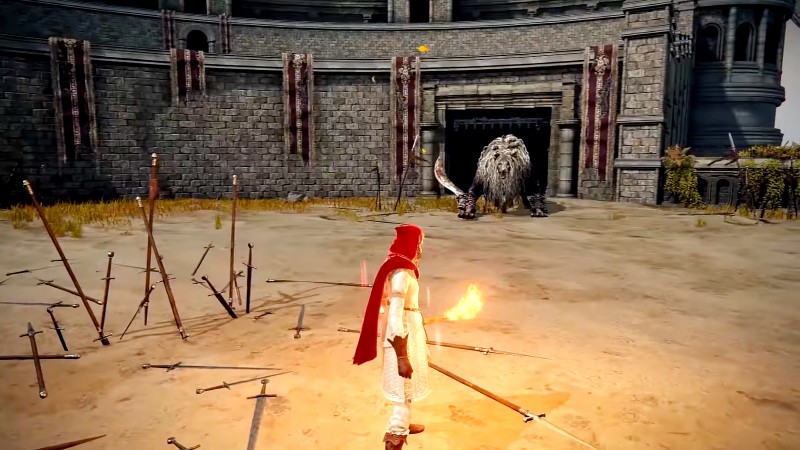 Players suspect that a closed colosseum in Elden Ring could be the location for a potential PvP-based DLC or expansion. Popular From Software modder Lance McDonald was able to look inside it with a mod. He confirmed that the colosseum’s outer walls aren’t just set dressing but actual walls to an arena.

As reported by Video Games Chronicle, another From Software modder, Sekiro Dubi, used a mod to enter the colosseum and explore it even further. Surprisingly, Sekiro Dubi discovered not just a colosseum to explore, but two additional Elden Ring enemies and even a new Site of Grace, which are Elden Ring’s version of Dark Souls’ bonfires.

As noted by VGC, the Site of Grace seems to indicate that this area was reachable within the game at one point or another, unless, of course, this Site of Grace will become reachable one day in a patch or DLC that allows players into the colosseum. Sekiro Dubi notes in their video above that the Site of Grace is called “?PlaceName?” (an obvious placeholder name) in the locations menu, but they point out that leaked Network Test files point to it being called Leyndell Colosseum.

As far as new enemies go, there’s a Gladiator Large and an Old Lion of the Arena, neither of which can be found elsewhere in Elden Ring. Sekiro Dubi notes that in-game lore indicates that this colosseum was a place where warriors fought against beasts.

For now, this colosseum remains inaccessible to the standard playerbase as it’s only reachable via mods. However, many speculate that it will become a PvP arena someday. Only time will tell.

In the meantime, read Game Informer’s Elden Ring review and then check out this story about how Elden Ring was the best-selling game in the U.S. for the second month in a row. Read about the latest Elden Ring patch that adjusts sorcery, incantation, and weapon skill balancing after that.

Do you want the colosseum to become a PvP-based arena? Let us know in the comments below!