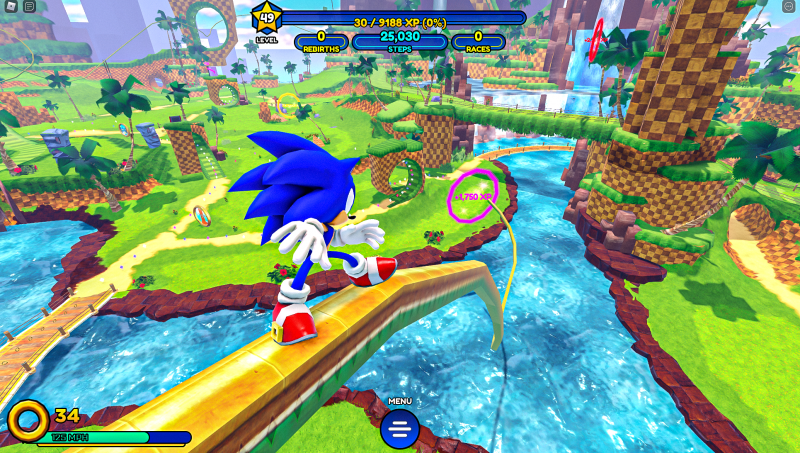 Prolific Roblox collaborators Gamefam Studios has partnered with Sega to bring Sonic the Hedgehog to the Roblox platform. It’s not just a big deal that Sonic is in Roblox, but according to a press release provided to Game Informer, this is the first time a “AAA character gaming character has been officially featured on Roblox.”

We have officially partnered with @SEGA to bring @Sonic_Hedgehog to Roblox in our upcoming game Sonic Speed Simulator!

We worked with various sonic developers from the #Roblox community in order to make this possible!#RobloxDev

You can sprint around as the Blue Blur and his friends in a game called Sonic Speed Simulator within Roblox right now. In it, players can level up and increase their speed while running through “multiple unique worlds” and racing against friends for rewards. Those rewards include stat increases, pets, and Sonic character skins to dress up in. Gamefam has weekly updates planned as well as an “exclusive community Sonic the Hedgehog skin” if the game hits 10,000 likes from Roblox players.

“We’ve worked closely with SEGA to create an official Sonic the Hedgehog experience on Roblox that will authentically delight the hundreds of millions of Blue Blur fans around the world,” says Gamefam CEO Joe Ferencz, in a quote shared with Game Informer. “We’re proud that SEGA entrusted our talented team of creators to bring Sonic to the metaverse and deliver the highest velocity, and probably best-looking, game in Roblox history!” Gamefam has also partnered with brands like Sony, Mattel, and Ubisoft on other projects.

The Sonic Speed Simulator page says the game is in a closed beta currently. If you’re interested in running a mile or two in Sonic’s shoes, you can check out this official collaboration here.

Source: Game Informer Sonic The Hedgehog Runs Amok In Roblox In A Partnership Between Sega And Gamefam