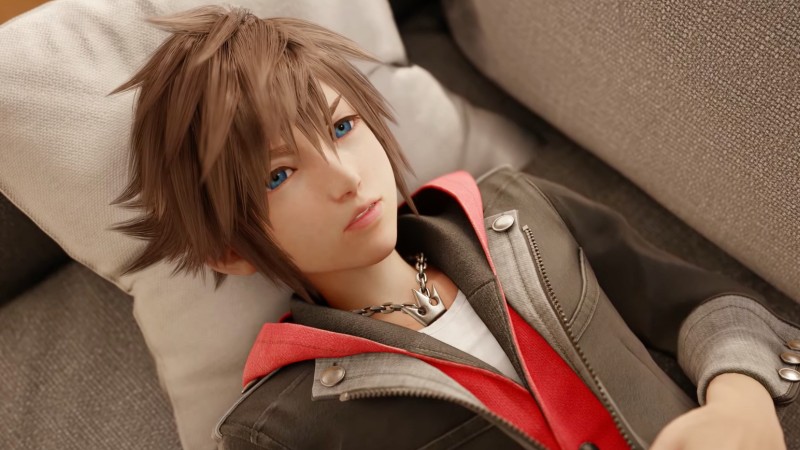 This was revealed during a 20th Anniversary announcement trailer released by Square Enix today and after roughly four minutes of information about current and upcoming Kingdom Hearts mobile games, the screen flashes to “The Lost Master Arc.” As you might guess based on the ending of Kingdom Hearts III, the lost master is presumably Sora, who lays asleep in the Tokyo-like world we last saw him in.

We get a glimpse at a very different visual style for Sora and Kingdom Hearts – easily the most realistic-looking, if you will, Kingdom Hearts yet, with a complete visual overhaul for Sora and the NPCs of this world. While flashing through some pretty environments, a narrator says the following:

“If this isn’t the ending you desired – if it brings you despair – then leave this world for another. Your options are endless. The heart resides within the soul, which is in turn guided by fate to its rightful place. The choice is yours once more. However, if you do leave this world behind, don’t expect to return to the one from which you came.”

It’s an ominous message, seemingly given to Sora by some of the Organization XIII members seen near the end of the trailer, and it makes it quite clear that we’re likely going to be fighting against Heartless in this new Tokyo-like world. It doesn’t hurt that a giant Heartless actually appears in the middle of the city to begin causing havoc.

Before that, though, a girl tells Sora that he’s been in this world for a week, sleeping. It doesn’t take long for Sora to recognize the Heartless threat in the city and as you’d expect, he heads right towards it, Keyblade in hand. Here, we see some new moves in Sora’s arsenal, like some light parkour abilities and a Keyblade chain that acts very much like a grappling hook. He scales his way up a building, and then down another falling through the air, before unleashing a devastating magic drill attack that defeats the Heartless.

While this trailer doesn’t directly touch on the final events of Kingdom Hearts III, which admittedly get very Final Fantasy Versus XIII by way of the in-game Verum Rex franchise, it’s clear this is the same world as those final sequences. If one thing is clear, if Kingdom Hearts III director Tetsuya Nomura is back to direct Kingdom Hearts IV, he seems to be diving deep into the Verum Rex side of the franchise to finally make what’s basically his Versus XIII.

As for when we’ll find out if that’s what this is, or if it’s something completely different, only time will tell because the trailer does not include a release window of any sort. Mainline Kingdom Hearts games usually take a while to develop, but Nomura has said in the past he does not anticipate that the team will take as long as it did to develop Kingdom Hearts III to develop a sequel to it.

If you’re worried that the Verum Rex side of Kingdom Hearts eliminates the potential for Disney characters and worlds, don’t sweat – after revealing the title, the trailer cuts to Donald and Goofy, who are looking for Sora, before they’re attacked. This little scene feels very much like a, ‘Hey, don’t worry – Disney is still going to be a part of this series in Kingdom Hearts IV.”

Are you excited for Kingdom Hearts IV? What do you want to see in it? Let us know in the comments below!