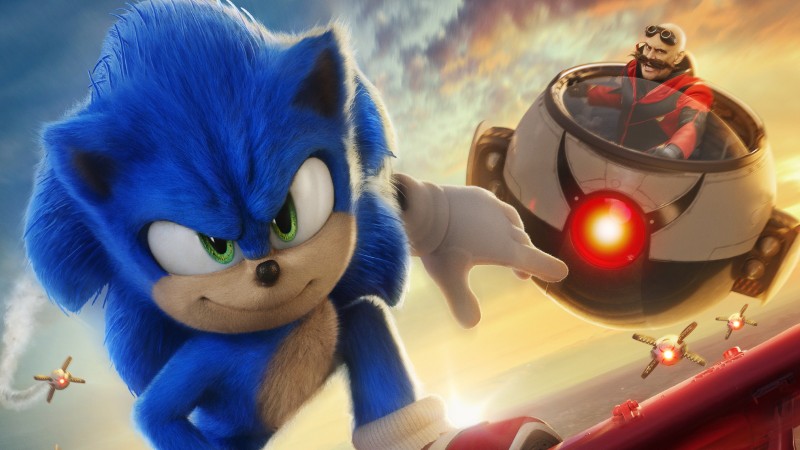 The first Sonic the Hedgehog film was an unlikely success story. Following a disastrous debut trailer, in which the iconic blue hedgehog looked far removed from his appearance in every other form of media, the studio went back to the drawing board. Instead of discouraging the filmmakers, the backlash motivated director Jeff Fowler and the rest of the team to pay more attention to the enthusiastic fan base.

“They were absolutely right to request us to work harder and to make adjustments,” Fowler says. “And then to come out the other side and for everyone to be able to high five and celebrate, it felt like we ended in a place where they were happy, and the film was a film that they could embrace. Now, moving forward, it just feels like we have this really wonderful relationship with the fans.”

The result was a character design that looked much more like the Sonic fans are familiar with, and the box office numbers reflected an appreciative audience, with the first film raking in more than $300 million worldwide. The authenticity Fowler and his team delivered in response to the fans paid off.

Part of that equation included actors who provided authentic performances for the brand’s biggest characters. Jim Carrey (Dumb and Dumber, The Mask) delivered an all-in performance as Dr. Robotnik. Ben Schwartz (Parks and Recreation, House of Lies) is a lifelong fan, so sliding into the role of voicing Sonic the Hedgehog was a dream come true. However, to find his performance as Sonic, he intentionally didn’t study any of the other interpretations of the character.

“When I read the script, to me, Sonic felt like this kid, this really energetic kid,” Schwartz says. “I didn’t really look at the other performances, so I took it from the movie script because I didn’t want to feel like I was copying anything. But in my head, I was like, ‘I want him to have heart, I want him to be excited, I want him to feel like a kid, and I want him to be funny. I want him to deflate any situation that feels too big for him with a joke, because he’s been through a lot of stuff, so that’s kind of how he’s lived his life.’”

In the first film, Sonic finds Tom, a human father-figure character played by James Marsden (Westworld, X-Men). While Marsden has a long history of prominent roles, acting alongside a virtual character has been a new experience for him.

“I’ve worked with actors where the animated hedgehog who’s not there is more animated than the person I’m acting opposite,” Marsden says, laughing. “It’s a different skillset. You’re on set and you’re sitting in a rowboat having a heart-to-heart with your son, and he’s not there; it’s just a voice from behind the camera somewhere. It definitely takes a little bit of your imagination.”

In Sonic the Hedgehog 2, moviegoers are introduced to silver-screen versions of Tails and Knuckles, voiced by Colleen O’Shaughnessey (Sonic Boom, Sonic Forces) and Idris Elba (The Wire, The Suicide Squad), respectively. Like Carrey, Elba provides A-List star power, but O’Shaughnessey grants additional authenticity, thanks to her long tenure voicing Tails in the games and recent TV series.

O’Shaughnessey thought her appearance as Tails in the first movie’s credits scene would be a one-and-done situation and never expected to join the main cast. “I had no idea where this would go; I had no idea how excited people would be to see it!” she says. “People sent me videos of their theaters exploding in joy! I knew people liked Tails, but I had no concept of how that reaction was going to go!”

Sonic the Hedgehog 2 recreates multiple iconic scenes from the games. The snowboard scene in the trailers is reminiscent of games like Sonic 3 and Sonic Adventure, but Fowler loves the climax of the second Sonic game. “Tails flying the Tornado, delivering Sonic into battle on the biplane … it’s such an iconic image from Sonic 2,” he says. “To be able to do the big-screen, cinematic version of that, it gave all of us goosebumps and got us so excited.”

Schwartz agrees that Sonic the Hedgehog 2 delivers plenty of fanservice and nods to iconic moments from the games, but he also has a list of other game moments he’d love to make the jump to live-action. “Oh my goodness, in Sonic 2, the casino zone is pretty amazing!” he excitedly says. “But there is this zone in Sonic Mania – though I guess it wouldn’t make sense because we’re a film – but in Sonic Mania there’s this incredible zone that’s all about movies and zapping you from a TV to a different TV. I was blown away by how amazing all that stuff was. I’m a big side-scroller guy because that’s what I came up with. Sonic 2 has so many things I’d love to put in there. Sonic Mania has a similar fun vibe.”

Sonic the Hedgehog 2 is in theaters now, but don’t think that once you see it that’s the end of the Sonic saga. A third film has already been greenlit by Paramount Pictures, as has a live-action show starring Knuckles for Paramount Plus. When you add a mid-credits scene for Sonic the Hedgehog 2 that sets the table for the next entry in an exciting manner, the future of the live-action Sonic franchise looks bright.

For more on Sonic the Hedgehog 2, check out our review of the movie, or see more of our interviews with those involved with the film in our videos here. For our recent ranking of all the mainline Sonic the Hedgehog games, head here.