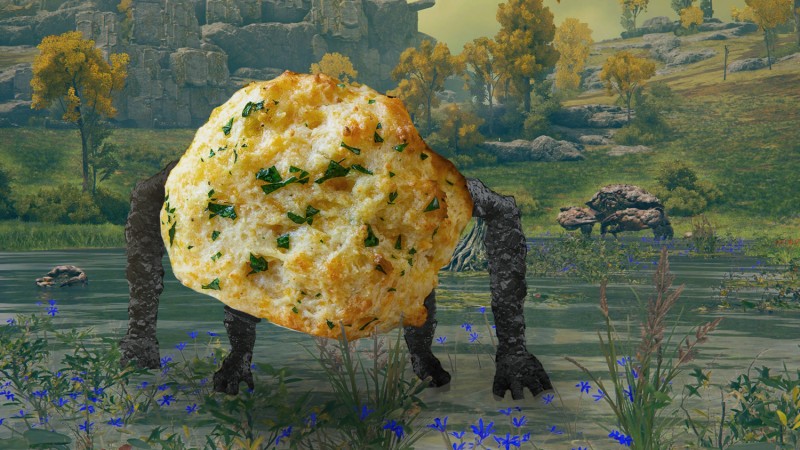 In an unexpected but mouth-watering development, From Software has partnered with Red Lobster to summon the restaurant’s single greatest asset to Elden Ring: delicious Cheddar Bay biscuits.

Coming in patch version 1.05, players exploring Liurnia of the Lakes will soon find oversized bipedal biscuit monsters roaming alongside the giant lobsters already terrorizing the area. These lip-smacking foes attack by pulling off pieces of themselves to lob at the player. When hit, your character is inflicted with the “hungry” status ailment, making them halt to obsessively devour the giant crumb. This leaves them vulnerable to attack by the bone-crushing lobsters, making them a deliciously deadly duo.

In a press release, Red Lobster describes these savory troublemakers as “buttery, house-made horrors that are ready to feast on your runes! Speaking of feasting, Lobsterfest is back at Red Lobster! Get your revenge on those mean (but tasty) crustaceans by indulging in our Lobster Lover’s Dream® and our new Lobster-Topped Stuffed Flounder! Stay Tarnished, not Famished!”

Slaying these tasty terrors drops the limited-time “greasy butter finger” consumable multiplayer item. Using this item summons a dozen cheddar biscuits into your friend’s sessions because, according to Red Lobster, “everyone loves the friend who requests more biscuits for the table.”  You’ll also be rewarded with the special “lean back and loosen belt” gesture.

To return the marketing favor, Red Lobster plans to promote the game with a new menu item:  the Elden Lord’s Feast. This limited-time dish consists of fried calamari rings, a side of “rice of lost grace,” and an abnormally aggressive live lobster that guests must kill at the table.