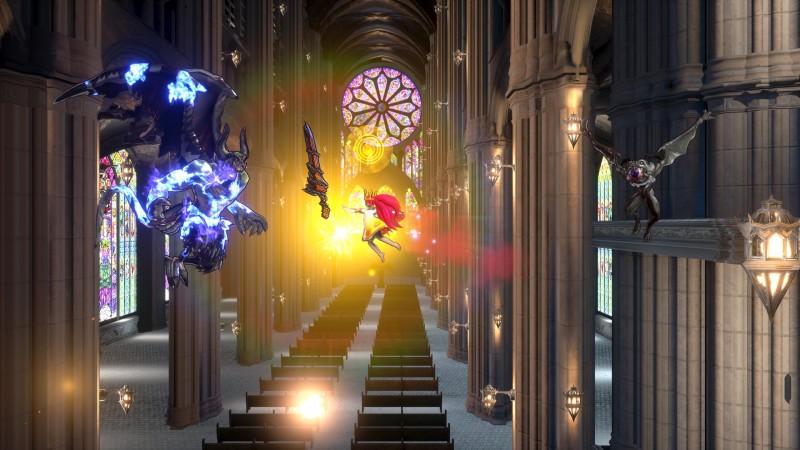 Update 3/31/22:  Aurora is available today! To mark the occasion, a gameplay trailer has been unveiled showing off how this guest character handles herself in the world of Bloodstained. Check out the new footage below and read on to learn about this free DLC.

Original Story 3/30/22: Aurora, the tenacious main character from Ubisoft’s Child of Light, will be available as a playable character in Bloodstained: Ritual of the Night starting on March 31 for select platforms. Her inclusion was originally teased back in 2019 along with Yacht Club Games’ Shovel Knight.

Bloodstain’s publisher 505 Games released a brief trailer that teases Aurora’s impending inclusion, but more information can be found in a new blog post on the game’s website. There, a smidge of context is given to why she has arrived in a new franchise.

“Aurora has lost her way and awoken in a strange, dangerous new land. Armed with the Sword of Matildis and accompanied by the loyal Igniculus, she must find a way to escape. Despite the dire situation, Aurora is not alone. Johannes is on hand to help her increase her power by transmuting items found in chests throughout the game,” says 505 Games community manager Jason Ryan.

Aurora will be available for free and can be selected as the playable character when starting a new Bloodstained campaign. She’ll be listed alongside the game’s native characters, Miriam and Zangetsu.

This DLC won’t be appearing on every version of Bloodstained quite yet. Tomorrow marks Aurora’s arrival on PlayStation, Xbox, and PC, but Switch owners will have to wait for an unspecified later date.

Child of Light is a 2014 turn-based RPG developed by Ubisoft Montreal that stars Aurora, a princess who finds herself in another world and fights for a way back home with the help of her firefly partner Igniculus who also appears in the Bloodstained DLC. Bloodstained: Ritual of the Night is the spiritual successor to Koji Igarashi’s games in the style of Castlevania: Symphony of the Night, which released in 2019 following a successful Kickstarter campaign in 2015. You can read our review of it right here.