Bridgerton is returning for its second season after becoming an instant success for Netflix during the holiday season of 2020. The lavishly detailed adaptation of Julia Quinn’s romance novels instantly enraptured audiences with its story of love, betrayal, and seduction in Regency-era England.

After its premiere on Christmas Day, Bridgerton soared to the top of Netflix's charts and introduced a whole new audience to historical romance. The new season continues to follow the Bridgerton cast, but the focus this time around is on the eldest son Anthony. Taking the second book in Quinn's saga, The Viscount Who Loved Me, as its main inspiration, Bridgerton season two is a slower burn but no less gripping for it, with faces new and old for audiences to become acquainted with. The hit series made our Biggest New Shows (and Seasons) Coming in 2022 list, too!

Here is our guide to the main characters of Season 2 of Bridgerton. 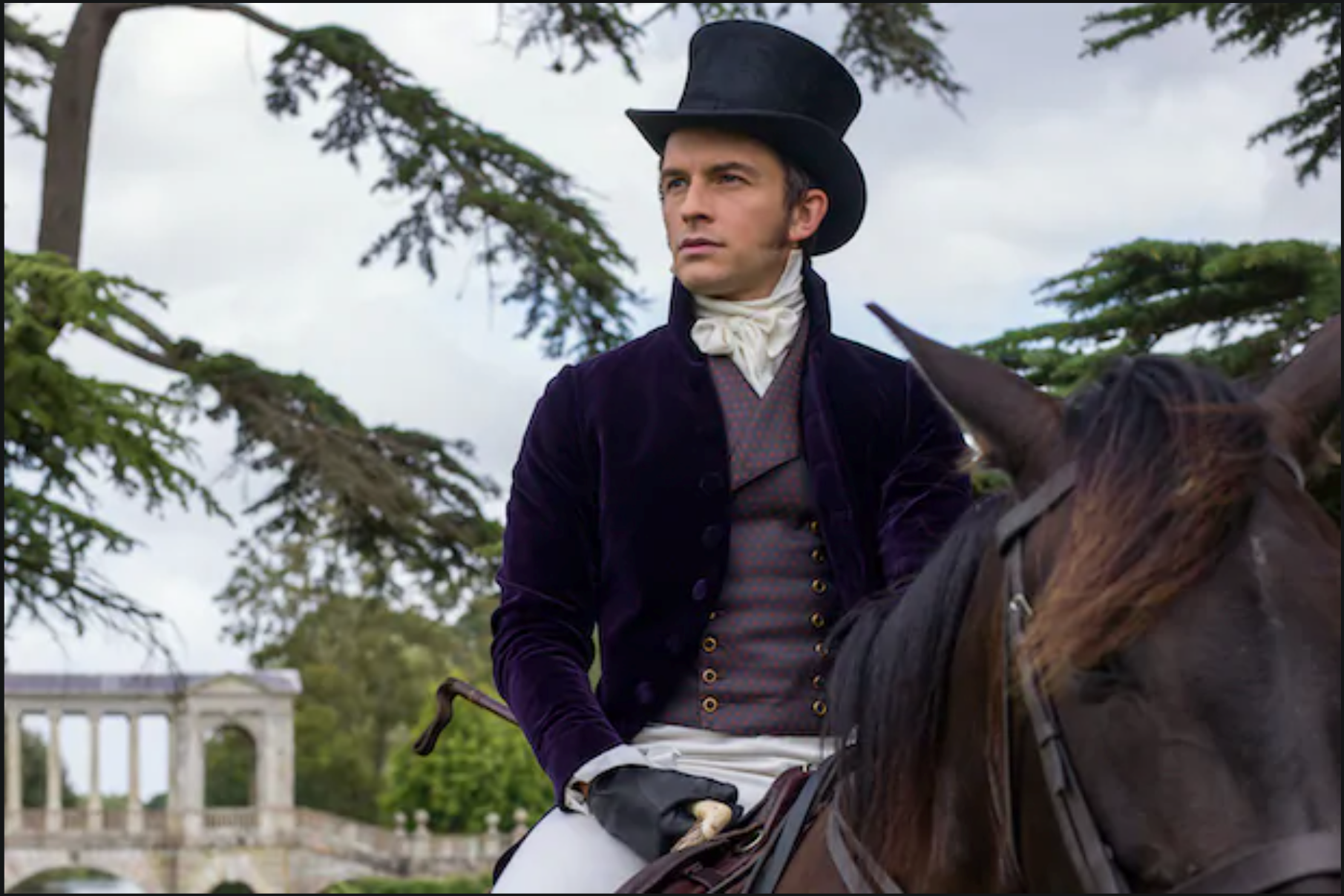 The eldest of the eight Bridgerton siblings, Anthony is the head of the family following the tragic passing of his father. Season one saw the young viscount trying to navigate his familial duties alongside his personal desires, as he attempted to guide his sister Daphne in her marriage prospects while conducting an affair with the opera singer Siena. After putting off finding a wife for so long, the end of season one saw Anthony finally decide to marry. In season two, he plans to find the ideal partner without love complicating matters but the arrival of the Sharma family shakes up his carefully laid plans. As the heat builds between him and Kate, Anthony still struggles to deal with the weight of his responsibilities and the grief he's never dealt with. 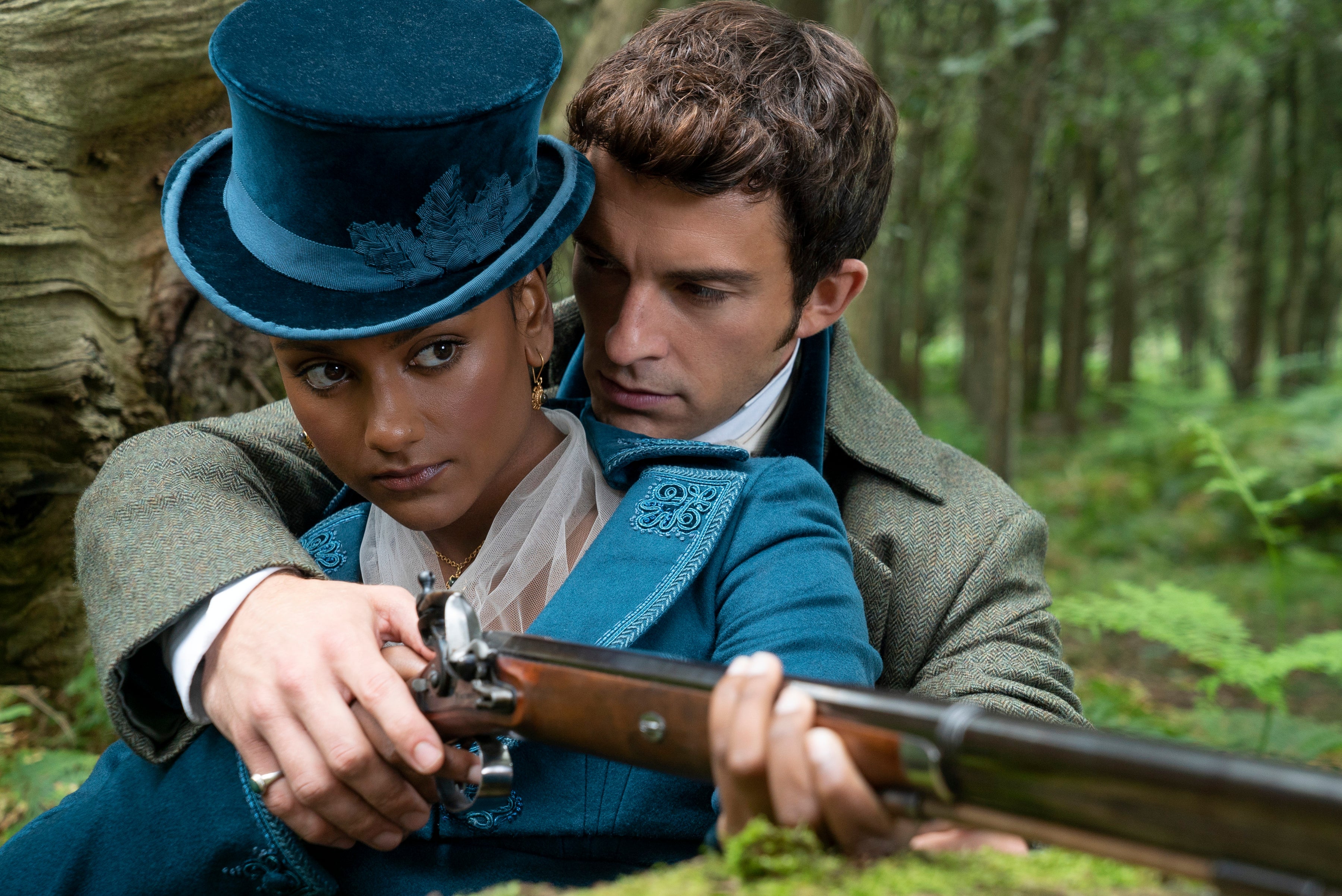 For fans of Quinn’s novels, Kate Sharma is often considered one of the most beloved characters in the entire saga and it’s not hard to see why. A new arrival on the London social scene from India alongside her sister and mother, Kate is a headstrong woman who puts her family above all else. She has little time for the machinations of the ton and the endless swirl of marriage talk. Her priority, rather than securing her own husband, is to ensure that her sister Edwina finds a suitable love match. Anthony is drawn to both Sharma women but when Kate discovers that the Viscount has no interest in love, she becomes determined to stop him from growing closer to Edwina. What she didn't account for were her own feelings and the undeniable connection between her and Anthony. 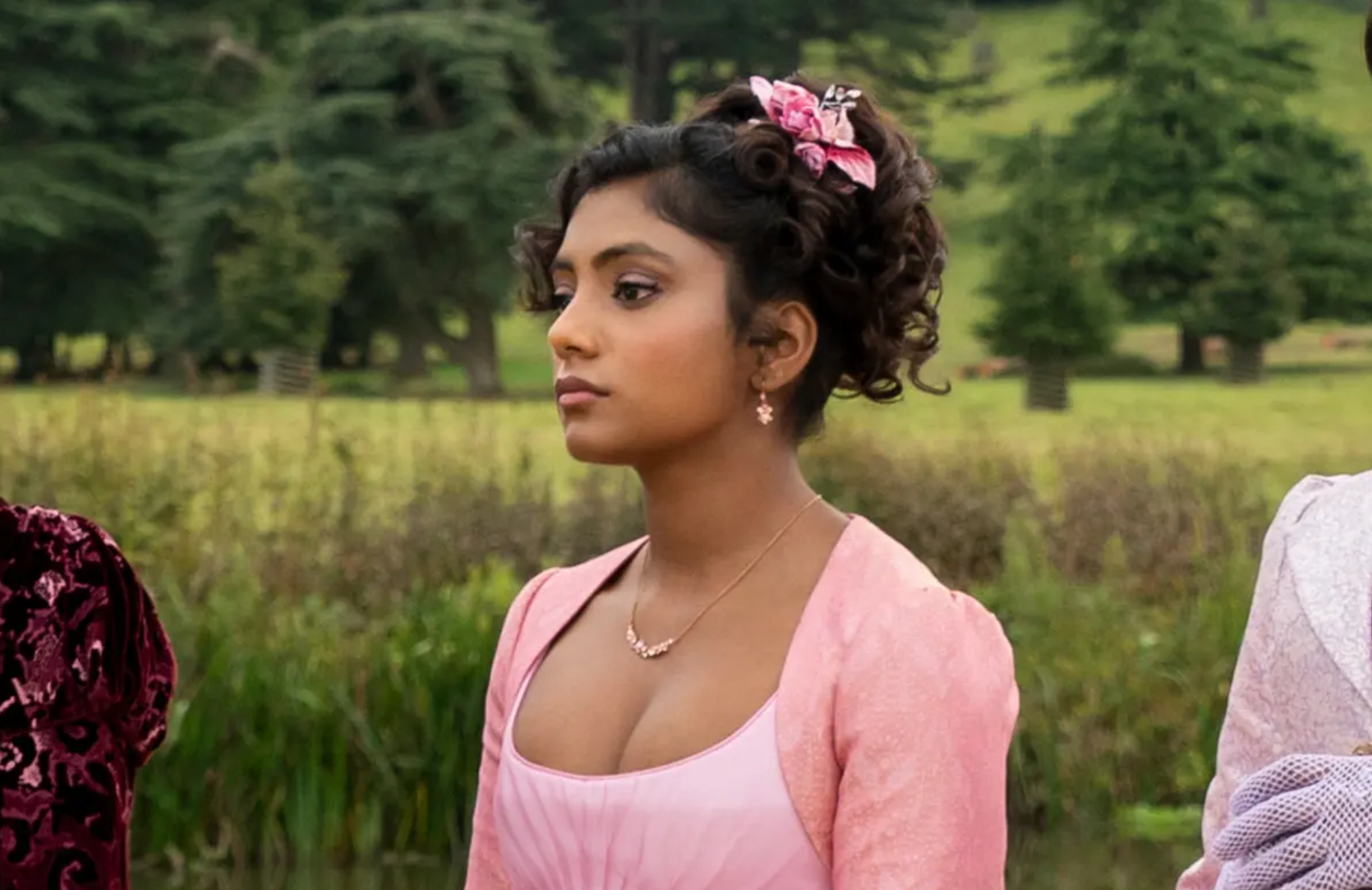 Of the Sharma sisters, it is Edwina who is seen as the most eligible prospect for marriage, and Kate is keen to make sure that her younger sibling finds someone who is worthy of her. She is a touch naive about what to expect from the surprisingly cutthroat world of the marriage market, but she also firmly believes in her quest to find true love. With Kate by her side, she may find the ideal husband. Just not Anthony Bridgerton. 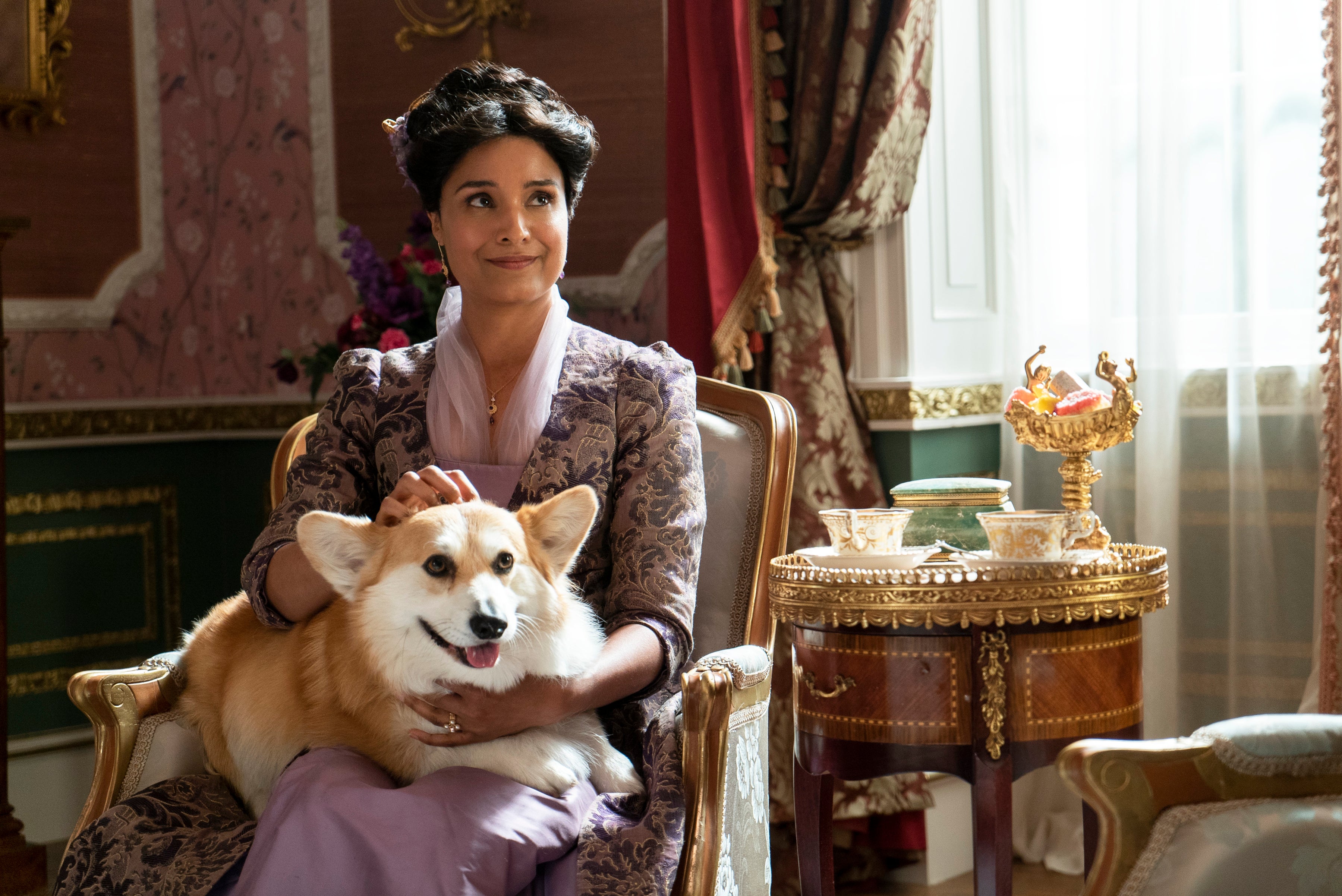 Lady Mary Sharma returns to London for the first time since leaving England amid a major scandal. Her well-to-do family were disgraced when Mary fell in love and married a widow of no aristocratic standing from India who already had a daughter — young Kate — from his previous marriage. They eloped to Bombay and stayed there until Mary decided it was time for Edwina's debut season. Not only is she testing the waters for her own return to English society but she's ready to finally stand up for herself after decades of being sneered at by her so-called peers. Expect lots of scenes with her trusty corgi Newton. 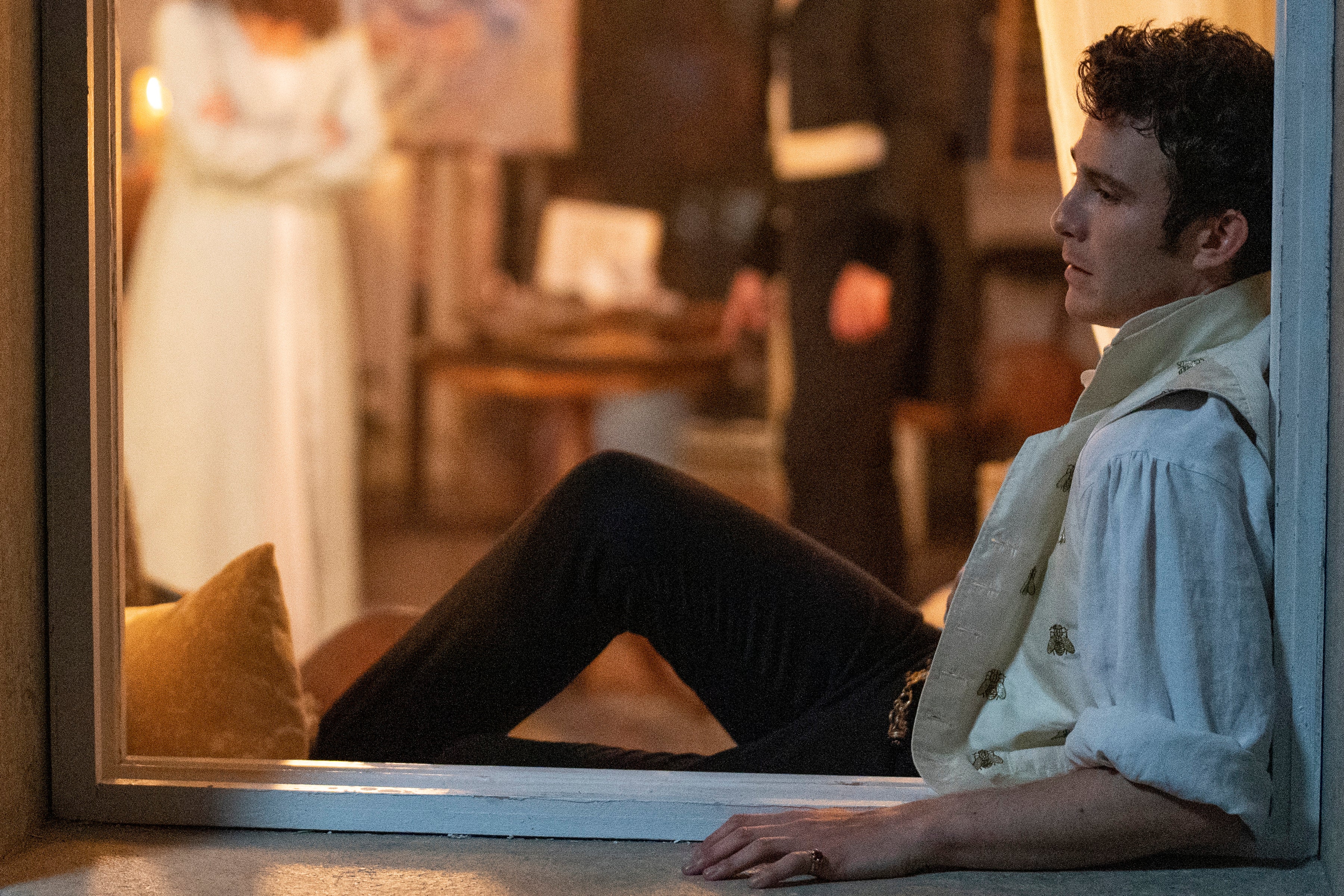 Bridgerton sibling number three, Benedict had less pressure on his shoulders than Anthony and Daphne in the first season. Yet he knows that he also has responsibilities he can’t shirk. We saw him during most of season one exploring his creative talents and befriending the artist Sir Henry Granville, who invited him to parties where he could be free to unleash his desires. 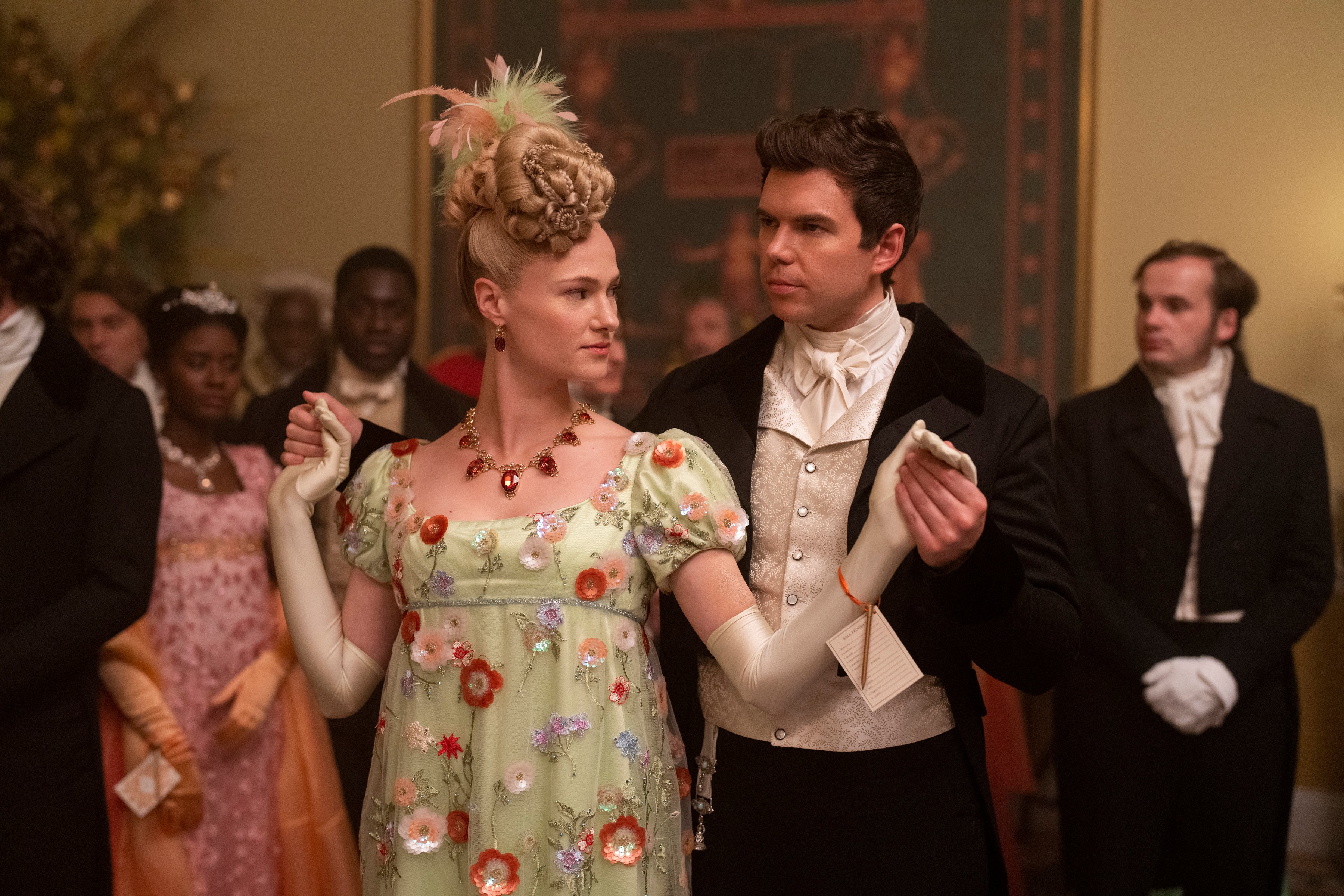 The third eldest brother Colin experienced a whirlwind of emotions and betrayal in the first season. He fell hard for Marina Thompson, a cousin of the Featherington family, and quickly became engaged to her. He broke things off when it was revealed that Marina was pregnant out of wedlock with another man’s child and wanted Colin’s protection via marriage. In his heartbreak, Colin announces his intentions to leave London and begin travelling Europe. Season two will see him return to London society with no plans for courtship, much to the disappointment of his friend Penelope.

While Daphne, the eldest daughter. was eager to find a husband and establish good marriage prospects for her younger siblings, Eloise was long disdainful of the wedding cycle. Far more sardonic than Daphne, Eloise frequently lamented that marriage was the only option available to women like her. She would rather be pursuing her own path in life, but by season two, she's now on the marriage mart and is trying to get through the season without getting too invested in the nonsense. She finds solace with a group of very unconventional women fighting for liberation from the marriage cycle. The second season also sees her continuing her quest to uncover the identity of the all-knowing gossip columnist Lady Whistledown. Little does she know that the truth is close to home. 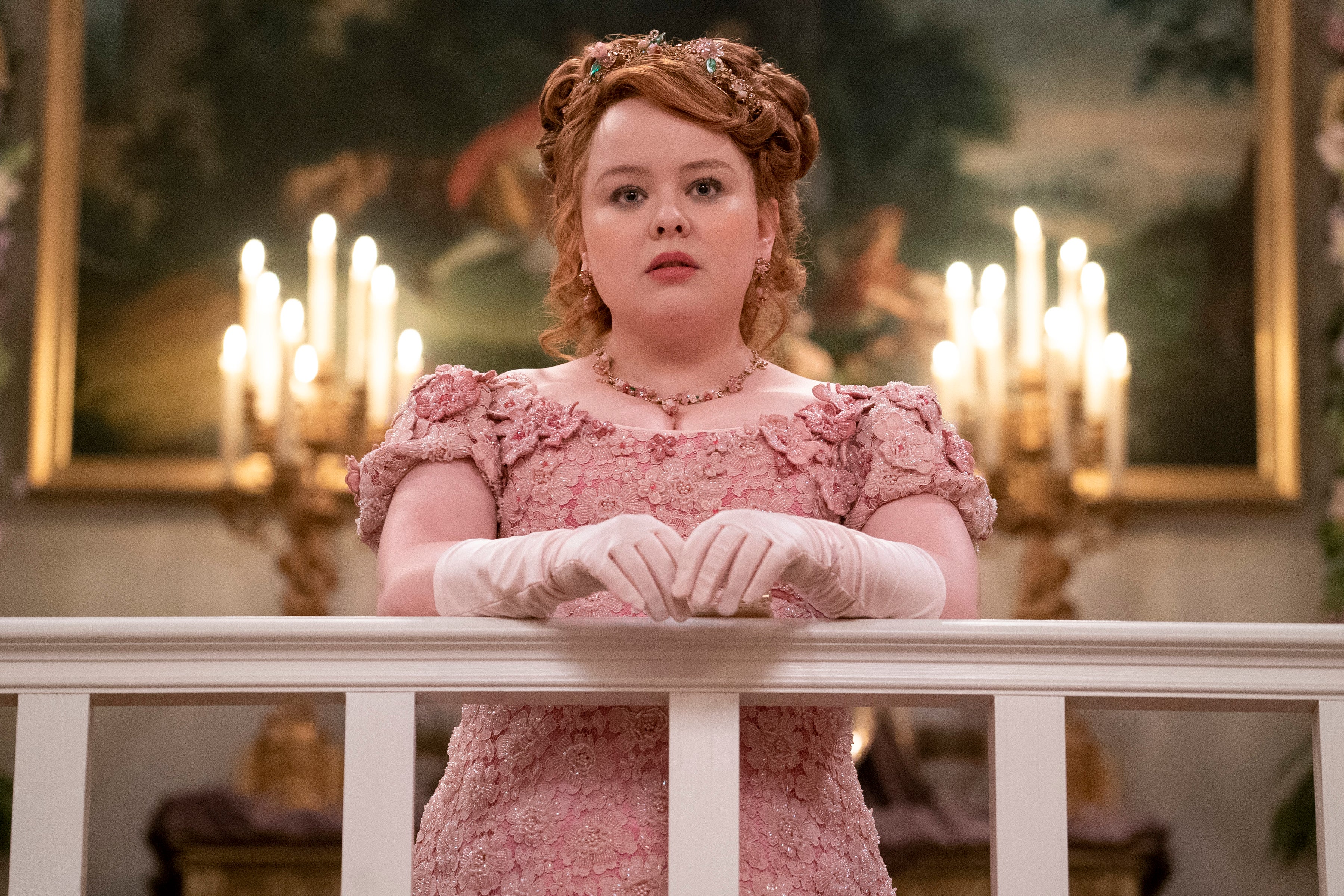 Eloise’s best friend Penelope is seen as the black sheep of her family, the dowdy sister who nobody believes will ever find a husband. She’s long been in love with Colin Bridgerton, with whom she maintained a correspondence during his travels across Europe, but he views her as a friend and nothing more. Season two sees her on the marriage mart but troubled by a number of problems: she's grieving the death of her father, her feelings for Colin continue to complicate her life, and she's still maintaining her secret life as Lady Whistledown, a detail that was revealed in the first season finale.

Daphne Bridgerton, The Duchess of Hastings 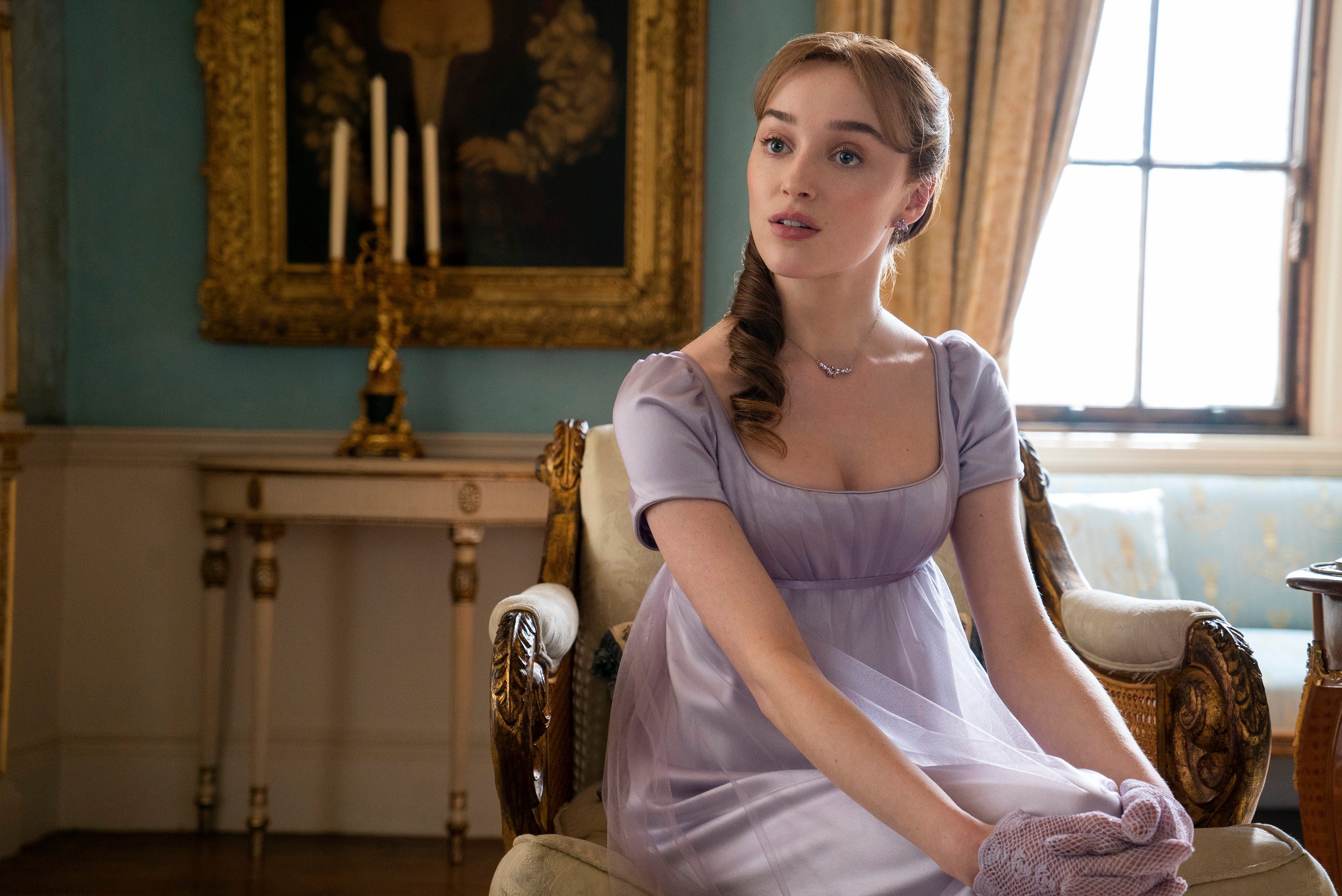 Season one was Daphne’s story, and her long, messy road to love concluded with her marrying Simon, the ever-so-eligible Duke of Hastings, and giving birth to his son. With her happy-ever-after sorted, the new Duchess of Hastings is firmly in a supporting role this season, offering guidance to her siblings as they try to follow in her footsteps (Simon is notably absent after Regé-Jean Page declined to return to the show for a new season.) 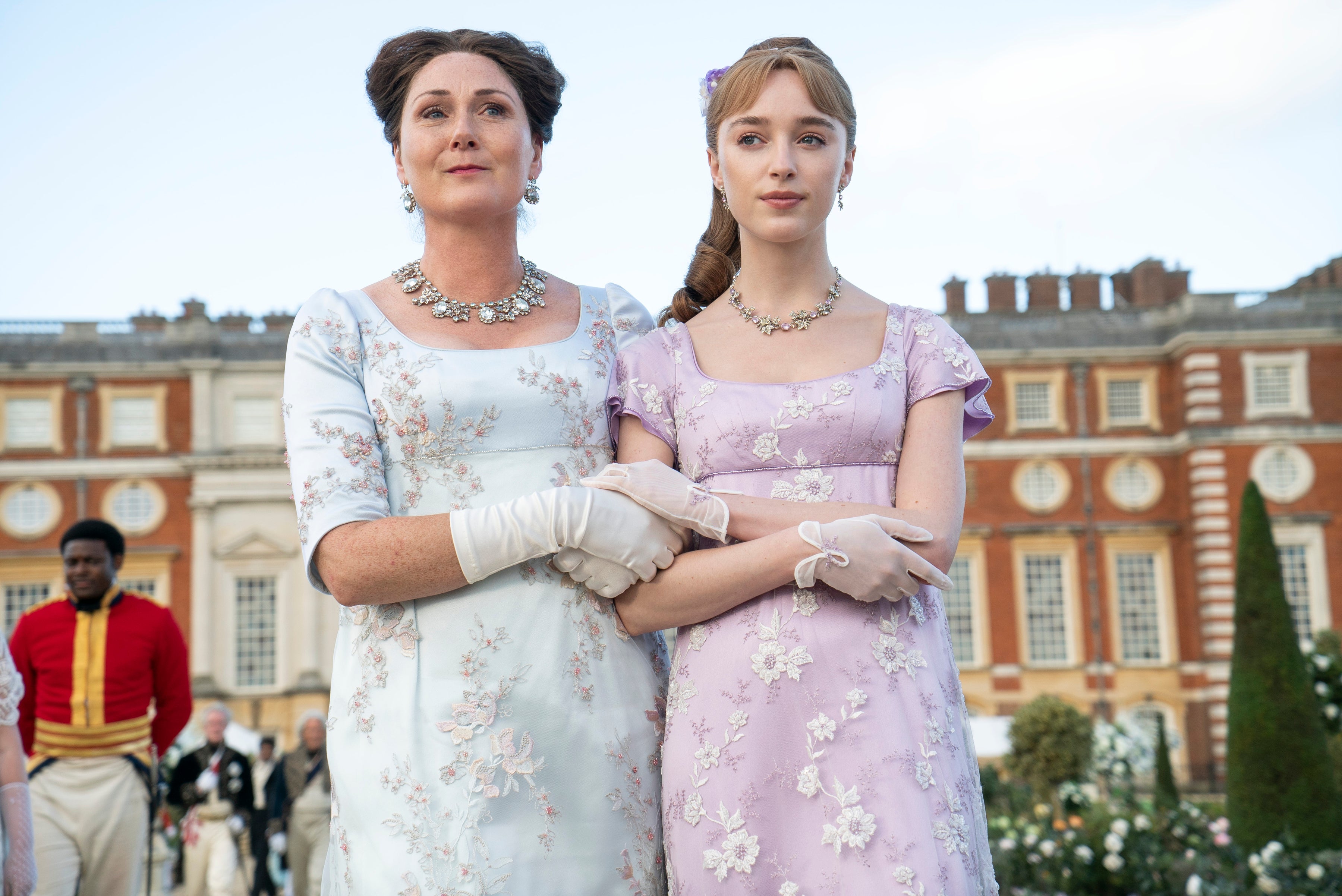 The matriarch of the Bridgerton clan, Violet is a widow following the passing of her husband Edmund, who died from an allergic reaction to a bee sting. To her family, she is a guiding light and source of love, as well as an ideal to live up to, having found her true love, something many of them aspire to. She’s eager to ensure the best marriage prospects for her eight children but also wants them to aim for love, which is far more important than any social standing. 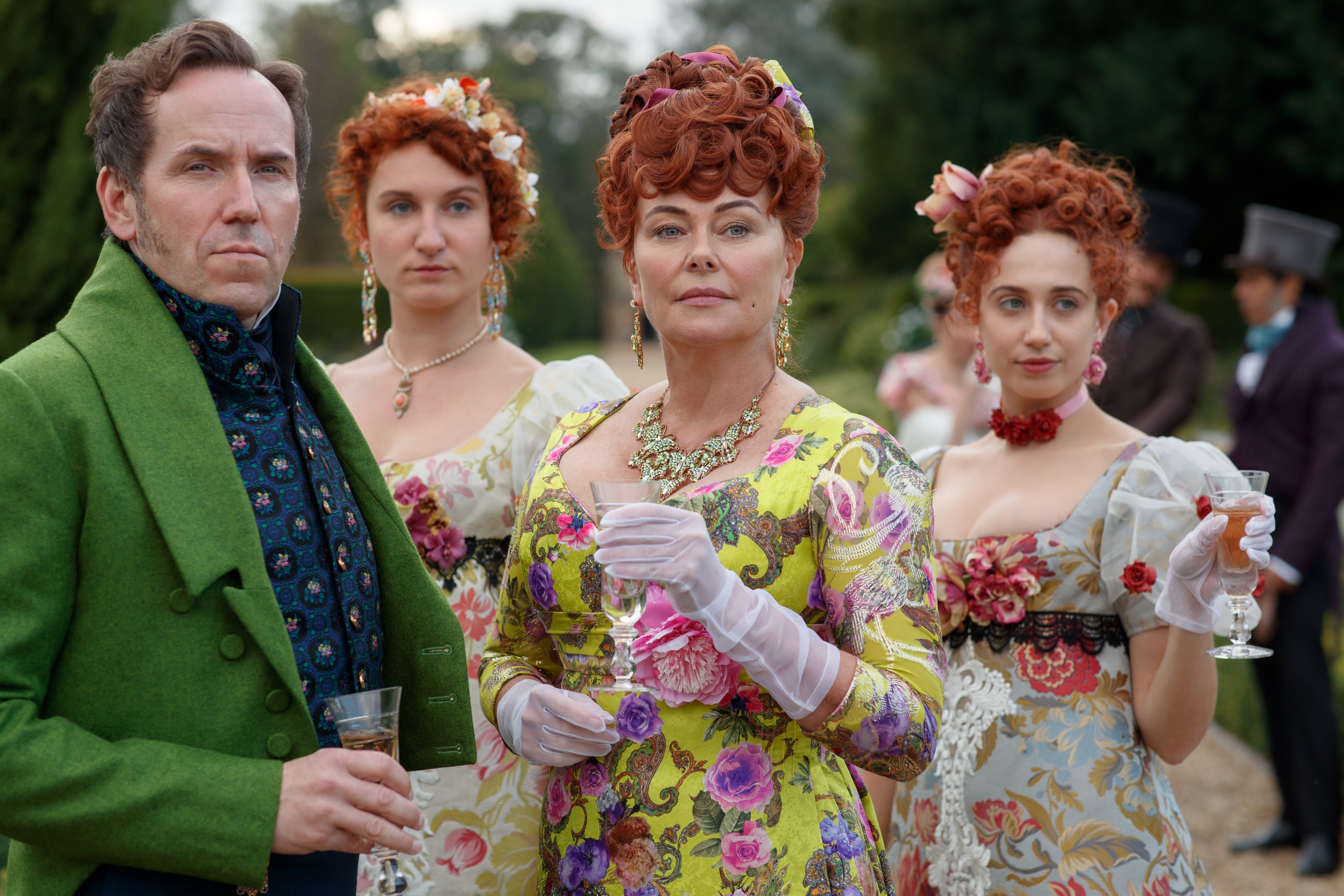 Penelope’s mother is a fiercely ambitious player of the ton’s game and wants nothing more than for her three daughters to find strong, wealthy, and independent husbands. During season one, she had to contend with the arrival of Marina and her unexpected pregnancy, which she feared would destroy her own children's husband options. Matters were further complicated by her husband's money troubles and his death. Now, she is no longer the head of the family, has no money, and no control over her own life since the estate can only be passed down to another man. The second season sees her contend with the new Lord of the Featherington estate. 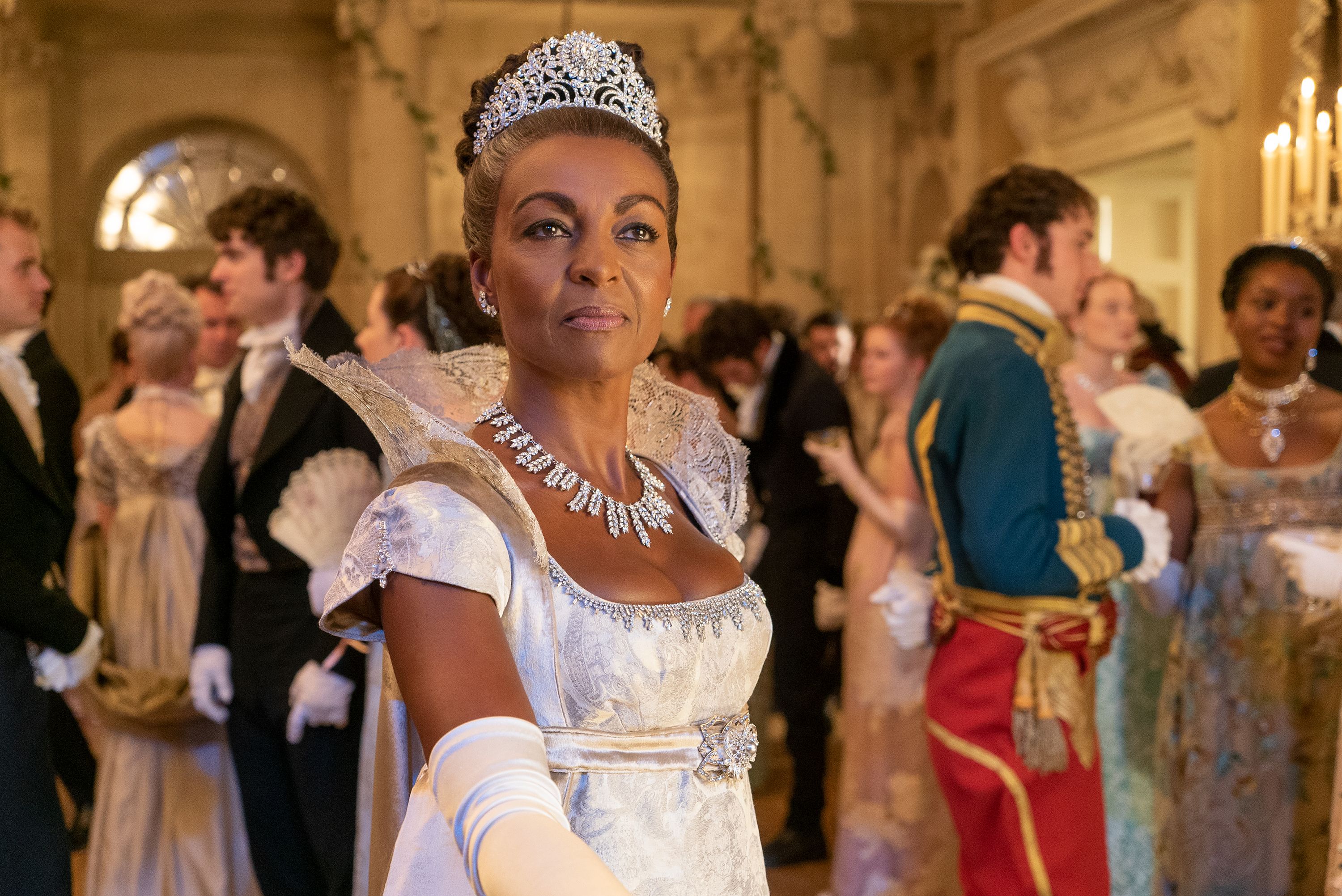 One of the true legends of the London social scene with a reputation for throwing impeccable parties, Lady Danbury is a straight-shooter who knows everyone and everything in her circle. During the first season, she acted as a parental figure to Simon, who she had known since he was a child, and tried to encourage him to open himself up to love with Daphne. Now, she's acting as a guide to the Sharmas, who have many roadblocks in their way before they can successfully find husbands. Fortunately for them, there’s nothing Lady Danbury likes more than a hefty dose of matchmaking and meddling. 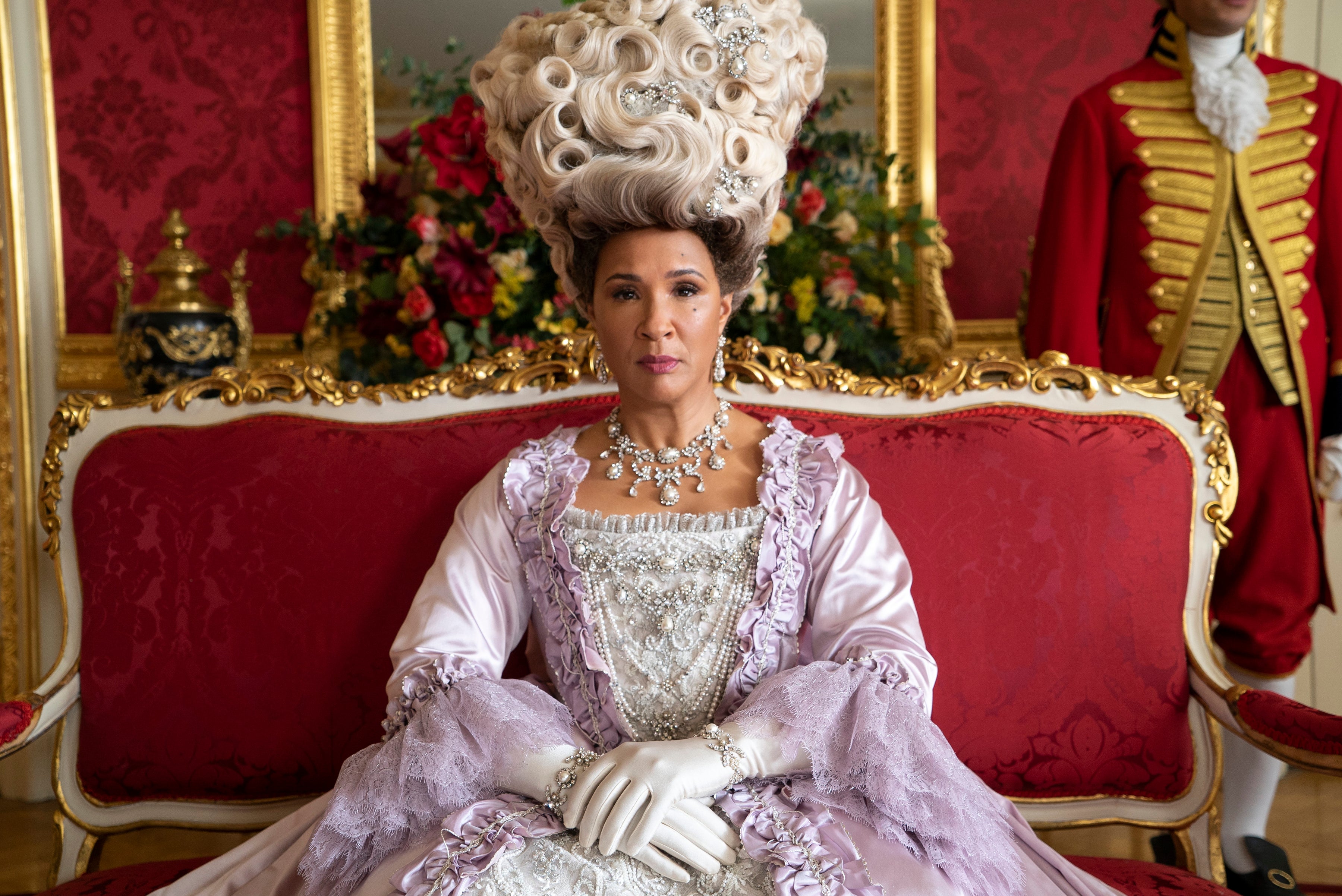 The cream of the crop, the absolute top of the social ladder, is, of course, the Queen. The wife of George III, who was infamously nicknamed the mad king, Charlotte has the power to make or break an eligible young person's marriage prospects. In the first episode of season one, she declared Daphne to be "the diamond of the season." In the Bridgerton universe, the King's marriage to a Black woman helped to open the doors for a more racially diverse and accepting society. The Queen became obsessed with uncovering the identity of Lady Whistledown, even recruiting Eloise to help her. Her pursuit continues in season two. 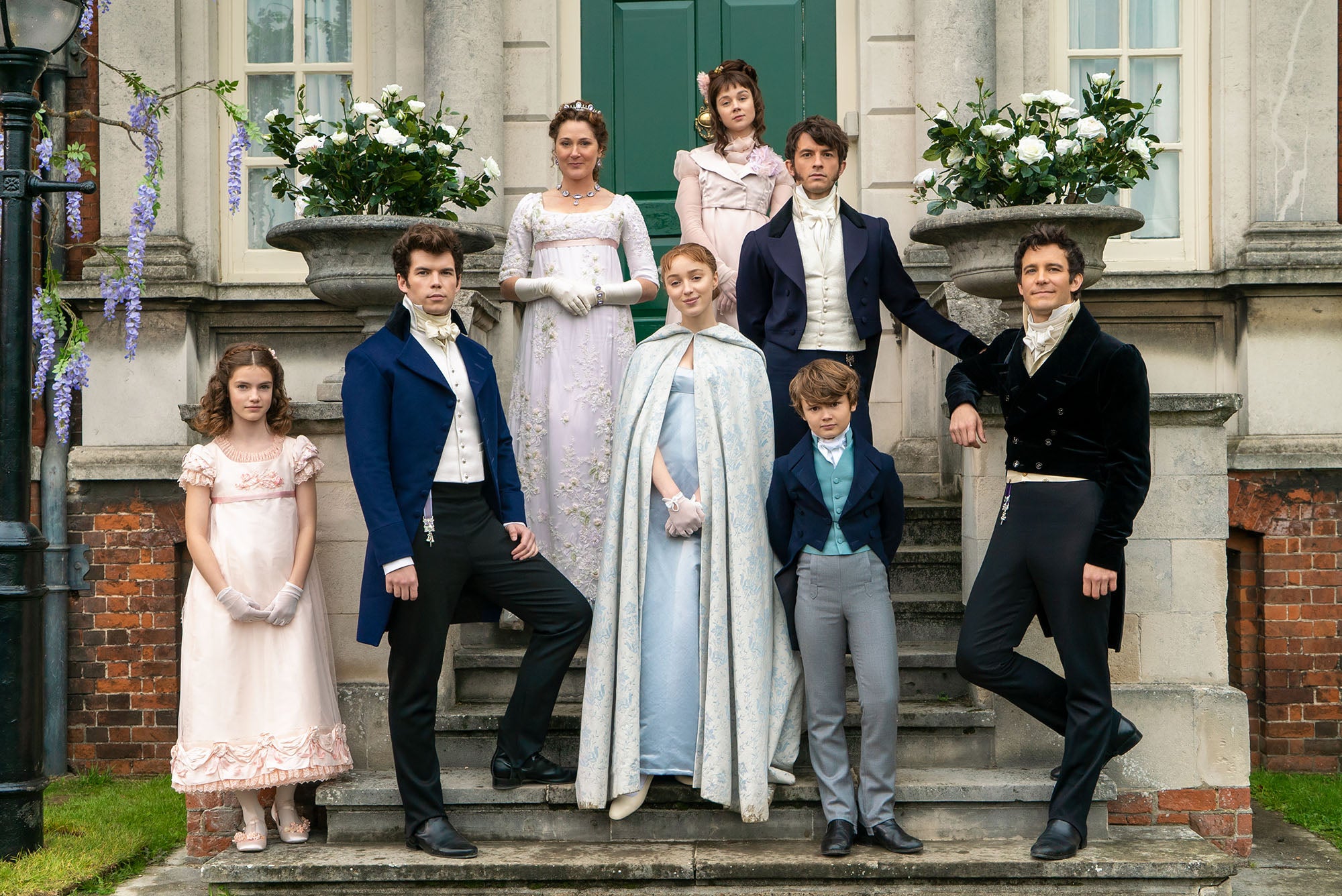 The series is primarily focused on the five eldest Bridgerton siblings but that could change as the seasons pass. The youngest three are Francesca (who barely appears in Season 1) Gregory, and Hyacinth, with the latter two being mere children in the first season. Francesca's story appears in the sixth novel in the series, When He Was Wicked, where it is revealed that she married a man named John Stirling, only to be widowed two years later. She then returns home to grieve and find herself, only to stumble upon John's womanizing cousin Michael, who has confessed his feelings for Francesca mere days before her wedding. Francesca's story is unique among the Bridgerton clan in that it's a second marriage.

A grown-up Hyacinth meets her match in book seven, It's In His Kiss, in the form of Gareth St. Clair, a young man with a troubled family who seeks the youngest Bridgerton daughter's help in uncovering his past. The last of the eight novels, On the Way to the Wedding, is for grown-up Gregory. The lovestruck boy hopes to win over Miss Hermione Watson but soon finds himself enraptured with Lucy Abernathy, her best friend. The only problem: she's already engaged, and Gregory may have to cause a ruckus at the wedding to share his true feelings.

Looking for more to check out on Netflix?