Kirby and the Forgotten Land Review – Stretching Into A New Dimension 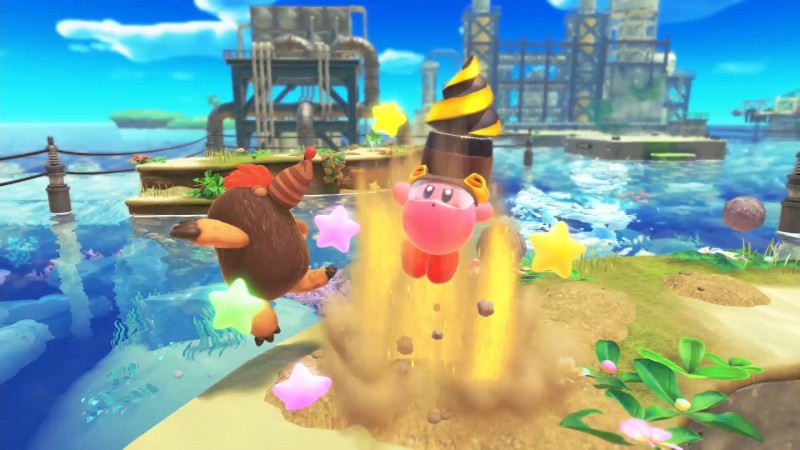 Nintendo’s insatiable pink mascot finally has his first full-featured 3D adventure with Kirby and the Forgotten Land. After being sucked into a mysterious vortex (oh, how the tables have turned), he finds himself transported to what looks to be an unknown post-apocalyptic world. By building upon his old bag of tricks and adding successful new gimmicks like Mouthful Mode, Kirby makes a fantastic transition to the third dimension.

Kirby’s classic suite of abilities are all here and are as fun to use as ever, only now he’s able to use them in 3D space. He can jump and float as well as vacuum enemies and items into his mouth to fire them out at targets. I rarely felt like I wasn’t in control and I’m able to platform with precision when it’s required. The series’ staple of copy abilities that let Kirby absorb an enemy’s powers and use them as his own is, as always, the foundation of his arsenal. These copied powers range from giving Kirby a sword, making him a Katamari-like rolling ball of needles, and creating massive, screen-clearing explosions with the Crash ability.

Abilities can be upgraded in Waddle Dee Town after finding corresponding blueprints in levels. These upgrades add new twists and tweaks to each style of attack. My favorite is the evolution of the Bomb skill, which trades regular, rollable bombs for ones that chain together, causing larger explosions the more that are attached to one another. And later, another evolution allows for homing explosives. These more powerful takes on abilities are swappable with their earlier versions, but while there are probably use cases for each variation, I never found a reason to look back after upgrading. When Kirby’s natural talents aren’t enough to get him through certain obstacles, he can stretch into a new realm of transformations in the Forgotten Land.

Mouthful Mode is a new tool at Kirby’s disposal that allows him to vacuum up large objects with awkward shapes, stretching Kirby’s form around it to take control to solve puzzles. With a mouthful of traffic cone, Kirby can slam the cone-tip into cracks in the ground to break through to what’s beneath. Or, after eating a car, he can speed around the level and bust through obstacles with ease. These Mouthful objects are found in just about every level, and while usually confined to certain areas to be used for a specific purpose, the game allows for more flexibility to take these forms through levels than I expected. Just about every Mouthful form is great for taking out any Beast Pack minions in and around the area, and it’s an opportunity I take whenever it’s presented. Often, if a level doesn’t force Kirby to cough up one of these abilities when expected, there’s a reason for it, making for an opportunity to explore even further. Mouthful Mode is a lot of fun and does a great job of breaking up each level, and each transformation brings a different pace and gameplay hook to mess around with. Plus, it easily brings a smile to my face whenever Kirby finds another ridiculous and helpful gadget to envelop.

While I enjoy just about everything about Kirby’s moveset, I have a couple of tiny grievances to air. One unfortunate side effect of moving to 3D is that Kirby sometimes has an arbitrary limit to vertical movement, capping his ascent far lower than expected. It’s not a huge problem, but it’s frustrating when I can’t jump up to a surface that looks scalable, while other times, I can make daring escapes from pits with ease. Also, the overall speed of the gameplay is much slower than other Nintendo platformers, making exploration sluggish. This is made up for a bit with fun exploration and abilities that can sometimes accelerate the speed at which Kirby moves throughout the varied areas of the new world he’s been stranded on.

Kirby finds himself in this land full of overgrown malls, towns, and theme parks; all of the original residents of these areas are long gone. The setting is quite different from the typical worlds Kirby visits, and despite the appearance of the lands’ society crumbling into ruin, the game doesn’t dwell on the mystery of why everyone is missing. That’s not to say it isn’t addressed, but the game instead focuses on the urgency of saving the missing Waddle Dees and recovering their ransacked village from the ones who kidnapped the residents.

Occupying the Forgotten Land now is the Beast Pack, a formidable force of animals led by tough monstrous bosses that have kidnapped the Waddle Dees and serve as tentpole boss fights at the conclusion to each world. Bosses are given open arenas to do battle in where the camera focuses on them, unlike the usually fixed camera angles present in the rest of the game’s stages. This gives them a big fight feel. At times, these bosses, like the agile cheetah Clawroline or goofy dancing armadillo Sillydillo, offer complex moves to evade and make battles pleasantly play out like a third-person action title rather than a platformer. I loved learning the patterns of these big bads and conquering them using whichever Copy Ability I happened to have on hand.

Once let loose on a stage, Kirby’s primary goal is to rescue the caged Waddle Dee’s found at the end of every somewhat linear, yet explorable, level. Additionally, there are a handful of secondary mystery objectives peppered throughout each area, offering even more Waddle Dees as rewards for completing them. I enjoyed seeking out secret rooms, finding and tearing down wanted posters, or consuming a certain number of donuts. It’s a natural way to extend my visit to each level, and I find myself returning to unfinished tasks to search every nook and cranny and fully complete a level. The mainline levels aren’t all that difficult, leaning more on general exploration than platforming prowess. That’s not to say there aren’t tough moments, but the difficulty I often craved was to be found elsewhere in the world.

Accompanying the standard levels in each world are extra stages called Treasure Road, which are challenges that I loved going out of my way to complete. These provide Kirby with a specific Copy Ability or Mouthful form the level is built around and tasks the player to finish the stage in a certain amount of time. Completing a level of Treasure Road supplies a precious Rare Stone, which can be cashed in for ability evolutions, making these side missions worth playing. These helped me recognize the nuances of Kirby’s many abilities and were a lot of fun to solve and complete the task at hand. Each Treasure Road level has an even tighter target time to hit, rewarding some additional coins, which keeps me coming back to try to hit those more demanding times.

I enjoyed the loop of completing the main levels, hitting the Treasure Road stages that opened, heading back to Waddle Dee Town to see what new buildings were available, and evolving my Copy Abilities with Rare Stones and blueprints I found on my journey. There always feels like there’s something new to check out, fueling the urge to dive into another level. Even the minigames that unlock in town, like a simplified foodservice game inspired by games like Cook, Serve, Delicious or angling in a fishing hole, are fun diversions. More challenging tasks such as the boss rush available at the colosseum rewards welcome items like blueprints, coins, or other collectibles.

Kirby and the Forgotten Land is great and should not be missed for Kirby and platforming fans alike. This isn’t quite the pink puff’s rendition of Super Mario 64, but it brings the series successfully into the 3D realm and doesn’t need to rely solely on its latest entertaining gimmick. Kirby thankfully remains as charming as ever and this new adventure can effortlessly provide hours of glee.