Ghostbusters: Spirits Unleashed Is A New 4v1 Multiplayer Title By The Makers Of Predator: Hunting Grounds 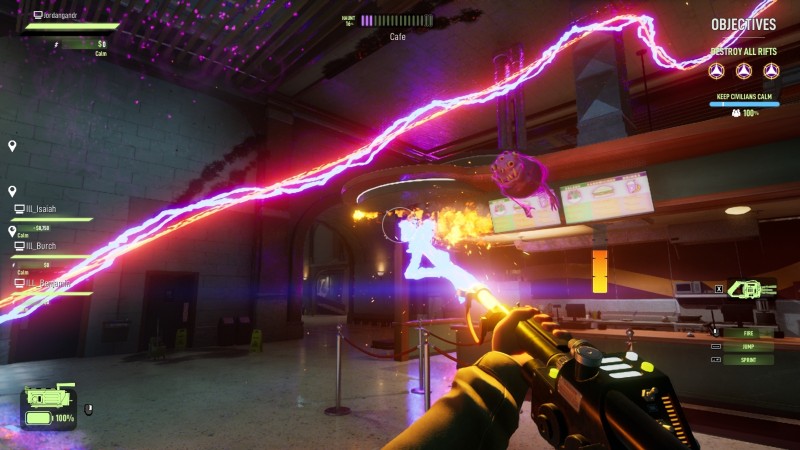 Illfonic has cut its teeth on licensed asymmetrical multiplayer games. After releasing Friday the 13th in 2017 and Predator: Hunting Grounds in 2020, its next title tackles one of the most beloved movie franchises ever: Ghostbusters.

Ghostbusters: Spirits Unleashed is a 4v1 game set to launch later this year. Up to four players control newly recruited ghostbusters to battle and catch a player-controlled specter. Narratively, Spirits Unleashed takes place shortly after the events of Ghostbusters: Afterlife. Winston Zeddemore has relaunched the Ghostbusters business along with Ray Stantz, voiced by Ernie Hudson and Dan Aykroyd, respectively. You’ll find both characters in the Firehouse, which serves as an interactive menu and explorable hub where players matchmake, purchase cosmetics for ghostbusters, unlock new ghost characters, and explore. The Firehouse features several interactive points of interest, such as Ray’s occult book store (where players initiate ghost play) and a firing range for proton packs. Players even deposit ghosts into the containment unit after missions. The Ecto-1 is present, of course, but you can’t drive it yourself; it automatically transports players to missions.

Answering the call whisks players to a variety of maps across the country, though we only saw a museum in our demo. For the ghostbusters, the goal of each match is to catch the ghost while calming frightened civilians. Doing this reduces a global haunt meter, which indicates how infested an area is with paranormal activity. As this meter raises, the area takes on a more sinister appearance. Using PKE meters, you’ll hone in on haunted objects to track the ghost player and, once found, blast them with your particle thrower. In a nod to the Afterlife film, players also have the ability to temporarily stun ghosts. Spirits Unleashed encourages teamwork, so much so that crossing the streams is now beneficial as it strengthens proton streams to better wrangle troublesome ghouls. Be mindful of where you fire, though; in true Ghostbusters fashion, causing too much property damage raises a bill that reduces the experience points earned post-match.

Combining forces is important, but it’s also smart to divide and conquer. One player may need to focus on taking care of civilians while another locates rifts, portals severing as spawn points for the ghost player. Voice-chat helps ‘busters keep in touch and better formulate strategies for bagging their target.

Meanwhile, the ghost player’s mission is to scare all bystanders out of levels while maxing out the global haunt meter. Players can unlock several archetypes of spirits (including Slimer), each sporting several abilities. These include seeing through walls to locate targets, possessing objects to attack players or hide in plain sight, confusing PKE detection by making items emit ecto signals, and sliming ghostbusters to slow or immobilize them. Using these powers costs ectoplasm, a resource that replenishes whenever players possess an object. Ghost players will also want to protect their rifts as they serve as extra lives, but they can sacrifice these portals to increase their own power. Causing enough chaos to fill the global haunt meter triggers a sudden death mode that gives ghostbusters a last stand to turn the tide back in their favor within a fully haunted arena.

Ghostbusters: Spirits Unleashed supports cross-play and can be played solo offline with AI teammates/enemies. Narrative-focused players can also unlock new story elements by achieving gameplay milestones. Illfonic plans to share more about the game in the coming months, but Ghostbusters: Spirits Unleashed is slated to launch during Q4 2022 for PlayStation 5, Xbox Series X/S, PlayStation 4, Xbox One, and PC via the Epic Game Store.