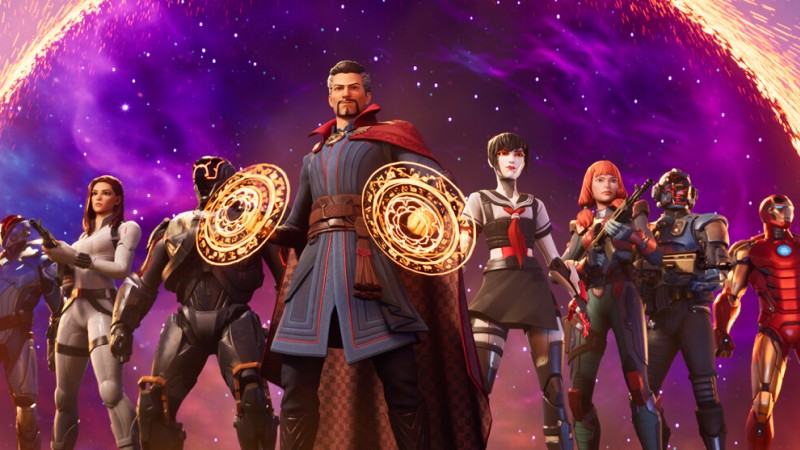 Fortnite’s new season is here, and Marvel is once again in the spotlight. Players now have the chance to unlock Doctor Strange and Prowler as new skins. Iron Man is also making a return after a long hiatus.

The new season kicks off today and runs into the summer. From March 30 to April 3, Epic Games is committing all Fortnite proceeds to humanitarian relief for people affected by the war in Ukraine. Epic Games’ post states that Xbox is also donating: “Xbox is joining us in this effort and is committing their net proceeds for Fortnite during this time, so that we can get more aid to the people of Ukraine.” You can read more about Epic Games and Xbox’s support here.

Chapter 3, Season 2: Resistance continues the battle for the Zero Point, and gives players plenty of new abilities and gadgets to use in this endeavor. The player’s default movement speed has increased, and an additional speed burst can be gained through the new sprint move. The player can also use a mantle to grab onto ledges and hoist themselves up. You no longer need to build to reach new heights.

Speaking of building, the ability is currently gone, thanks to a story development you can see in the trailer above. You’ll now need to use the environment and new moveset to gain the upper hand. Epic will obviously bring back building, but for the short term, it’s gone and the game is going to feel dramatically different.

Epic also added a new slate of vehicles to add a little more mayhem to the mix. An IO Titan Tank and Battle Bus can be used, but you’ll need to save up some bars to build the Bus, which features a cow catcher, chonkers tires, and two types of turrets.

Doctor Strange and Prowler are tied to the new Battle Pass. As you work to unlock him, you can also pick up additional skins for characters like The Origin, Gunnar, and Tuski 2.0.

Epic was surprisingly quiet going into the launch of this new season, yet while lacking a big event to set it up, the changes to gameplay and unlockable content are huge and should keep Fortnite fans playing until the next season arrives.