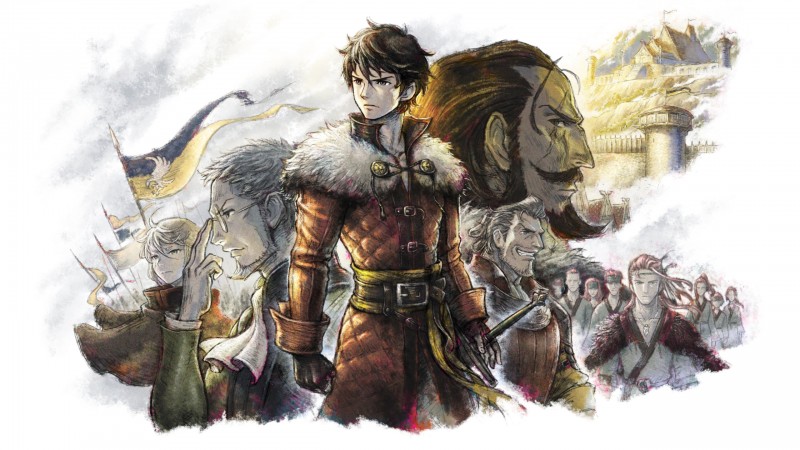 Political storylines are often a reminder of the ugliness that exists in our world. Greed and corruption often drive the ship, leading those in charge to make difficult decisions about no-win situations. Triangle Strategy represents the worst side of humanity in these instances, forcing you to question if peace is a naive dream and if we can ever get out of the cycle of war.

As a newly appointed leader, that’s up to you to decide. Thought-provoking questions about how to handle horrible situations make Triangle Strategy a gripping experience, while the entertaining strategy combat keeps you coming back to face them. Unfortunately, some stumbles along the way keep Triangle Strategy from fully capitalizing on these appealing aspects, but even so, it offers an engaging experience on and off the battlefield.

Triangle Strategy excels at its turn-based strategy mechanics. As you play, you build up an army of different units with classes to help you fight in grid-based battles, where positioning and flanking are key. I used elevation to my advantage, as you can deal great damage and stay safe from counterattacks, and I enjoyed finding new places to get an edge, whether it was positioning myself on top of houses or cliffs. However, the best part is the different abilities your party members have and seeing the synergy in action. My favorite moment was when I pushed back an enemy off a cliff for fall damage straight into a trap I set with another character a few turns earlier.

You also get a great variety of fighters; I had a martial arts granny and a child circus performer join my ranks. The circus performer could make a decoy to fake out the competition and absorb damage, while another character could change the weather to affect the power of my magic. Speaking of, the elemental power you have at your disposal is extremely satisfying when combined with the environment. See an enemy standing in a puddle? Use a lightning spell to electrocute and paralyze them.

There’s also great delight in watching your team level up, learn new abilities, and roam your headquarters. Three different weapon tiers and class promotion levels exist for upgrading your characters. The former is more about unlocking stat boosts and passive abilities, while the latter improves your stats and opens cool new abilities. Due to how linear progression is, I wish there was more customization in building characters, but it’s an easy system to grasp, and I always looked forward to new abilities due to the new strategies they’d open.

Unfortunately, battles can be a little repetitive and long-winded; don’t be surprised if you spend 30 to 45 minutes in a single encounter. Towards the end of the game, more variety in your objectives open, such as escort missions and defusing bombs, but I wouldn’t call these fun, mostly when they only prolong already-lengthy combat sequences. Also, don’t expect to get through the journey without having to level grind, especially as you get to the later stages. Battles have a limit to how many members you can bring in, and even the characters you take into every bout won’t match the recommended level for every battle stage. Thankfully, grinding isn’t too much of a pain, as there are mock battles that give great items for upgrades and allow you to gain a level or two for completing.

Triangle Strategy’s story centers on three nations that control vital resources, which caused great conflict in the past. For the last 30 years, the countries have worked together, sharing the resources to maintain peace. However, history tends to repeat itself, and a power-hungry leader turns everything on its head, bringing out the worst in all the nations’ leaders for some Game-of-Thrones style levels of political scheming. As a newly appointed leader named Serenoa, you must decide the foundation to lay for a new era.

The overall plot isn’t anything new, and it’s told through boring, protracted cutscenes. However, it’s the way Triangle Strategy presents decisions and deceptions that keeps things fresh. Often, you see the different nations plotting in the background their next move, just enough to get you to question if you can trust them. Then you’re usually presented with a choice that involves the suspicious party in some way. When’s the best time to confront them? Do you use them to gain allies and supplies to get stronger for now, or cut all ties for fear of their inevitable betrayal?

You decide your strategy, which usually caters to one of three convictions: Utility, Morality, or Liberty. This will often influence who joins your army. Each conviction is also represented by a character close to Serenoa: his childhood best friend, new fiancé, or loyal advisor. It adds a nice personal touch, as I was often torn between these personalities I liked versus their position on what to do next. When I chose against their preferred path, I felt the sting of letting them down, and sometimes the consequences impacted whether they’d even join me in battle.

Every decision has layers; I could see equal advantages and disadvantages and often felt fearful over their potential repercussions. It made me weigh every choice very carefully. I even found myself surprised by some of my selections. Do you battle with an enemy to take on an even greater threat? Should a few suffer for the greater good of many? Triangle Strategy does a fantastic job at making you feel the plight of a leader, and the narrative isn’t afraid to take dark turns. Sometimes the ominous and hopeless tone made the game hard to play, but I appreciate the writers not dialing back on humanity’s darker tendencies, especially in times of war and political unrest.

Playing Triangle Strategy’s battles is probably the easiest and most carefree part of the experience. There’s a lot of fun in strategizing and watching your characters’ abilities shine, and I loved outsmarting the competition. The hardest part of the journey is the choices alongside the bleak realities it makes you confront about injustices of the world. The game has multiple endings, letting you pick your vision for the future. Even with my ending, which was one for a much more idealized, compassionate world, I was left a little disheartened. But, maybe, that’s the point. And for that, Triangle Strategy isn’t like most games you’ll play, which is what makes it special, even if it’s not always perfect in the delivery of its harsh truths.