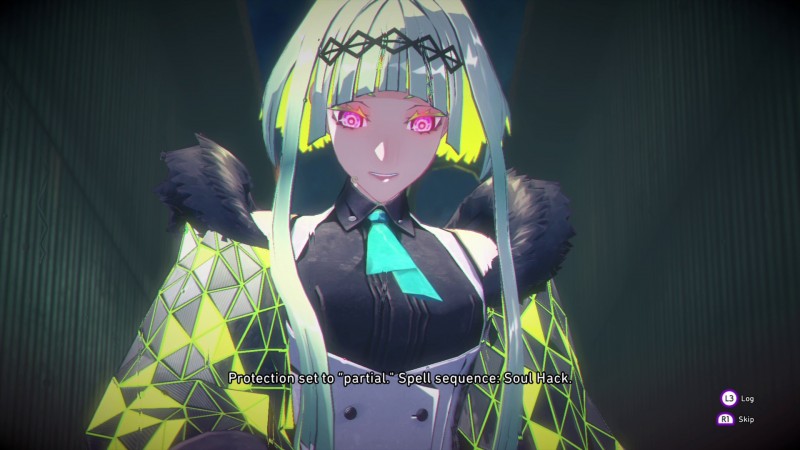 Announced this past February, Altus is working on a sequel to Shin Megami Tensei offshoot Soul Hackers that’s set to release later on this year. A successor to both the Soul Hackers and Devil Summoner series, this new title features elements of both games that Atlus says will tell a new tale of humans and technology. Game Informer has been provided with an exclusive early look at the story and characters of Soul Hackers 2, as well as a ton of screenshots and art you can feast your eyes on below. So, let’s learn a bit more about the world and characters of the long-awaited Soul Hackers revival.

Soul Hackers 2 takes place in the mid-21st century, where a sentient being of data called Aion watches over the world. When Aion discovers the fate of the world is in jeopardy, it sends two agents, autonomous fragments and physical realizations of Aion’s mind called Ringo and Figue, to Earth to find and protect two individuals who are essential to saving the world. Unfortunately and shockingly for Ringo, Figue, and the world, those important people are already dead.

The main protagonist for Soul Hackers 2, Ringo, is practically a newborn, having recently been given life by Aion. Because she’s a part of Aion, she can use many of the being’s abilities, albeit on a smaller scale. She has a strong fascination with humans and their society, which she shares with Figue, the other agent of Aion, who acts as an older sibling to Ringo. Figue will support Ringo and the rest of Soul Hacker 2’s ever-growing cast from behind the scenes. Using a power inherent to Aion called Soul Hack, Ringo can tap into the memories of the dead to trigger their regrets and bring them back to life. She uses this handy trick to revive Arrow, one of the deceased targets whose death is central to ushering in the impending apocalypse.

Arrow is a Devil Summoner able to harness the power of demons, hailing the Yatagarasu faction of Summoners. He dresses in black and crimson casual wear, using a trusty pistol in battle. Arrow has a strong moral code and is said to be passionate despite being otherwise gentle and quiet. More of these Demon Summoners will join the team as Ringo Soul Hacks them back to life, giving each resurrected member a chance to investigate their untimely deaths. Other Devil Summoners she’ll encounter include Milady, a calm, logical, and efficient Summoner from the Phantom Society who uses black sais as her go-to weapon, and Saizo, a romantic freelancer whose life was taken by a member of that very same faction. Saizo wears a stylish white suit and wields a machine gun in battle. He’ll often act as the intermediary between teammates as conflicts break out between those who don’t see eye-to-eye.

The weapons used by the Devil Summoners mentioned above are called COMPs. These COMPs assist in summoning Demons and can be altered or accessorized with items important to the wielder. Speaking of Demons, you can see some of the art of various demons found in Soul Hackers 2 above, including series mascot Jack Frost.