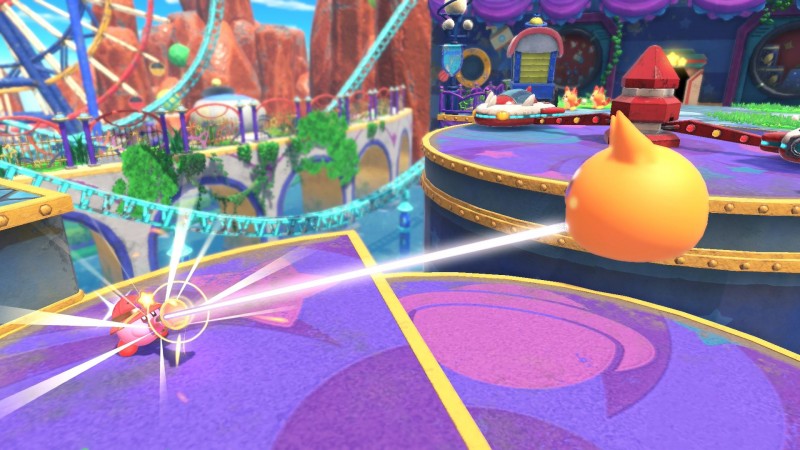 Kirby returns to the Nintendo Switch later this month in the new 3D platforming adventure, Kirby and the Forgotten Land. In it, Kirby is transported to another world, far from his home on Popstar, to a location that looks a lot like Earth, at least in the early levels. There in the titular Forgotten Land, Kirby will have to use all of his valuable Copy Abilities and a few new tricks like the very meme-able Mouthful Mode to explore and survive this unfamiliar setting. This week, I was able to go hands-on with the first world of the game, similar to what Switch owners can play today in a new demo that’s now available through the Nintendo eShop.

Leave it to a Kirby game to make what looks to be a post-apocalyptic environment charming and delightful despite the dire implications of the setting’s entirely missing civilization. I was allowed to play through the entirety of the first world, the dilapidated, overgrown city environment called Natural Plains. Levels such as the Downtown Grassland and A Trip to Alivel Mall show plenty of signs of life despite the disrepair of the buildings and streets. Moss, vines, and grass have taken claim to swaths of concrete and steel, while wildlife like the new adorable doglike enemies called Awoofies have taken residence in place of whoever built and lived or worked in these abandoned structures. Many of the walls and streets are cracked and fragile, offering plenty of places for Kirby to crash and blast through to find hidden areas or secret items. 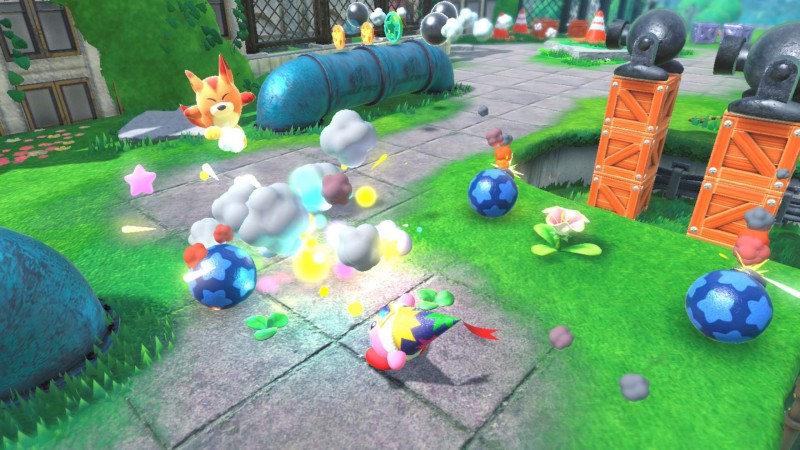 While this new Kirby adventure is a break from its 2D roots, opting for 3D control and environments, it plays more like Mario 3D World than Mario Odyssey. Kirby’s basic moveset is more or less the same as ever. He can run, jump, inflate himself and float into the air to reach higher and further areas. And Kirby can, of course, still consume enemies and spit out their starry essence to deal damage to foes as well. He uses these moves to traverse levels that are linear in nature, ushering Kirby from start to finish, solve platforming or environmental puzzles, gobble enemies, and gain powers along the way. I was worried about bringing Kirby’s naturally floaty controls into a complex, 3D world, but in a matter of minutes with my hands on Forgotten Land, my concerns were briskly cast aside. Everything Kirby does – running, jumping, floating, and vacuuming objects – feels tight, and, for the most part, precise. Precision is important with many of the powers Kirby can take on through Copy Abilities, and even the new Mouthful Mode.

Mouthful Mode is every bit as charming as it is in the trailers. For the uninitiated, Kirby can consume specific objects that are too big a bite for him to chew, leaving Kirby’s pink skin stretched around that thing and somehow taking control of that oversized snack. Mouthful Mode is introduced when Kirby inhales a rusted beater of a car, stretching his form over the body and hood, but leaving the bottom of the chassis and wheels exposed. From there, I was able to drive the car around the level, crashing through cracked walls, and making sick jumps over gaps using a tire-burning boost.

Kirby’s insatiable appetite doesn’t begin and end at cars, though. Mouthful Mode is all over the Natural Plains levels. Snarfing down a vending machine turns Kirby into a big, waddling box that can shoot a limited amount of soda cans from his mouth, while shoving a staircase in his gullet lets him reposition the steps in front of hard to reach platforms. Or it can be used to topple over and smash crates or enemies. Who says stairs can do only one thing? Mouthful Mode can look like a shallow gimmick at first glance, but I’ve found it to be an entertaining component to puzzles so far. I rarely kept these forms for long since many limit mobility considerably. Luckily, even when going into Mouthful Mode, the bread and butter of Kirby’s arsenal, his Copy Abilities remain equipped.

These attributes absorbed by enemies or elemental items found in levels transform our hero into the essence of whatever he ate. Classic Copy skills like Fire, Cutter, Sword, Ice, and Bomb are all here in the opening world of Normal Plains, though there’s a bit more nuance to these attacks than their previous iterations. Hitting the attack button while equipped with Bomb, for instance, will bowl out an explosive ball in whatever direction Kirby is facing. For even more fun and destruction, I’d roll out bombs in every direction, causing ample destruction wherever I’d go. Standing still (or while in the air) and holding the attack button would trigger an arched aiming reticle, allowing for precision tosses to rain from the sky wherever I deemed it to land. Just about every Copy skill has various moves and situational tweaks that are fun to explore and utilize.

New to Kirby’s Copy Ability slate, and playable in these early levels, is a power called Ranger that equips Kirby with a pistol-like gun which he can shoot forward in any direction. There’s also a charge attack that lets Kirby aim the projectile in any direction and blasts a large projectile at a specified area. It’s a neat and unique ability that’s used to its fullest in target shooting scenarios to unlock secrets in levels or cap a baddie from across the stage. My skills in abilities like this were tested in a series of challenging levels called Treasure Road.

Natural Plains features seven Treasure Road levels that set Kirby up with a specific Copy or Mouthful ability and task him with using those moves to finish a level within a time limit. The Ranger challenge features a series of moving targets to shoot at a distance while cannons or enemies are sometimes shooting at you. Another 3 star-rated challenge popped a traffic cone inside Kirby to use to break water mains and ride the torrent of water upwards to the next part of the level. Some levels offer plenty of time to complete them regardless of skill level, while others force a time of under a minute. Either way, completing a Treasure Road challenge rewards me with a Rare Stone, a technicolor crystalline star that can be cashed in to upgrade Copy Abilities in Waddle Dee Village.

Kirby’s main objective in each level is to rescue caged Waddle Dees at the end of each level segment. Many are placed right on the critical path and are hard to miss, while others require seeking out hidden corridors or environmental triggers set off by specific copy abilities. Even more Waddle Dees can be earned by performing certain tasks in a level like making a number of flowers bloom or cruising around in Car Mouth mode without falling off a cliff. Any and all Waddle Dees saved gather in the Waddle Dee Village, where the more Waddle-folk collected helps to rebuild this destroyed town. Buildings rebuilt during my time in the first world include a movie theater where cutscenes can be replayed and Waddle Dee’s Weapon Shop where Kirby can upgrade and evolve each Copy Ability at the cost of blueprints, Rare Stones, and Star Coins, which are the main collectible. These upgrades can greatly change abilities, like when Cutter is evolved into Chakram Cutter, which adds significantly more projectiles to attacks and changes the look of Kirby’s hat and the weapons he throws.

There are plenty more levels to explore, Treasure Roads to conquer, abilities to upgrade, and Waddle Dee structures to build past the Natural Plains, and I’m excited to see it. I’ve had a great time with the early hours of Kirby and the Forgotten Land, but these opening levels really feel like the prologue setting up a grand adventure with more challenge and turmoil. The tail end of the five main levels I played offered plenty of exploration and threatened to take Kirby’s life down to zero more than once, but the final threat of my preview, a big gorilla boss named Gorimondo who does require a tiny bit of pattern recognition and a whole lot of bombs in the face to take out, was a snore. My hope is that Kirby’s first truly 3D adventure provides a little more depth in gameplay and keeps offering increasingly weird and wonderful Mouthful moments. If those two aspects follow that trajectory, I have a feeling I’m going to have a great vacation in the Forgotten Land.