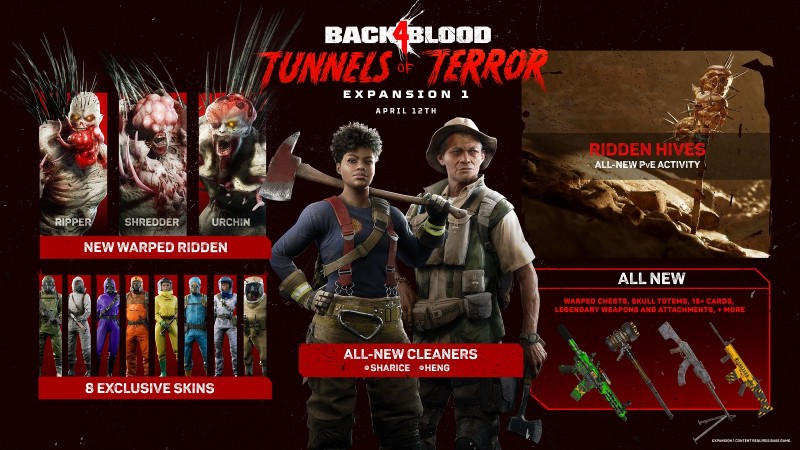 Have you survived the zombie hordes and now you’re looking for some new challenges? The upcoming Back 4 Blood expansion, Tunnels of Terror, comes with some fearsome fare that even the most seasoned survivors will have to adapt to. In a tweet today, Back 4 Blood laid out a bit of the new content scheduled to arrive on April 12.

Tunnels of Terror will be coming to Fort Hope on April 12th, 2022. Here’s a little sneak peek on what to look forward to! pic.twitter.com/AOrigv2UuK

The update includes two new cleaners, Sharice and Heng, and three kinds of warped ridden to face-off against. Yes, that’s a fire axe that Sharice is wielding, so the undead are in serious trouble. The potentially much bigger news is that a new PvE experience is also coming with this update, the ridden hives. Of course, there are all kinds of new loot to be had as well, so that should have cleaners crawling back to camp to take on these new threats. Warped chests, new cards, and legendary weapons are all on deck to help fight back against the undead tide.

The Tunnels of Terror is scheduled to land on April 12 on Xbox Series X/S, Xbox One, PlayStation 4, PlayStation 5, and PC. Are you planning to head into the tunnels?

Miss our Back 4 Blood review? Check it out here.