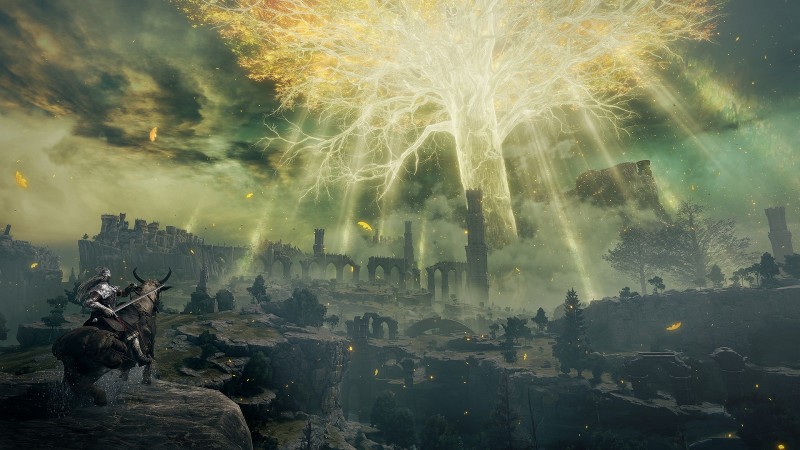 Once in a great while, a game comes along that seamlessly combines impeccable gameplay, a wondrous world, incredible tone-setting music, and unparalleled art direction. That game is From Software’s Elden Ring, an action RPG that channels the best aspects of the studio’s last decade of work into one enormous package. This absurdly ambitious open world captivated my curiosity, enticed me with puzzles, secrets, and mysteries, and served up unbelievably satisfying moments as I experienced one of the most extraordinary adventures of all time. From my initial foray into the world to the final moments, every step of the journey is a note in a personalized epic that kept me coming back for more. This trek through dark and twisted fantasy is an endless exploration, continually serving up sensational sights that only get more enthralling and fantastic as the voyage goes on.

The Lands Between is a world full of discovery, and while a clear path forward exists for those seeking guidance, roaming the lands unfettered without a particular goal in mind often yields surprises. I often had a spot to explore marked on my map and got off-track along the way, sometimes leading to entirely new areas and feature-dense zones. Elden Ring is not a theme park-style open world where each ride is bolstered by breadcrumbs so they won’t be missed – there are significant areas, bosses, dungeons, and other huge revelations that can be passed by, making these finds even more delightful. Even after over 55 hours, I know that I’ve missed plenty. Instead of pining over what I haven’t found, I’m inspired to keep exploring. The grandiose world is chock full of characters, quests, and various dungeon crawls ranging from tiny catacombs to massive multilayered tombs. While the journey starts with little caves, mines, and other dungeon delves, these experiences become more complex. Two-room affairs eventually become intricate teleport puzzles or scenarios where you discover unusual ways to interact with the environment, like learning to use traps for traversal or sniffing out secret walls.

Even the most straightforward overworld dungeons house hidden boss rooms and treasures, in addition to their standard yields, rewarding the most inquisitive adventurers. Finding creative ways to travel to places that don’t appear accessible before the standard path guides you there feels remarkably refreshing, and more than one area delivers picturesque vistas upon arrival. Looking over a new area for the first time and realizing you can go everywhere you see is breathtaking and overwhelming. Some open-world locals, like churches, ruins, and Erdtrees, feel a bit familiar from realm to realm, but make no mistake there are numerous and unique points to explore and get lost in for hours. From mysterious castles to haunted magical grounds, the world is full of exciting diversions.

Your character is incredibly customizable, which I found highly rewarding. You can attach various skills and scaling mechanics across the board, allowing you to truly create your own vision of a traveling hero. Respecialization and alterations allow you to finely tweak your creation without worrying too much about experimentation along the way as you arm yourself with everything from explosive pots to potent perfumes to complement your ever-growing arsenal. Combat will vary greatly from player to player and build to build, but the precise dance of melee combat is more refined and diverse than ever. Featuring a behind-the-scenes stagger system that rewards players for taking chances with timing, the flow of battle makes the singular spammy strike a lesser choice in the face of a daunting foe.

The open world is majestic, dripping with flavor and atmosphere, and full of fabulous finds. However, the legacy dungeons are the stuff of legend, often connecting to the outside from multiple points. These curated sprawls are a dream to dissect, and Elden Ring often offers different ways to maneuver through these areas. For instance, in one of these giant dungeons, I discovered a completely different way to “solve” the route to the final boss – and then went back and found a divergent path through another environment, leading to a wealth of battles, bosses, and loot. Sometimes, access to certain areas is in the last place you look, but the route to unearth it is laden with even more attractive paths to pursue.

While some monster and boss designs are reused, the scope and scale of Elden Ring are enormous, which makes the repetition easy to ignore. I feel like I ran into around one hundred bosses in my playthrough. I’m not exaggerating. Some of these can feel commonplace and uninteresting, at the end of a small dungeon, like a repeat cave troll or magma drake, but the overall diversity of encounters meant that I never knew exactly what I was going up against at the end of any given expedition. I might run into a reskinned knight, but I might also go toe-to-toe against something truly astronomical.

The big bosses, generally found at the end of legacy dungeons, feel like wonderful wars against demigods. These brilliant set piece battles are thrilling exclamation points to an outrageous odyssey, absolute spectacles, and masterful combinations of tension and triumph. Elden Ring has the distinction of having the best and most challenging boss battle in any From Software game to date. Hidden away and optional, this encounter had me waking up in the middle of the night to come back and crash against its beautiful and terrifying destruction over and over again. After finally besting this opponent, I let loose a triumphant victory roar there while sitting in the dark and wearing my pajamas, wanting nothing more than to experience the encounter again. This example speaks to how unbelievably compelling and immersive Elden Ring is; I regularly put it down with the intent of doing something else and found myself back within minutes. There is always one more gnawing mystery to unravel, one more boss to beat, and one more hidden route to find.

Elden Ring challenged me, captivated me, and enchanted me, an unyielding deluge of discovery and artistic vision unbound. Elden Ring represents a truly amazing combination of various game elements that all come together to create something fascinating, special, and unforgettable. Elden Ring isn’t just the best game this year; it’s one of the best games ever made.