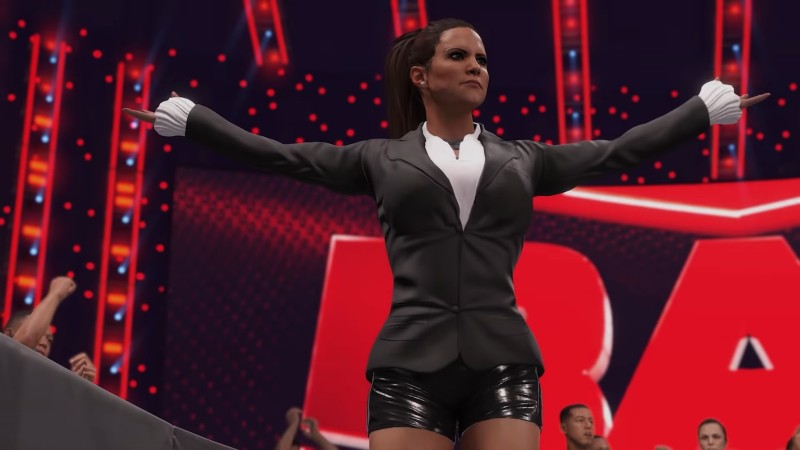 WWE 2K’s simulated grappling can be fun, but there’s something satisfying about booking your own shows, managing contracts, and drafting wrestlers, which is why 2K22’s MyGM mode is attractive. I got to sit down with this latest reinvention of the fan-favorite mode, guiding my chosen brand through a 15-week ratings war.

Conceptually, this mode has always been an interesting conundrum. Pro wrestling is a scripted sport by design, and that includes having characters portray authority figures who run things on TV but have no actual power in real life. That begs the question: are you booking shows from a real-life standpoint, i.e., deciding match outcomes and who gets that coveted “push,” or do you run things from a less realistic kayfabe angle? MyGM’s answer is “Yes.” Though you manage contracts, budgets, and superstar presentations and alignments as an actual manager would, you can also become an on-screen character and directly engage in television antics.

From a thematic standpoint, I found it odd that one superstar will make a decidedly real-life request, such as permission to change their character from heel to babyface, only for another wrestler to message you and suggest a partnership to take over the brand as if they were genuinely evil. As GM, you can remain neutral or become a corrupt character that can sabotage some careers and unfairly assist others. That includes accompanying them ringside to interfere in their matches. If you fancy yourself a dastardly Mr. McMahon-style boss, go for it. But you can also remain a less visible, impartial authority figure (think old-school Jack Tunny or NXT-era William Regal), which is what I went with. The GMs available to play include Adam Pierce, Sonya Deville, Stephanie McMahon, and Shane McMahon. You can also use a custom-made GM using the creation suite. 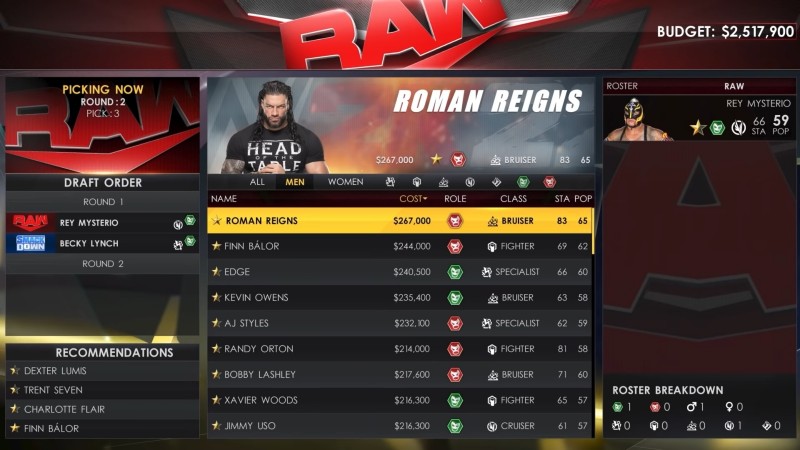 For 15 to 50 weeks, you can run Raw, Smackdown, NXT (pre-2.0), or NXT UK. I went with the original black and gold NXT brand and chose to go head-to-head with the Stephanie McMahon-led Monday Night Raw. My first order of business was drafting my superstars. The initial draft runs for eight rounds, though you can continue signing more wrestlers if you have the budget (otherwise, you can save your money for other things). Created superstars can also be uploaded as part of the draft pool.

Building my dream team was a lot of fun, namely because of the strategy that goes into it. Every superstar has ratings for stamina (how often they can perform before getting injured) and popularity, their in-ring style, as well as their current face/heel alignment. It’s not enough to just sign big, expensive names. Having a balanced roster of heroes and villains along with a healthy variety in wrestling styles is key. After all, styles make the match-ups. For example, Giants work well with Cruiserweights, and Specialists can go with anyone. I like that this incentivized me to avoid only signing my personal favorites since several of them had similar or clashing styles. I also found it wise to invest in cheaper, lesser-known talents and build them into the next Cena or Rock. Don’t sweat trying to nab everyone. Throughout the season, you can grow your roster by signing free agents as well as bringing in Legends on part-time deals.

After assembling my initial roster, it was time to book my first show. Knowing how to start can be overwhelming, so I was thankful to have some beginning tips from my boss, Triple H. The Game regularly texts players to offer advice and feedback on your show which I found to be a good barometer for what I should be doing. He’ll also make specific requests, called Commissioner Goals, like sidelining a certain talent for a week in exchange for valuable Power Cards. These purchasable perks grant useful abilities such as instantly healing burned-out stars, granting match rating boosts for championship bouts, or sabotaging a competing brand by temporarily doubling its production costs. You’ll earn money to buy new Power Cards by playing, and I found using them to be invaluable for giving my show some helping hands. 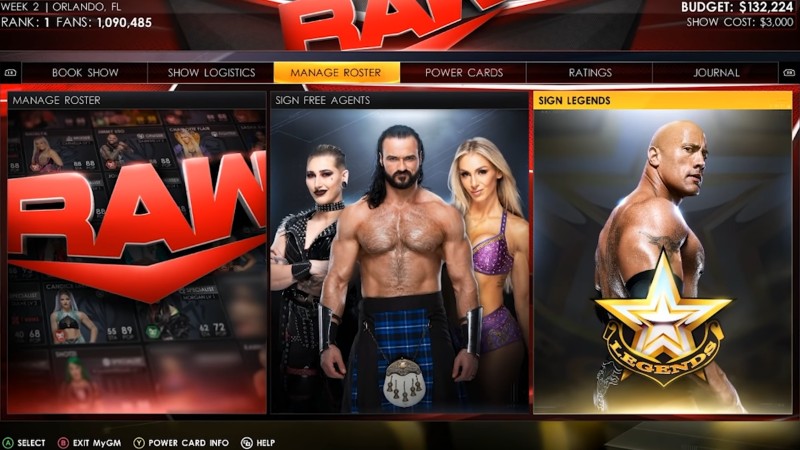 Superstar morale fluctuates depending on how you book them, and they’ll make requests that you can fulfill and ignore at your own risk. One of my top names lost a string of matches and became frustrated, demanding I give her a win and threatened to quit when she lost yet again (even holding me up for $100K). She hated it, but in my mind, it gave me the perfect catalyst to turn her heel. My heel NXT Champion Roman Reigns got tired of his villainous Tribal Chief routine and asked if I could make him a good guy within three weeks. Knowing when to acquiesce and when to put my foot down and stay the course, despite a wrestler’s objections, is a tricky but fun exercise in being a promoter as well as an enjoyable power trip. When one lower-card wrestler got too big for his britches and demanded an absurd pay raise, I had no problem letting him walk. Unhappy superstars on rival shows may ask to be switched to your brand if you play your cards right.

A good show depends on several factors, and match placement is the biggest. Ideally, a strong opener and a good main event can overcome a dull middle section. However, a bad first match may cause viewers to change the channel even if the rest of the show is amazing. Mixing up match-types week to week by adding stipulations or run-ins also prevents your brand from becoming stale.

As I mentioned earlier, booking matches that please the audience largely depend on styles. Certain styles mesh better with each other and, in turn, have a better chance of producing higher-quality bouts. This is where my personal bias often had to take a backseat. To me, Bianca Belair vs Shayna Baszler is a great match-up, but their styles said otherwise and often led to mediocre fan reception. It’s not that “bad” pairings never produce a good result. But it is much harder, though a well-built rivalry can build interest and turn a lukewarm program into a white-hot feud.

Once a feud is initiated, superstars are immediately matched against each other when booking them (though you can change this), and their matches receive a rating boost since there’s more interest. Rivalries begin at Level 1 and blow off at Level 4. In true but unintentionally hilarious WWE fashion, making two feuding superstars constantly wrestle week-to-week seems to please fans despite that being a major criticism of the real product and goes against everything I personally stand for when it comes to rivalries. Thankfully, you can also build feuds through promos and keep the involved talent from touching each other until the big blowoff match. Whether or not either approach is more viable is unclear, but it satisfied my personal tastes if nothing else. Superstars can also feud with multiple people simultaneously, letting me seamlessly segue from one rivalry into the next. 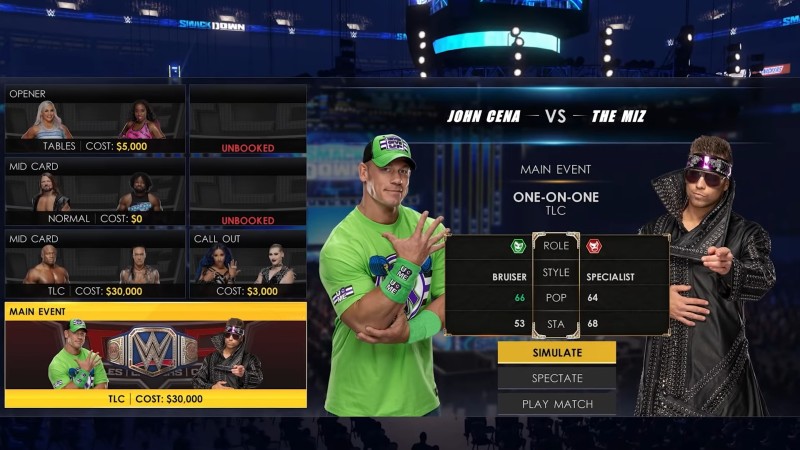 You can play booked matches yourself, thus directly determining the winner, or you can speed things along by simulating the results and book around the randomized outcomes. You can also spectate matches, a new option that allows players to watch the action from a production vantage point. This mode gives players the power to manipulate camera angles so you can present the match as dramatically as possible to boost its rating. Regardless of how you execute your card, a post-match summary gives a star rating along with a nifty breakdown detailing what elements of the action click and which don’t. You’ll also get a report detailing business statistics such as revenue gains/losses, new viewers, fan retention, along with a social media feed with viewer reactions to your show.

You can enhance your show’s perception by upgrading its presentation, too. By default, your show is held in a free high school gym with minimal bells and whistles, but you can eventually pay for bigger venues, more elaborate sets/pyro, larger production crews, and more comprehensive advertising campaigns. You have a budget, however, and holding WrestleMania-caliber events every week may boost ratings, but it isn’t cheap, so knowing when to cut corners and when to splurge (like on a pay-per-view premium live event) is important. That said, I found it annoying having to re-select these options for every show instead of having the format I previously chose carry over.

After 15 weeks, I built towards a critically acclaimed WrestleMania weekend show, but I narrowly lost the overall rating war to Raw. That’s okay because I had a pretty fun time with MyGM. It seems like it should scratch that management sim itch for its dedicated sect of fans, and I look forward to exploring the complete version when WWE 2K22 launches on March 18.