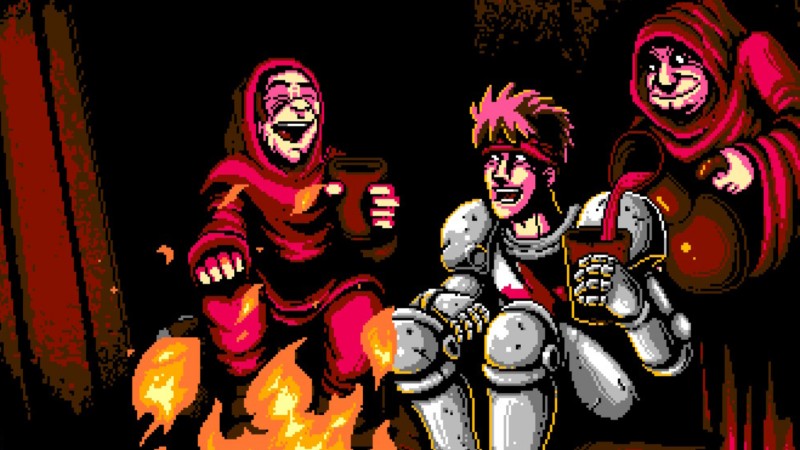 In the first 10 minutes of Infernax, I faced a choice to kill or spare someone who asked to die. I chose to kill them, and without a moment’s hesitation, my character’s mace crushed through their skull. Their face was mangled, with eyes popping out the sides, as the mace destroyed everything between their nose and the cowlick on the back of their head. It is a brutal introduction to the “kill or spare” choice system that presents itself a handful of times throughout Infernax, and it was only a taste of the carnage that’d soon color my crusader’s journey to defeat evil once and for all.

Infernax’s quick and beautiful prologue is reminiscent of Castlevania II: Simon’s Quest, which this game seems to be heavily inspired by. It plays right after you begin a new game, setting up what’s in store for you. Infernax is one part an homage to those retro games of old – sometimes to a fault if the punishing difficulty of the NES era is not something you enjoy – and another part Berzerk Studio’s crack at creating something new. For the most part, it expertly replicates those experiences that defined that era of games.

You begin Infernax as a crusader returning to your homeland, but you haven’t lost your urge to crusade. Towns like Darsov are overrun with mysterious monsters seemingly controlled by a devil-like figure. Pentagrams and other satanic relics and imagery are scattered about to remind you that these once holy lands are now infested with demons and other monstrous beings. But, Alcedor has the power of prayer and a bloody mace on his side. Over the next 10 hours, I’d defeat hundreds of monsters, decide the fate of evildoers and the unlucky, complete quests, and cheekily solve problems, all while attempting to track down and destroy five orbs that protect the big demonic baddie haunting the lands. Throughout it all, I was always intrigued by what was inside the next dungeon or what mischievous plan a mysterious citizen was up to. The combat alone was enough to keep me progressing forward, but the world that Berzerk built was just as interesting.

The game’s Castlevania II inspiration is present throughout Darsov and its neighboring areas, and Berzerk skillfully raises the stakes by using troubled citizens like cursed husbands or nightmare-ridden children to revel in the misery that drapes the land. From the start, I bought into Berzerk’s narrative that a devilish figure was bringing dark magic to this otherwise normal and holy place, and not once did it fall short of selling that premise.

Infernax features some light Metroid and Castlevania-style elements that bring new life, entrances, and secrets to places you’ve explored dozens of times. A previously unreachable house is a quick jump away after you gain an ability that drags you high into the sky. You can purchase a spell that makes teleporting from one shrine to the next a breeze, and you can purchase another that might be the key to discovering a sunken castle. On top of more subtle world changes like this, a constant day-and-night cycle keeps you on your toes. There are more enemies during the day, but they’re easier to kill than the battle-hardened ones that only appear at night.

I began Infernax with a simple weapon but quickly learned the Shield spell, which saved my life more than once by decreasing the amount of damage I’d take. When the credits rolled, I had multiple weapons, pieces of armor, potion flasks, and over half a dozen spells at my disposal. I found many of these indispensable, such as a potion that restored my mana, which in turn allowed me to use my Drain Life spell once more. This spell sucks health out of nearby enemies to restore my own, and it was essential in reaching the deepest depths of Infernax’s many dungeons. Watching my arsenal grow was great, but I was disappointed that weapons and armor didn’t really change my approach to combat in any way. When I purchased a new mace, it felt exactly the same as the one I was previously using – it just hits harder. When I first booted up Infernax and saw that I had four weapon slots, I was excited to see how different weapons might shake up the action. Sadly, the combat doesn’t evolve much over the course of the game, except for spells, which do greatly affect your approach to battles.

I primarily used spells that increased my health and buffed my defense, but more offensive magic, such as the ability to imbue my weapon with holy light that can be tossed at enemies from a distance, were clutch more than a few times.

Some spells aid in exploration, although I wish Infernax more clearly communicated when you need a spell to progress through certain areas. For example, you unlock an ability that allows your hero to shoot high into the air. Shortly after, you unlock an ability that allows you to dash either left or right through the air. More than once, I encountered a gap that looked like I needed to quickly dash right and then launch immediately upward using these two skills. However, I could never pull off this maneuver. Instead, I was missing a spell that summons a crow that could fly to a lever that reveals a bridge. I loved this spell and how it added to my ability to progress forward. Unfortunately, Infernax doesn’t always clearly telegraph which abilities you need to progress past certain obstacles, which lead to a few of these moments of frustration.

Annoyances like that are minor nitpicks, though, because across my 10 hours with Infernax, less than an hour was spent dealing with issues such as these. A few dungeon layouts are frustrating, and if you lose all of your lives, you’ll be sent right back to your last save. This meant that I constantly had to remember to save at the shrine right outside the dungeon before actually entering. Thankfully, Infernax’s difficulty feels fair, and I almost always felt that it was my fault that I died and not an element out of my control.

If you play on classic mode, you’re sent back to your last save point when you expend all of your lives. Because saving only happens manually, if you go an hour without saving, a few mistakes can cost you an entire hour of progress. Of course, you can switch off of classic at any time to play in the casual mode, which saves some of your money and experience when you reach game over. I stuck with Classic for my entire journey, even with the annoying progression resets. I appreciated that Casual mode was a little more accessible, but unfortunately, once you switch over to Casual you can no longer switch back to Classic, which is a bummer because for the most part, I enjoyed the challenge of Classic.

My time with Infernax was colored by wonderful “ahh ha!” moments of discovery, a challenging gameplay loop, unique bosses, and plenty of gorgeous 8-bit blood and guts. I only hope that a sequel (which I’d love to see happen) cleans up and tweaks some of the smaller frustrations that tainted this otherwise fun and retro romp.

From the moment you step onto these demon-infested lands to the moment you deal the killing blow to the game’s final boss, you’ll experience plenty of surprises – the Konami Code does something really cool, for example. Infernax’s retro soundtrack that rips from start to finish, beautiful art, challenging gameplay, and a fun Castlevania-inspired design, make it worth the price of admission.

This review pertains to the Switch version of Infernax. The game is also available on PlayStation 5, Xbox Series X/S, PlayStation 4, Xbox One, and PC.