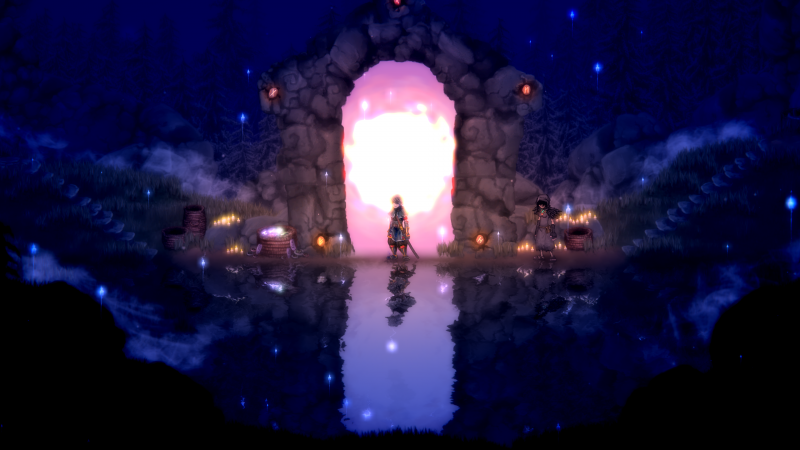 PlayStation’s Twitter is having a whole morning of indie announcements, and Devoured Studios’ newest game Salt and Sacrifice joined the party with a PS Blog post about its PvP and a sneaky announcement of its release date on May 10.

Like its predecessor and From Software’s Souls games it’s heavily inspired by, Salt and Sacrifice will give players the option to invade others’ worlds and impede their progress through PvP battles. As an Inquisitor, your charge is to rid the world of mages who have succumbed to and have become agents of chaos. Depending on the factions you’ll choose throughout the adventure, such as the overzealous Shroud Alliance, you may be aiming for direct combat with players.

Those who take the oath of the Blueheart Runners will invade for a very different reason. Bluehearts are tasked with hunting down “haze-tainted creatures” that spawn even more dangerous monsters from rifts, making life even more hellish to the player who calls that gameworld home. Because of this, Salt and Sacrifice director James Silve highly recommends getting rid of these troublesome invaders posthaste.

Silva made it clear PvP won’t be a necessity during Salt and Sacrifice, saying, “we know a significant number of players have less-than-zero interest in PvP. It is super fun, but is also certainly not for everyone, and we respect that.” And it really does sound fun, especially with the improvements to mobility and combat that look to make for more dynamic PvP encounters. Inquisitors will have tools like grappling hooks to zip and flip around the environment or negate nasty falls and knockdowns. Sprinting and sprinting attacks along with spell-like Runic Arts will also diversify the threats at your and your opponent’s disposal.

Salt and Sacrifice will be available on PlayStation 5, PlayStation 4, and PC on May 10. For more Soulslike goodness, we’ve made our Elden Ring cover story available for free.