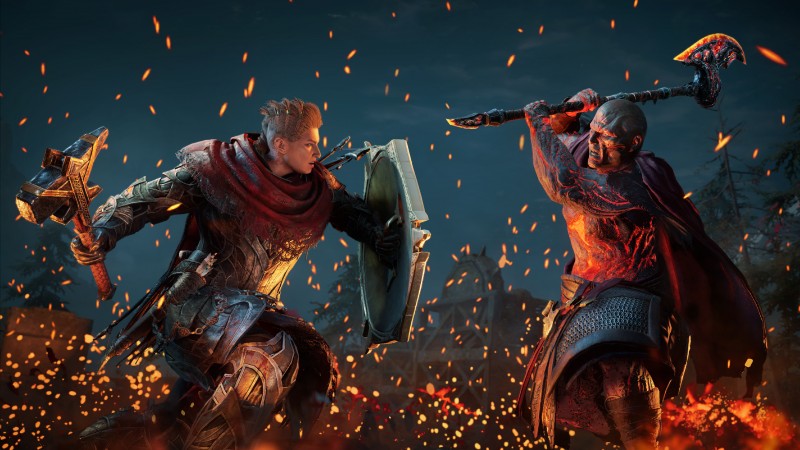 We got the first few details of Assassin’s Creed Valhalla: Dawn of Ragnarok a couple of months ago alongside news of the game’s Odyssey crossover. The sprawling, 35-hour long expansion follows Eivor, in the guise of Odin, through the dwarven realm Svartalfheim, which has recently been invaded. Battling through the magma-infused Muspels and ice-encrusted Jotnar, Odin seeks to defeat the fire giant Surtr to save the kidnapped god Baldr.

With one month left until Dawn of Ragnarok is set to release, we got a hands-off look at the expansion. The distinctively mythological adventure aims to be a unique experience. “The expansion will refresh the experience of the main game and will expand the Viking fantasy going deep into the Norse mythology,” says producer Mariana Gosteva. Hopefully, this will give fans of the nearly two-year-old game a reason to pick up the controller again. 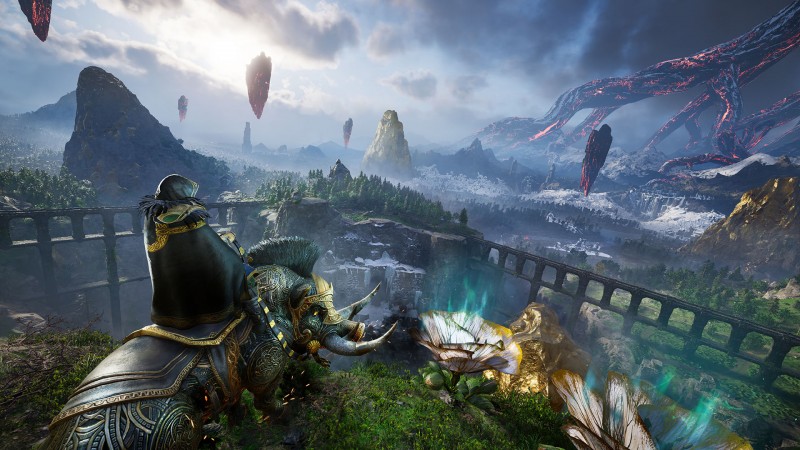 In our preview, we started, fittingly, with a leap of faith from the top of a massive, dwarven statue. The green landscape below looked deceptively ordinary until the camera panned up at a mountain laced with gold. Behind it is a sky brimming with the branches of Yggdrasil. The player can choose to make Odin male or female in Dawn of Ragnarok, but no matter your decision, Odin doesn’t have much time for exploration. The Jotnar and Muspel have already spread across Svartalfheim.

A new boar mount appears, decorated with a complicated web of Norse patterns, ready to take the god to a nearby Shelter. Filled with Dwarves seeking refuge from invading forces, Shelters dot the map, acting as a hub for players looking to shop, upgrade their gear, or pick up quests. Among these upgradable items is the Hugr-Rip, a powerful piece of equipment specific to this expansion that allows Odin to take on Powers from various enemies. 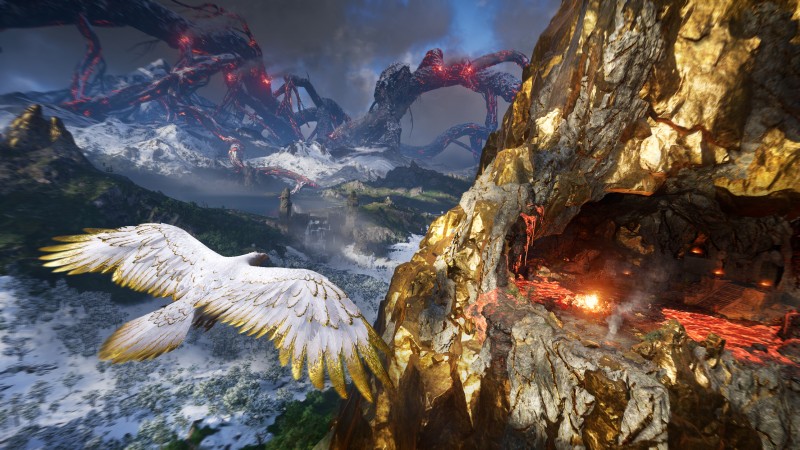 Separate and more impressive than Skills or Abilities, the five Powers in Dawn of Ragnarok allow Odin to perform otherworldly feats. To activate these Powers, you have to build up a special bar by gathering Hugr. One interesting way to do this is to stop at a Shrine of Yggdrasil, sacrificing a hefty amount of Odin’s health to the world tree in return for the needed energy. In the preview, we first see these Powers in action while Odin searches the city of Uldar – a Dwarven mining city now overrun by Muspels.

Uldar sits nestled up to a mountainside glittering with gold and has one main entrance preceded by a long bridge. To avoid being spotted by defending enemies, Odin kills a large bird, grabbing the Power of the Raven from it. This lets the god take the creature’s form and fly over the unsuspecting town, but you can’t fly forever. Powers only last for so long, as shown by a timer in the bottom right, so be careful time doesn’t run out as you’re soaring through the sky. 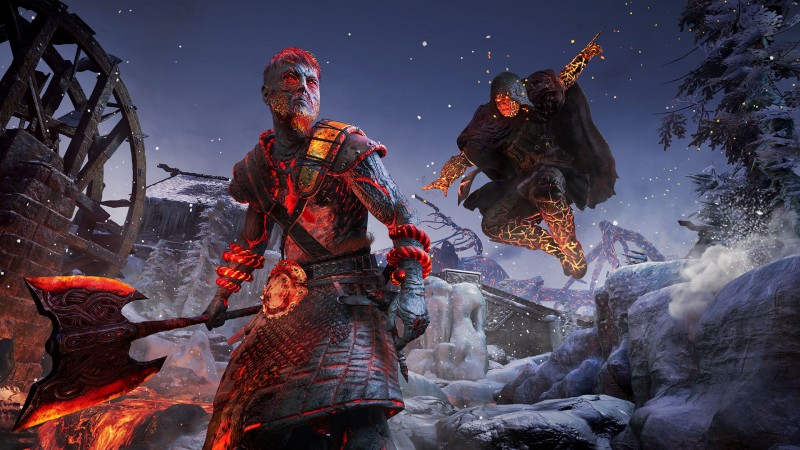 There’s also a strategic element to acquiring these Powers. Though you can pick Powers up from most foes scattered throughout levels, Odin can only hold two at a time. As the preview continues, we see Odin find the Power of Muspelheim, which allows players to transform into a fiery Muspel. In this form, Muspels won’t attack you. Hostile creatures will stop fighting if you transform mid-fight, and you can also walk on lava. However, an enemy soon appears in the demo with the Power of Rebirth, which reanimates defeated foes to fight for you. Because Odin already has the Power of the Raven and the Power of Muspelheim, the player has to choose which Power to keep. So, the question becomes: Do you want a temporary undead army, the ability to fly, or lava-walking?

Fighting the city’s hordes also offers us a chance to check out a new weapon and enemy type. Fans that dive into Dawn of Ragnarok will be able to add an Atgeir, a vicious-looking, two-handed weapon, to their arsenal. This comes in handy against otherworldly opponents, like the Flame-Keepers in the Muspel ranks. This formidable new foe has the vexing ability to resurrect defeated enemies, summon an ever-flowing stream of exploding minions, and take a meaty chunk out of you in melee combat. 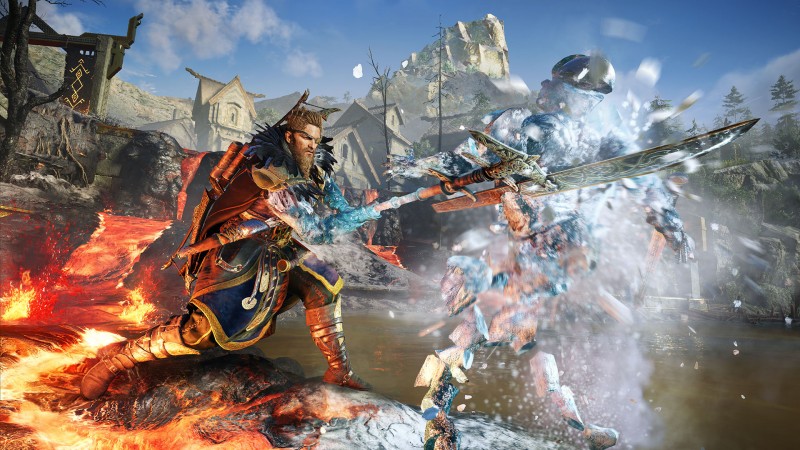 As a special part of the demo, Game Informer got a glimpse of Dawn of Ragnarok’s Valkyrie Arena. Its narrative conceit is interesting. Each fight is framed as a reenactment of one of Odin’s heroic battles. A tale played out in combat performed for the Valkyrie Kára and the warriors of Valhalla to inspire them to train hard for Ragnarok. And, like in any good story, the player has the option to sprinkle a few boasts into the mix. That means, mechanically speaking, players entering the arena can choose to apply different challenges to the fight.

For instance, we saw a boast called Ability Trade-Off, which makes foes’ attacks stronger after you’ve used an Ability, and another called Enemy Stun Resistance. While we only saw two in the demo, you can apply up to 14 boasts per combat. Picking different boasts for each fight not only varies your encounters but also impresses the Valkyrie more, resulting in a bigger reward.

“Players can spend the Tokens of Kára at her shop,” explains Gosteva. “There, they can acquire new gear and weapons, as well as awesome new cosmetic items. They will also be able to purchase some of the new Odin runes, as well as upgrade materials.” 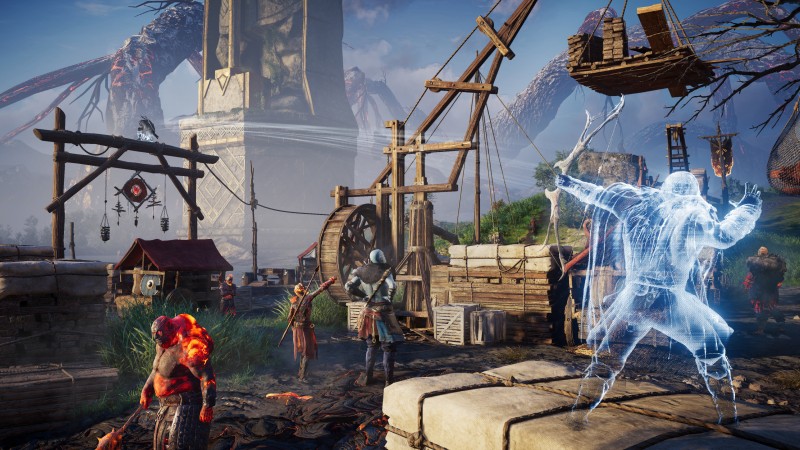 But Dawn of Ragnarok isn’t all about fighting; the preview event also showed off the game’s exploration elements. This included some of the locations of big quests, like Hreidmar Palace, where Glod, the son of the giant Surtr, dwells. However, getting there proved challenging, as the palace towers above the landscape on a rock so tall it dwarfs the surrounding mountains. The Power of the Raven was especially helpful here. But side content was also filled with exploration opportunities, including puzzles with tempting rewards.

We saw, for example, Hreidmar’s Groft, an underground cave filled with fire and ice which hides an armor piece. The team showed off the fourth and final Power of the demo here, called Power of Jotunheim. Like Power of Muspelheim, it transforms you into a mythical creature, but this time a frost giant. The Power also includes the ability to teleport. You can move short distances by dodging or rolling, but you can also move longer distances if you shoot an arrow at World Knots. By using the Power of Jotunheim and Muspelheim back and forth, you’ll be able to delve into the heart of the cave. Here, waiting in a locked chest, is a piece of the Dwarven Blacksmith armor set, one of five new sets coming in the expansion. 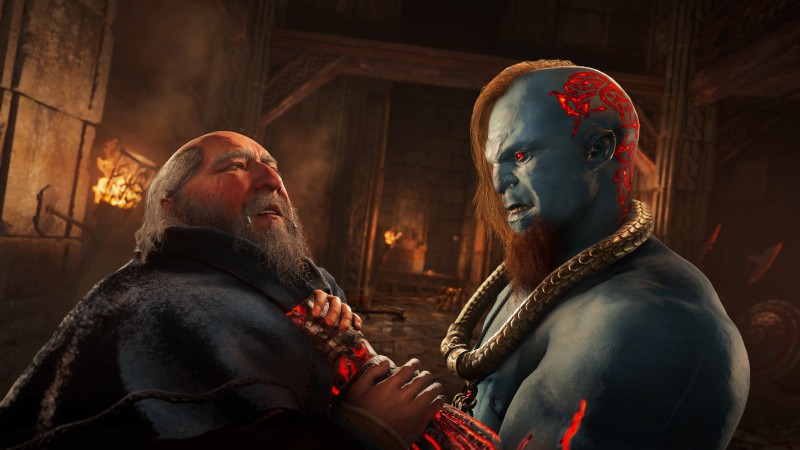 Assassin’s Creed Valhalla: Dawn of Ragnarok releases March 10 on PlayStation and Xbox consoles, as well as Stadia, PC, and Amazon Luna. You can start the $40 expansion by heading to the seer in Ravensthorpe, and while the team recommends players reach power level 340 for the adventure, don’t worry. If you’re new to the game or don’t want to wait to jump in, under-powered players will get a boost when they enter the Dwarven realm.