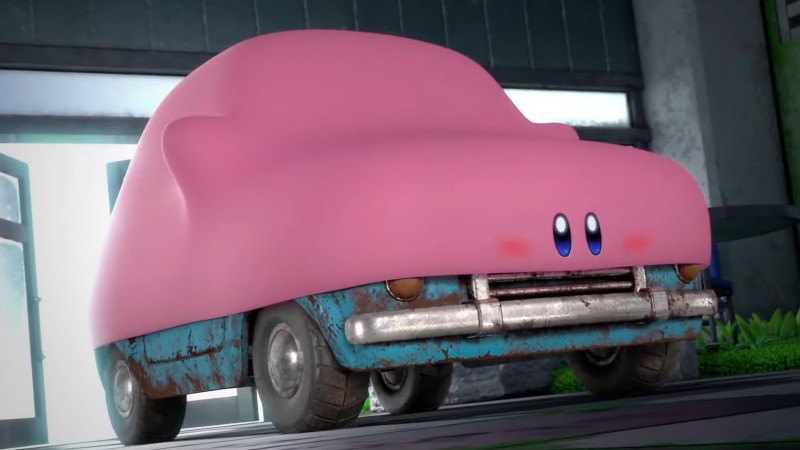 Kirby and the Forgotten Land is coming on March 25. In today’s trailer shown during the latest Nintendo Direct, we got a new look at some of Kirby’s abilities in the game.

As you’d expect, they involve him sucking items up and transforming based on what he swallowed. This ability is known as Kirby’s Mouthful Mode, and when he sucks up something like a car, for example, Car Mouth is activated. In Car Mode, Kirby can race around the level, ramming through any enemies in his way.

The trailer revealed many other mouth forms like Vending Mouth, which sees Kirby suck up a vending machine that allows him to shoot juice cans at enemies, Cone Mouth, which lets him spike down on something after sucking up a cone, and more. There’s also Scissor-lift Mouth, Ring Mouth, Light-Bulb Mouth, Arch Mouth, and even Water-Balloon Mouth.

That’s not everything shown in the trailer, though. We got a look at Waddle Dee Town, which is where Waddle Dee lives and home to Waddle Dee’s Weapon Shop. Here, you can purchase items and evolutions like the Cutter and Chakram Cutter, Volcano Fire, Clutter Needle, Gigant Sword, Noble Ranger, Frosty Ice, and Toy Hammer. You’ll need all of these and more to successfully make your way through Kirby’s latest adventure in Kirby and the Forgotten Land.

Fortunately, you don’t have to wait much longer to play this game because it hits Switch on March 25. While waiting for that, read about why Kirby and the Forgotten Land might be the cutest post-apocalypse ever, and then watch this trailer released last month that showcases Kirby’s copy abilities and the game’s co-op mode. Read about how Nintendo has plans to celebrate Kirby’s 30th anniversary in other ways this year after that.

Source: Game Informer New Kirby And The Forgotten Land Trailer Reveals Mouthful Mode Where You Can Suck Up A Car