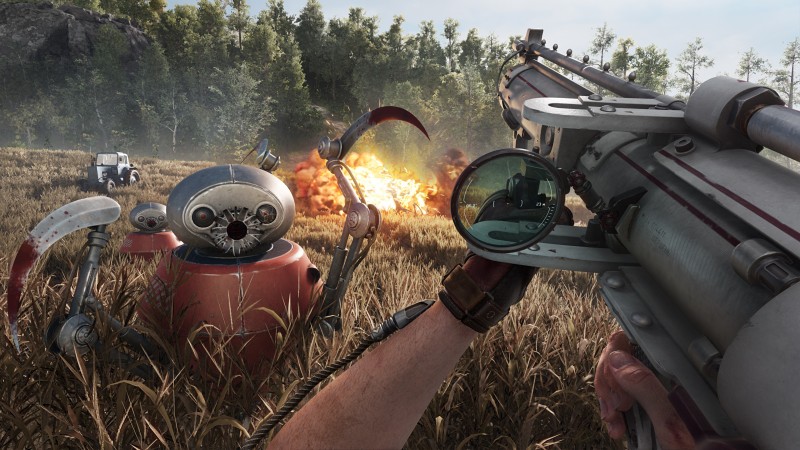 Mundfish’s Atomic Heart has been making the rounds in gaming forums since early footage was first showcased in 2018. A retro-futuristic take on 1950s Soviet Russia, the world of Atomic Heart is infested with rampaging automatons, wooly man-bear-things(?), gelatinous horrors, and much more. IGN premiered a brand new trailer with an assortment of story beats, English localization, and a surprise Fall 2022 release window. You can watch the new gameplay/cinematics below.

While the central narrative is still unclear, some interesting mechanics can be gleaned. Protagonist P-3, a KGB agent, is equipped with a glove that completely levels the playing field. Players can expect to use telekinesis to launch adversaries or weaponize environmental objects as well as freeze assailants mid-action (1:43 time mark). A plethora of zany weapons reminiscent of Dying Light 2’s modded melee armaments and Far Cry 6’s repurposed guns fill the battlefields with fiery explosions and mists of blood. Moreover, a few seconds of skill-tree footage revealed Atomic Heart’s deep RPG-inspired progression system. The first-person action is intentionally discombobulating to emphasize the game’s horror motifs – despite having an assortment of mind-bending powers, agent P-3 is entirely out of his depth.

Mick Gordon, the musical mind behind 2016’s Doom, brings his talents to Atomic Heart’s heart-pumping score. Guttural guitar licks and whirring synths bring the laboratories, grasslands, and theme parks of Mundfish’s open-world thriller to life. As for plot details, Atomic Heart’s developers told IGN,” ‘Atomic Heart’ has several meanings, and it’s not only the machine core. It’s not only about the scientific leap. It’s also about the competition between the USSR and the United States at that time. But we won’t say anything more than that for now!”

Atomic Heart is slated to release during Fall 2022 for PlayStation 5, Xbox Series X/S, PlayStation 4, Xbox One, PC. Xbox fans, rejoice because it’ll be a day one Game Pass addition.