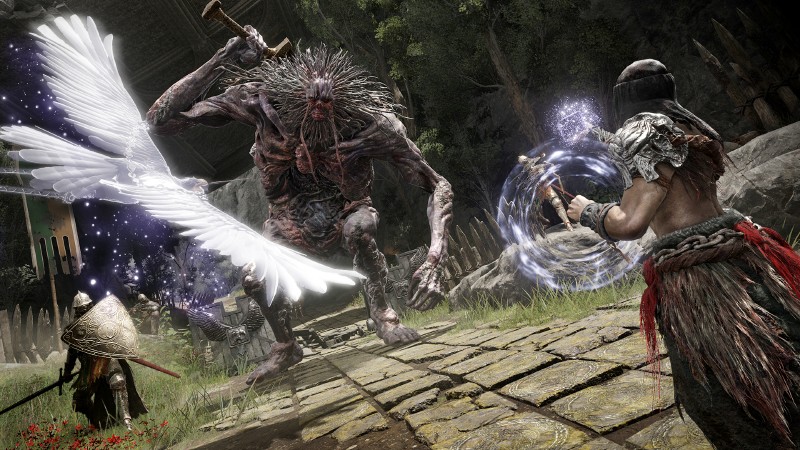 Elden Ring is right around the corner, due out on February 25, and if Game Informer editor Dan Tack’s latest preview with the From Software title is any indication, we’re in for a treat.

Last month, famed author George R.R. Martin, who collaborated with From Software to create the foundation and lore of Elden Ring, wrote that the game looks “incredible” in a blog post. Thanks to a new Edge Magazine interview with Elden Ring director Hidetaka Miyazaki, it seems the recent Bluepoint Games remake of Demon’s Souls on PlayStation 5 helped make From’s latest look great.

“Yes, I’m pretty sure our graphics-creation staff felt that pressure more than anyone else,” Miyazaki told Edge, as reported by Video Games Chronicle, when asked if Demon’s Souls’ visuals added any pressure to the Elden Ring team. “And not just with Elden Ring, but with all the games we make. Graphical fidelity is not something we put as the top priority. What we ask for on the graphics side depends on the systems and requirements of the game itself, and it takes less priority compared to the other elements of development.”

Miyazaki continued, stating that graphics is “always an area where I feel a little bit apologetic towards my graphics team because I know they work extremely hard.”

“[They’ve] worked extremely hard on Elden Ring – our graphics-systems team and our programmers have been pushing a lot of new features to create the best-looking games we’ve ever made,” Miyazaki said.

Speaking further on the topic of the Demon’s Souls remake on PS5, Miyazaki admitted that he actually hasn’t played it. He said he doesn’t like to revisit games he’s worked on.

“As you say, I was not directly involved in it [Bluepoint Games developed the remake for Sony] and I haven’t actually played the Demon’s Souls remake, but this is because I just don’t enjoy playing the games that I’ve made in the past,” he told Edge, according to VGC. “It brings up a lot of old emotions, a lot of old memories, and this gets a little bit overwhelming, and it doesn’t feel like playing anymore. So I have not played the Demon’s remake, but I am very glad to see it get this fresh look, these brand-new current-gen graphics.”

“It was a rough game back in the day with a relatively rough development so I was anxious that new players would not enjoy it in that same way,” he said. “That was a cause of concern for me when it was re-released but, you know, in the end, I’m just happy to see the reaction and happy to see people playing it.”

For more about Elden Ring while waiting for its release next month, check out the latest trailer that features plenty of mystery and then watch this 30-minute New Gameplay Today segment with gameplay from one of Elden Ring’s opening areas. Read about the official Elden Ring resolution and performance priority modes after that.

Are you excited about Elden Ring? Let us know in the comments below!