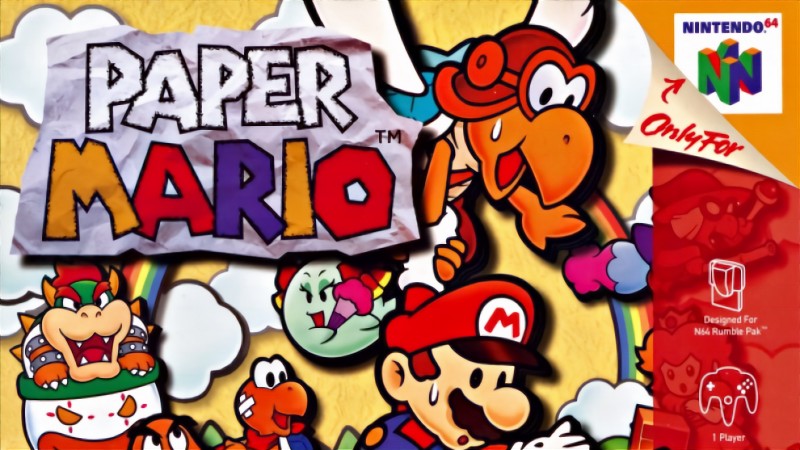 Nintendo has revealed that Paper Mario is joining the Nintendo Switch Online catalogue next week.

Revealed on Twitter, the company released a trailer for the Nintendo 64 game, sharing that it will join the Switch’s online games service next week on December 10. However, because it’s an N64 game, not all Online users will have access to it as you must be subscribed to the Expansion Pack version of the service to play it.

“Adventure through the Mushroom Kingdom to save Princess Peach from Bowser’s clutches as a paper-thin version of Mario,” Nintendo’s tweet reads. “Paper Mario unfolds on Nintendo Switch for Nintendo Switch Online + Expansion Pack members on 12/10.”

Originally released in 2000 on the N64, Paper Mario was a Mario-centric spin-off experiment developed by the company. Opting to drop the more classic platforming elements of the standard Super Mario series, Paper Mario instead took our favorite plumber and his friends on an RPG-like adventure, complete with turn-based combat. Its popularity quickly grew from there and today, the Paper Mario series has multiple entries in it.

Here’s Nintendo’s official description for Paper Mario: “After Bowser steals the Star Rod and kidnaps Princess Peach, Mario plots to rescue the seven Star Spirits and free the Mushroom Kingdom from the Koopa’s rule. As Mario travels from the tropical jungles of Lavalava Island to the frosty heights of Shiver Mountain, he’ll need all the help he can get. Master the abilities of the seven Star Spirits and the other allies joining the adventure to aid our hero on the battlefield.”

As noted above, you must be subscribed to Nintendo Switch Online + Expansion Pack, which was revealed back in October. It’s a new tier of service that includes N64 and Sega Genesis games. An individual membership of this new tier costs $49.99 while a family membership costs $79.99. If you’re already a standard Nintendo Switch Online subscriber, Nintendo will give you a prorated cost that takes into account the months you’ve already paid for if you wish to upgrade to the Expansion Pack.

Are you excited about Paper Mario joining the Nintendo Switch Online lineup? Let us know in the comments below!