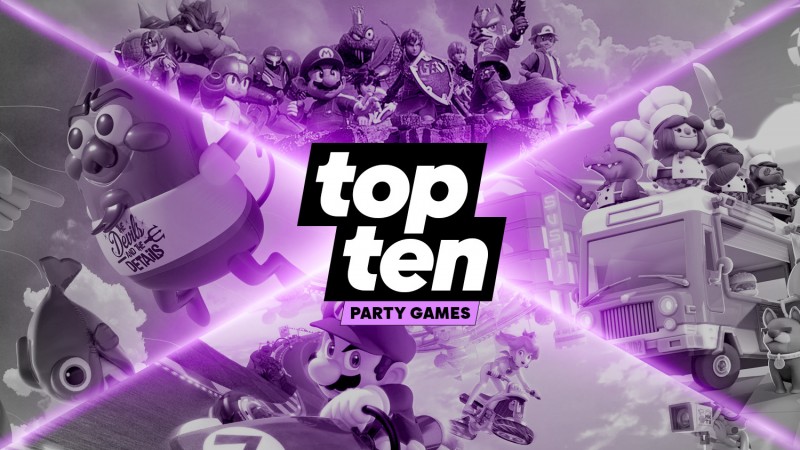 Party games can provide some of the best experiences in all of gaming. They force players to group up and work together toward a common goal, which can be very rewarding. Not all of them do that, though – some party games will test the bonds of friends greatly, be it on a Mario Party battlefield, an Overcooked kitchen, or somewhere else entirely. Regardless of the objective, playing games with friends is always fun and when developers specifically hone in on that camaraderie, the result can be a great game that makes an appearance at any and every social gathering.

This list highlights some of our personal faves. Here are 10 great party games, listed in no particular order, that are sure to bring cheers, laughs, screams, and more to any event. 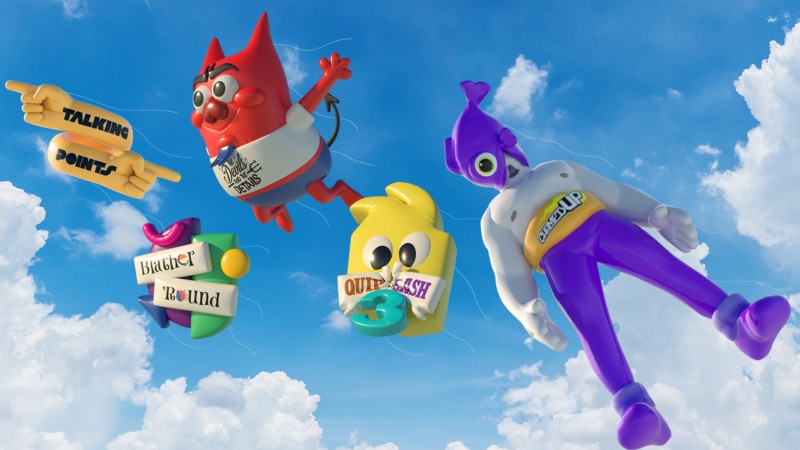 Jackbox Games has been making excellent party game collections for years and one of its latest, The Jackbox Party Pack 7, is one of the studio’s best. Much like previous packs, this one features five games: Quiplash 3, The Devils and the Details, Champ’d Up, Talking Points, and Blather Round. At $29.99 for the entire collection, getting five excellent party games in this is a win unto itself. It doesn’t hurt that the included games are a lot of fun, too.

Quiplash will have you and up to seven other players proving your wit and humor in front of everyone, which is always successful in a party setting. The Devils and the Details is pure chaos and who doesn’t love that? Champ’d Up is perfect for those looking to get competitive. Talking Points turns everyone into the world’s worst PowerPoint presenter – sounds terrible and amazing, right? – and the final game, Blather Round is a hilarious take on MadGab. At least one of these is sure to be a hit at your next social gathering. 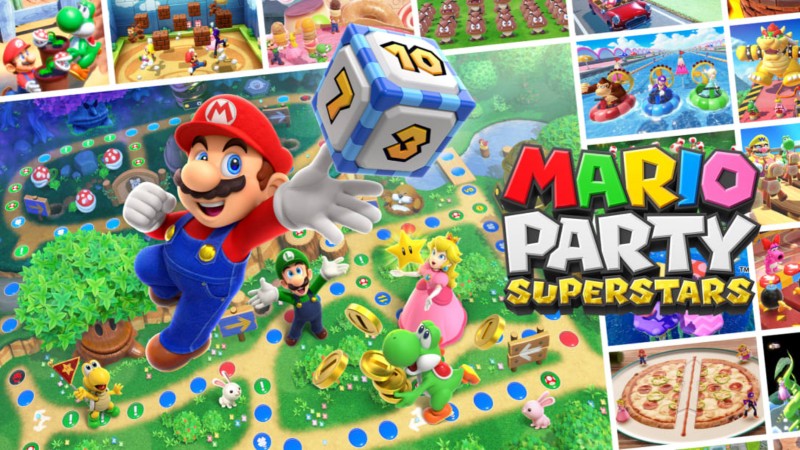 Mario Party has been an excellent party addition for decades – it’s right there in the title – and Superstars is the latest release in the franchise; a greatest hits collection of the best boards and minigames from the series. If you’re a longtime fan, your favorites are surely in it. If it’s your first Mario Party, then you get to play some of the best the series has to offer.

Anyone that’s played Mario Party before knows how successful it can be at a party. It’s basically Nintendo’s take on pure chaos veiled with the bright colors, fun music, and familiar characters of a board game based on its Mario franchise. Mario, Luigi, Bowser, Peach, and the like, pull you in and then the board games put your best friendships to the test. Do you go on the offense and completely screw up your friends’ plan? Do you play the long con and quietly collect the most coins for a bonus star at the end? Or do you win because for whatever reason, Mario Party Superstars decided to give you two random stars that put you in first place (although a new skill-based filter can remove the more random elements if you’d prefer)? The choice is yours. | Our Review 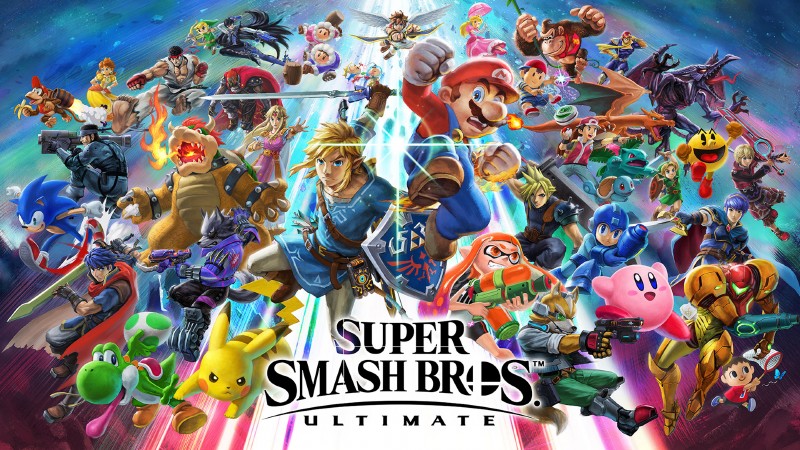 If you’re looking for something a little more competitive at a social gathering, Super Smash Bros. Ultimate is a must. Due to its reliance on skill versus the pure luck seen in others on this list like Mario Party Superstars, Ultimate is perfect for those looking to gain some bragging rights with a win. It’s the classic Smash Bros. formula distilled into arguably its greatest essence with the most stages of any game in the series and easily the most fighters to choose from.

What makes it especially ideal for a party is that it features characters even your friends who don’t play games will recognize like Mario, Pikachu, and Sonic. It also features video game icons like Cloud from Final Fantasy 7, or DLC characters such as Sora from Kingdom Hearts and Banjo and Kazooie. Plus, it’s a great fighter. If your party guests can mash buttons frenetically, they’re going to have a great time. | Our Review 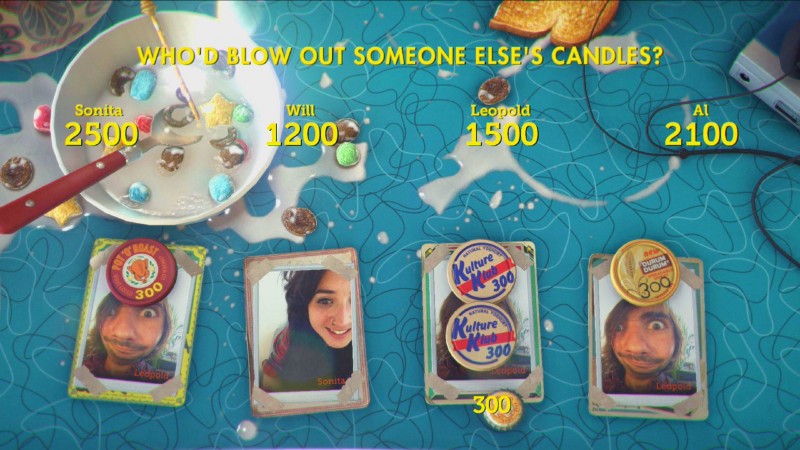 That’s You is a great party game for players that really know each other, though perhaps not the best option for a living room of near strangers. That’s because it relies heavily on what you know about a person. One round might have you drawing their ideal final meal while another will have you deciding who would do what on a camping trip.

It’s a great time because it rewards not just those who know their friends best, but those who can identify the funniest quirks and personality traits of themselves and those around them. Plus, it’s extremely accessible. All you need is a mobile phone to play because once the game is loaded up on a PlayStation 4 or PlayStation 5 console, it’s played entirely via said mobile device. 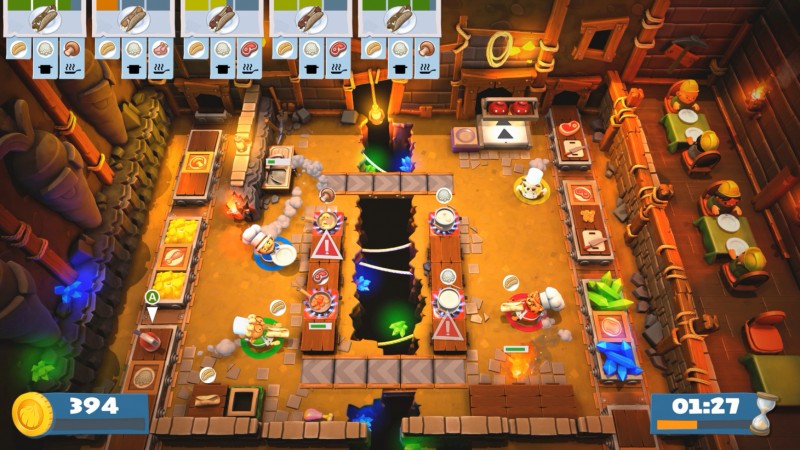 If you’ve ever been at a party and thought to yourself, “Wow, what if this was 10 times more stressful?,” then Overcooked 2 is the game you need in your life. Team17 and Ghost Town Games have gamified the stress of working in a hot kitchen excellently and the unique art style and score only elevates that feeling. You and three others cooperate in wacky kitchens where you must prepare ingredients, cook food, and plate dishes at the same time – all while doing your best to keep something from catching fire.

From the moment a round starts to its (usually sweaty) ending, your heartbeat won’t dip. In fact, it’ll rise with the frequency of curse words escaping your mouth. All of that makes Overcooked 2 a great time for those not even playing, because the tangible stress of every in-game cook is almost as fun to watch as it is to play. | Our Review 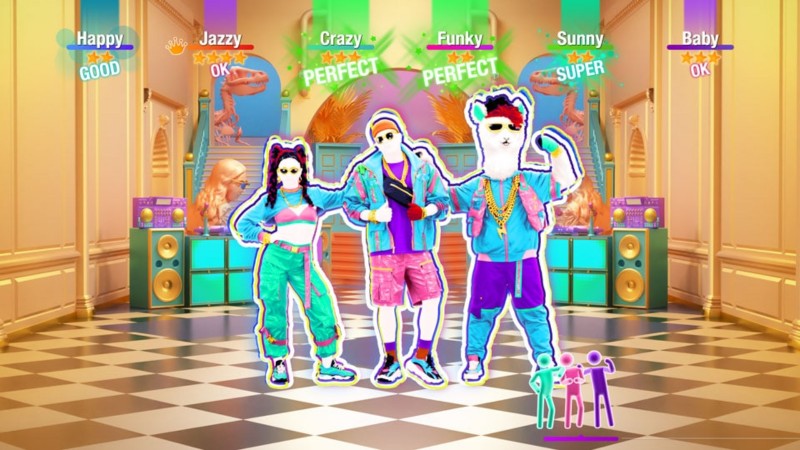 “What party doth be a party without thy divine tunes?” is something Shakespeare once said (probably) and he was very right: you can’t have a party without some music and if there’s music, someone has to be dancing. What better way to ensure that happens than by playing a game where all you do is dance. Just Dance 2022 is the latest collection of dance moves and musical hits from Ubisoft and much like its predecessors, its only focus is to get bodies moving.

What makes Just Dance 2022 a great choice for a party is that it removes the stress of not knowing how to dance and shows you exactly what you need to do on-screen. Stacked with a great tracklist, Just Dance 2022 makes something that can be nerve-wracking much more approachable and the dance moves your friends will try to pull off will make for great stories to be told for years. 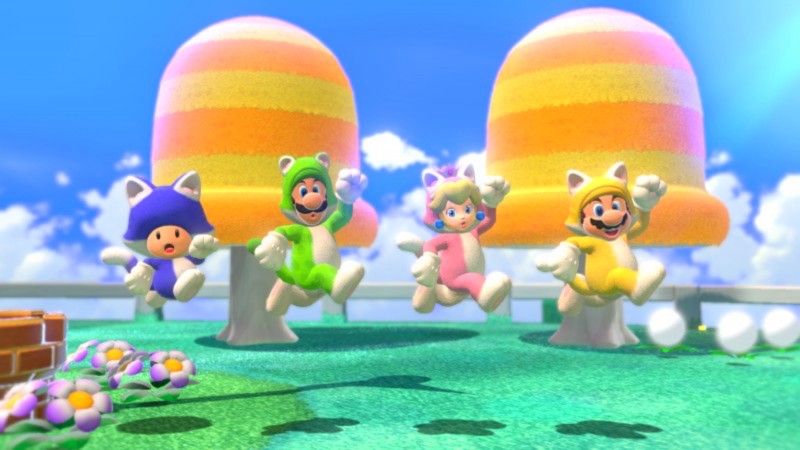 Bowser’s Fury is a new addition to 2013’s Super Mario 3D World included with the Switch re-release. It’s a great open-world take on 3D Mario, but it only supports two players at a time so maybe save it for the afterparty. Super Mario 3D World, however, supports four players and it’s perfect for a social gathering. Not only is it one of the best 3D iterations of everyone’s favorite plumber, but the four-player multiplayer makes for a fun and chaotic time.

If you’re chasing its hundreds of collectibles, having three extra players can make grabbing some of the more headache-inducing ones a breeze. If you’re after an experience that’s fun for both players and others watching alike, then turn each level into a race to the finish and watch as the Mushroom Kingdom becomes a world filled with curses, betrayals, and more. | Our Review 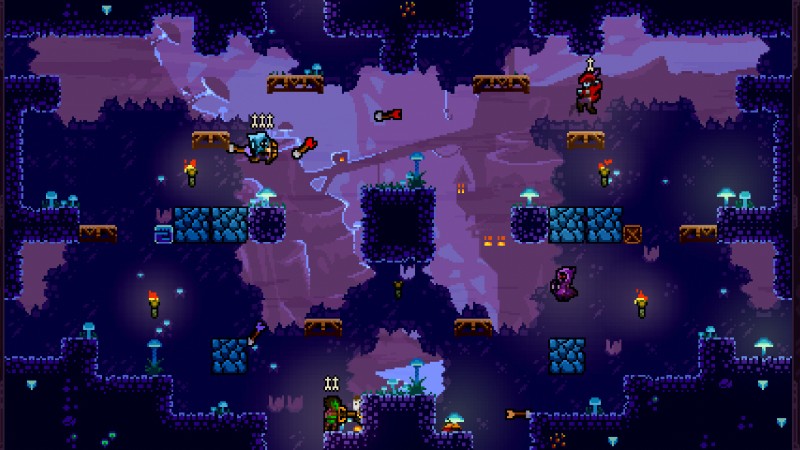 Towerfall is a must-have for any social gathering. For starters, it supports eight players if you have it on Switch – leave no friend out of the action with this title – and it also features a gorgeous pixelated art style with a score that’s equally as great. Then there’s the actual gameplay: fast, fun, competitive, and the perfect balance between “you need some skill to win” and “press buttons and you’ll be okay.” You and other players will take on the roles of archers who are tasked with shooting the opposing players. It’s a simple concept but that makes it perfect for the type of drop-in and drop-out gameplay usually experienced at parties.

Once you have the basics down, Towerfall really opens up as a party game because you and your teammates can start strategizing to take down the other team with ease. The different stages keep the gameplay exciting and fresh, too, so your party can play for hours without the experience getting old. | Our Review 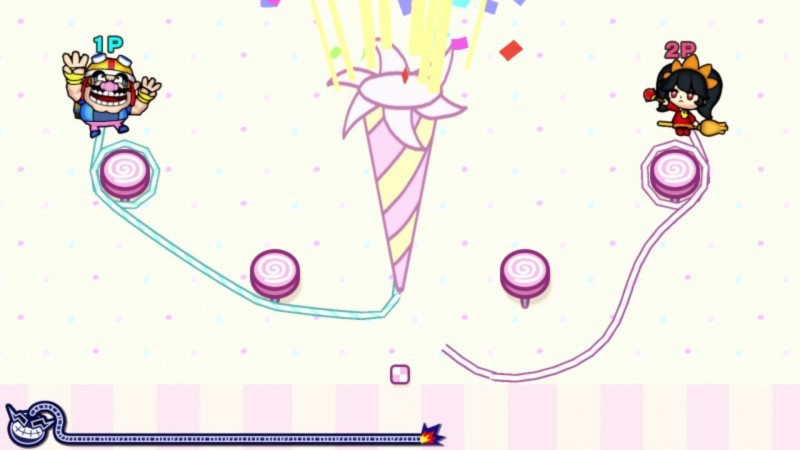 WarioWare: Get It Together!

WarioWare: Get It Together is like the younger, weirder brother of Mario Party, and it’s all the better for it. Bucking the look and feel of Mario Party for something somehow even more chaotic, and certainly more zany, Get It Together is the latest iteration of the WarioWare series that has prided itself on microgames (see: games even shorter than minigames). These include booger picking, looting hidden treasures, cleaning out Wario’s stomach, and more.

In Get It Together, you get another great collection of microgames and while some are better than others, each is so short that you’ll forget the games you disliked as you’re tossed into the next. Each microgame only uses a few buttons so even non-gamers can pick it up with ease. Plus, it’s the first in the series to include co-op games so if you’re not looking for something competitive, you’re covered. If you want to keep guests surprised and delighted every 30 seconds, Get It Together is an excellent addition to your party game lineup. | Our Review 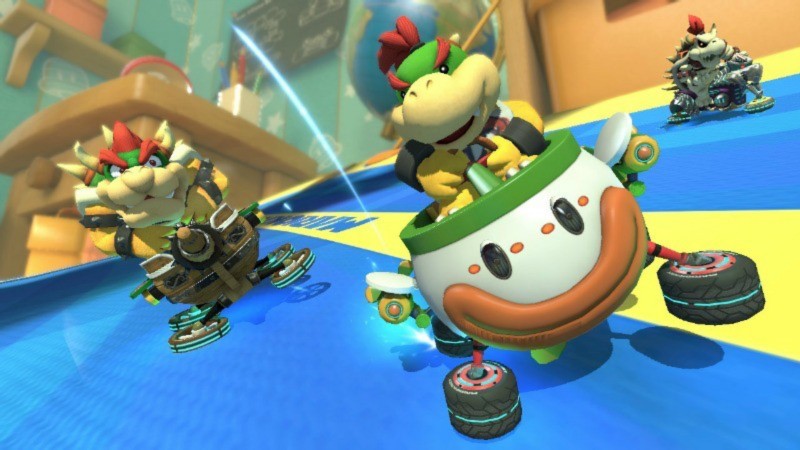 Did you really think this list wasn’t going to mention Mario Kart at some point? Even your friends who have barely touched a controller will ask about Mario Kart if someone mentions party games. It’s a tried and true classic, and Mario Kart 8 Deluxe is perhaps the best iteration of it. Featuring more tracks and racers than any before in the franchise, Deluxe is one of if not the best kart racer of all time.

It boasts classic characters you know and love, fantastic gameplay, an incredible jazz-centric soundtrack, and all the blue shell frustration one needs to keep a party entertained for hours. Anyone with a basic understanding of driving can find enjoyment in Deluxe, but as they become increasingly comfortable with its mechanics, what was once a simple and fun kart racer becomes a sweaty palms-inducing experience. | Our Review

What games on this list do you enjoy? What games would you add that aren’t currently listed? Let us know in the comments below and if you enjoyed this list, be sure to check out our other recent genre lists below.