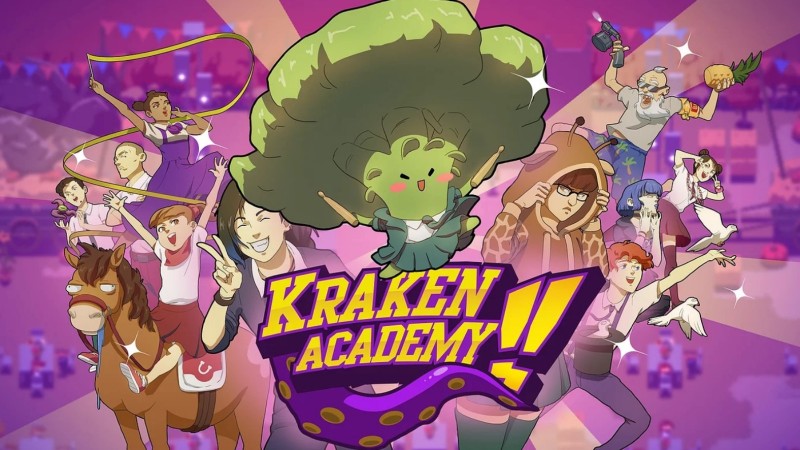 I’m dropped off at Kraken Academy, a dump of a school that apparently looks much better in the brochures. I endure words of discouragement from my cruel older sister before she runs off to join the upscale drama club. I barely have time to soak in my crappy surroundings when an angry student chases a crazy hobo. The two engage in a cartoon-style brawl complete with a comedic dust cloud. The fight is so intense that a nearby car randomly combusts into flames, Simpson’s style. Before I can see the winner of this impromptu scuffle, a small broccoli girl, as in a sentient female vegetable, runs up to whisk me away before I’m late for my first day of school. My thought after this rapid series of unorthodox events: “I have no idea what I’m getting into, but I must see more of it.”

I’m a few hours into my stay at Kraken Academy and it’s a trip so far. In my time with the story-driven relationship-building game I’ve joined a demonic cult, brushed shoulders with the mafia, and crashed a costume party of bikers and less-committal furries. Everyone you meet is an odd duck in some form or fashion but the strangest (and biggest) is a giant talking octopus who fills you in on a prophecy: in three days, an unknown student or faculty member will trigger a calamity that will destroy the school. The only way to figure out the culprit is to talk to everyone, befriending and understanding their schedules, personalities, and what makes them tick. You’ll also have to free the trapped guardian spirits of each of the school’s four clubs. The Kraken gives you a special amulet that allows you to reverse time back to the first day. That way, you can keep digging for info while retaining the knowledge and items gained in previous runs.

I’m having a great time interacting with my goofy peers, who include a giraffe-loving Velma doppelganger, a wacky conspiracy nut, a lazy, sleep-obsessed teacher, of course, good old Broccoli Girl. The sharp writing has made me laugh out loud on more than one occasion, and I’m enjoying getting to know these weirdos through sidequests and even dates. It’s good that the writing holds up because Kraken Academy is big on chatting and lighter on interaction. Moment-to-moment gameplay involves roaming around the rundown campus and smashing objects with a bat to collect bottles, which are traded for currency. It’s a simple but satisfying feature; breaking stuff is inherently fun, after all.

All other major interactions, at least from what I’ve seen so far, unfold with either a reflex-based mini-game of stopping a moving needle within a target and filling meters by mashing a button. It’s the exact same mechanic no matter if you’re playing the keyboard with your band, painting a picture for the weird art club, or simply trying to talk to someone without coming off as a creep. I’m getting a bit bored of it, but Kraken Academy promotes storytelling first and foremost so I understand not wanting to bog players down in too many different mechanics. 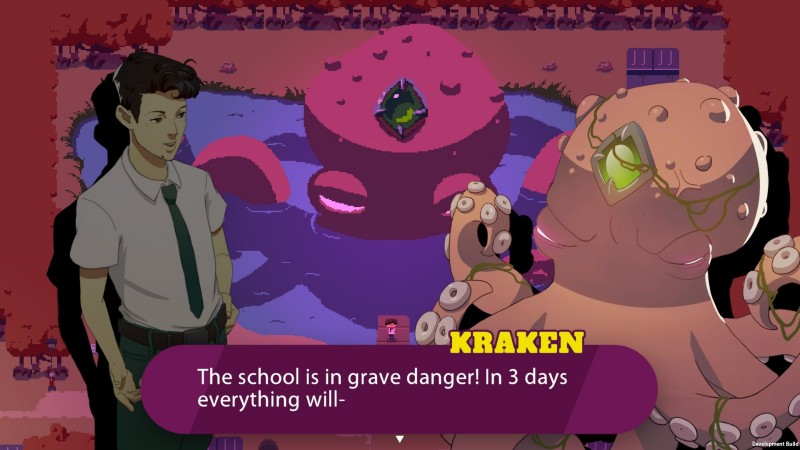 The game starts on a Monday with Wednesday serving as the big finale. Each time loop tasks you with unlocking a specific club’s guardian spirit during that three-day period. I started with the music club and am currently finishing up the art club. The Kraken dictates who you pursue next, so the main narrative feels less freeform than what I expected. You complete a string of simple missions, then unlock the final day that you can immediately fast-forward to if you don’t feel like engaging with side activities. In fact, it’s often better to push ahead as there’s sometimes less to do than you realize early on, which threw me off while searching for things I could do. I don’t actually mind this more direct approach. Coming off of Twelve Minutes and that game’s overly repetitive nature, having bigger arrows point me forward feels refreshing.

That said, Kraken Academy has yet to feel repetitive. The structure means I haven’t had to revisit any of the music club stuff while engaging with the art club. From what I’ve seen, sidequests play up the game’s looping nature the most. For example, I learned Broccoli girl wants a BBQ grill during the first loop, but I couldn’t find one until I was given access to the art club’s campus during the second loop. A lot of the game’s quests involve finding items for the characters who want them and figuring out which club’s campus houses those materials. Help a classmate and staff member enough earns you a friendship medal. Trading these items to the aforementioned hobo unlocks upgrades for the bottle converter that nets you more coins. Why do you want more coins? So far, to purchase decorations for your dorm or, more importantly, buy club membership cards from a shady dealer.

Kraken Academy is a bizarre experience thematically and narratively. I’m having a fun time soaking in its silliness, which constantly assaults you in often surprising ways. Playing the game itself is fine in a simple sense and, thus far, rewinding time feels less involved than it lets on. You start a loop, unlock whatever new items or abilities are present in that loop’s featured area, then apply those items/knowledge to unlock previously inaccessible places or conversations. It doesn’t feel dramatically different from how you progress in standard games, just dressed up. Of course, time-traveling could easily become more involved as I dive deeper into Kraken Academy’s mysteries. If it doesn’t, that’s probably fine too. I’m more invested in the writing and situations than the mechanics of the time-loops themselves. Yes, it would be cool if that stuff becomes more inventive. But having an elderly woman yell at me that her husband divorced her by silently dabbing at her or watching a girl foolishly ride her pony into a bounce house and pop it, causing it to, again, burst into flames for no reason is keeping me entertained just fine.

Source: Game Informer Kraken Academy Is An Absurd Time-Loop Adventure That Gets Sillier By The Second