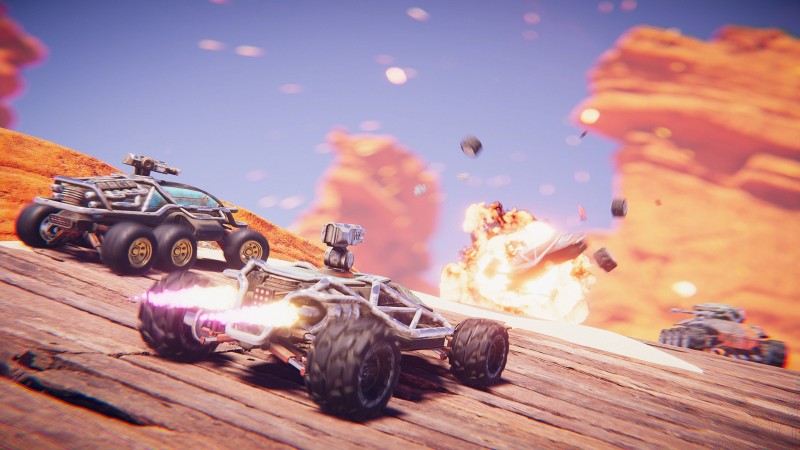 The car combat genre hasn’t fired on all cylinders since the heyday of Twisted Metal, but Keo may help reignite that stalled engine. The team-focused game pits players against each other in 3v3 matches as they tear up post-apocalyptic battlefields behind the driver seat of absurdly armed vehicles. Since July, the game’s been playable in open beta tests, but it will enter full Early Access later this month.

Players can choose from six vehicles, dubbed RCVs, and 24 weapons, with more of each hitting the game throughout its Early Access phase. RCVs fall into either attack, defense, or utility categories and sport various combinations of speed, armor, and other factors. Each vehicle has one primary weapon and four swappable guns, two in the front and two in the rear. By collecting currency, you can purchase new loadouts as well as cosmetics to personalize your death machine.

Keo currently features two modes: Deathmatch and Domination. Deathmatch is exactly what you’d expect, with players scoring points by blasting the opposing team into bits. Domination, meanwhile, tasks players with capturing outposts. During Early Access, the game will also be treated to new maps, an unspecified new game mode, and features such as ranked matchmaking, match spectating, and ultra-widescreen support.

You can purchase Keo for $19.99 when it becomes available on September 23. Developer Redcatpig Studio plans to keep the game in Early Access for the remainder of the year, with a full launch scheduled for sometime in early 2022. So far, it’s only confirmed for PC with no word of a console launch.

So car combat fans, what do you think of Keo? Does it look like it’ll scratch that Twisted Metal itch? Let us know in the comments!