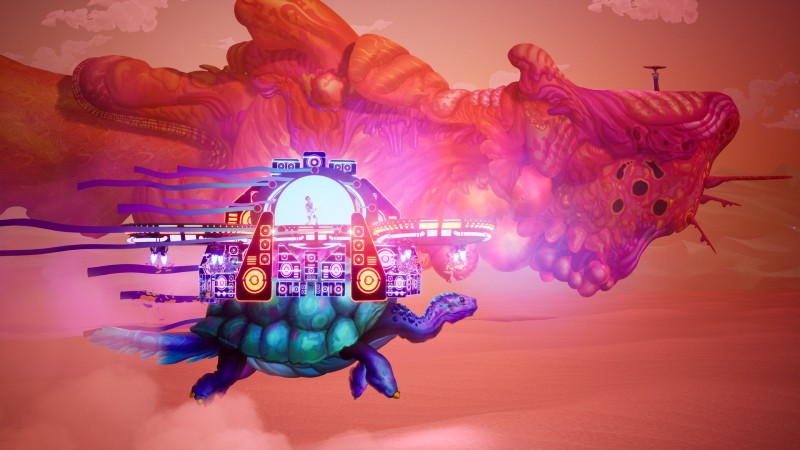 Rating: Everyone 10+
Reviewed on: Xbox Series X/S
Also on:
Xbox One, PC

Gripping his shimmering guitar, the performer formerly known as Francis Vendetti steps onto the ultimate stage for an astronomical rock showdown. Success means universal glory and fame; failure, a laser-based annihilation. The moment is awesome, but for all its undeniable show-stopping power, this crowning event doesn’t outshine the game’s more thoughtful moments. The Artful Escape’s strength lies in the protagonist’s relatable journey of self-actualization, which serves as a crucial foundation for its dopamine-spamming extravaganzas.

Francis Vendetti is an amazingly talented musician who suffers from imposter syndrome and self-doubt thanks to the inescapable legacy of his uncle, renowned folk singer Johnson Vendetti. He is a likable protagonist, and the game’s fun writing makes listening to his quippy observations enjoyable, but the game is not subtle. It wastes no time hammering home the promising musician’s hardships. 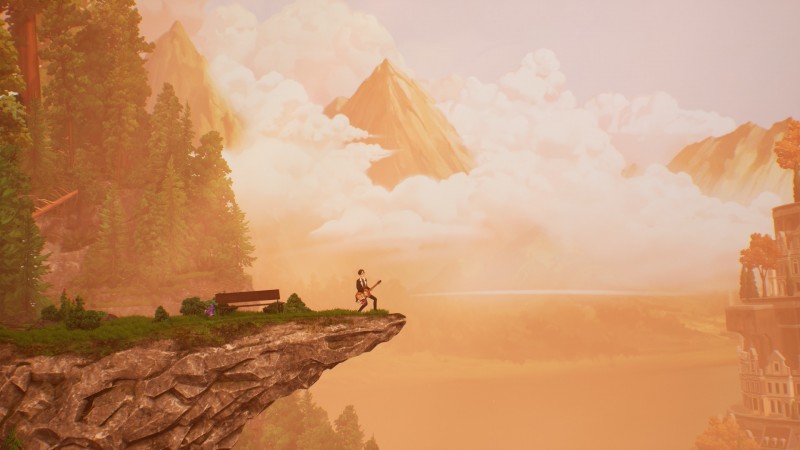 The starting screen features a poster for Francis’ upcoming debut concert. It’s dominated by a picture of his famous relative, barely leaving space for the actual headliner. Throughout the initial chapter, Johnson Vendetti’s looming shadow becomes darker and darker. Francis’ hometown welcome sign proudly displays a towering depiction of its most famous native son. An elderly neighbor remarks on his family resemblance to the deceased artist. And – due to the ongoing Johnson Vendetti festival – the singer’s music continuously plays throughout the city. The narrative teeters toward heavy-handed but quickly moves on to Francis’ transformative space escapade.

To escape his community’s expectations and the pressure of being the other Vendetti, Francis develops a dramatic alter-ego, and the action moves away from his pleasant small town into the enthralling expanse of the cosmos. The path from small-town strummer to stellar sensation is satisfying. It builds up from frustrating moments where Francis’ insecurity gets in the way of what he wants, to the final epiphany leading to self-acceptance and stardom. Between those two points is an intergalactic trek, with each extraterrestrial location looking as impressive as the next. The levels include alien snowscapes, deserts, and jungles, each exploring a different aspect of identity, helping Francis discover himself and create his new stage persona. 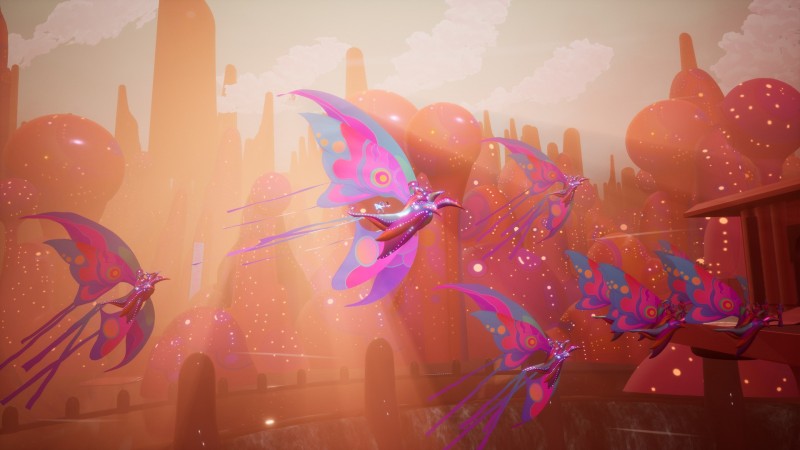 At set points, you make meaningful choices about Francis’ fictional interstellar identity. These choices connected me to a narrative that otherwise might have felt too bizarre. This process is like a character creator drawn out over the course of the adventure, but one that also allows you to confront your character’s mental health. The Artful Escape provides interesting ways to define your new persona, like giving yourself a grandiose backstory during an out-of-this-world late-night talk show interview or running through a magical wardrobe with a mall inside to pick out the ideal outfit.

As someone who spends ridiculous amounts of time crafting the perfect character before setting out in a video game, I found this multi-step approach to developing an alter-ego really fulfilling. I felt personally cool whenever characters later used my created title or referenced my hand-picked home planet. I put thought into my extraterrestrial counterpart, and The Artful Escape rewards that well. 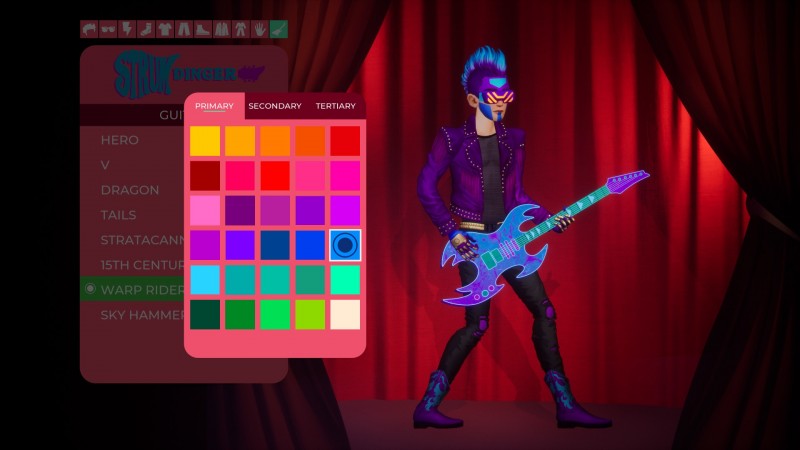 For all its appearance of incomprehensible cosmic grandeur, The Artful Escape is mechanically simple. You move through aesthetically stunning side-scrolling levels jumping over gaps and obstacles. Sprinkled throughout every distinct location are designated performance platforms where you play through a short rhythm game. This may turn off gamers seeking a challenge, but the game’s simplistic nature is empowering and made me feel like a superstar.

During your travels, you can hit a button to play your guitar, and typical platforming actions trigger fun, rock star-like animations. For instance, a simple long jump transforms into a truly epic guitar solo. The slide button causes the protagonist to slide dramatically across the ground on his knees. These actions don’t have much of an impact on the gameplay, but if you combine these flourishes with how the unbelievably beautiful world reacts to your energizing notes with bursts of color and movement, then The Artful Escape more than makes up for its shallow platforming.

The performance mini-games are hard to mess up. From small jam sessions to stellar concerts, the rules remain simple: hit a series of notes by pressing the five corresponding buttons in the correct order. There is no set timing and no fail state, but like the platforming sections, the on-screen effect of this simple game is fantastic. Amidst reactive laser shows and bursting pyrotechnics, I found it easy to feel like I was actually the galaxy’s shining star performer.

Like its protagonist, The Artful Escape leans into its unique identity and comes out the better for it. The game is breathtakingly beautiful, rich in music, and makes you feel like an intergalactic rock star while examining some thoughtful, relatable fears. 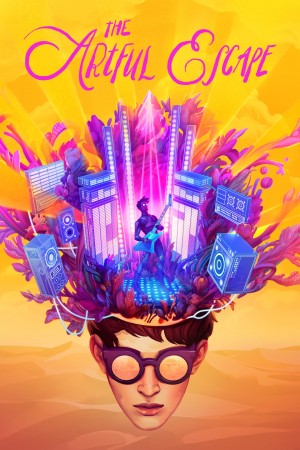 Summary: The Artful Escape is a gorgeous experience that makes you feel like a star, but challenge-seekers may need to look elsewhere.

Concept: Overcome suffocating expectations by creating an out-of-this-world stage persona in an epic musical quest to the edges of the universe

Graphics: From Earth’s amber waves of grain to space’s most psychedelic starfields, The Artful Escape is a symphony for the eyes and the ears

Sound: Backed by a rocking score, playing your guitar through the levels makes the world, and the game, come to life

Playability: The controls are simplistic, but everything works together to make you feel like the biggest rock star in the galaxy while you battle self-doubt

Entertainment: It won’t challenge your platforming skills, and the action boils down to galactic Simon Says, but The Artful Escape is a gorgeous experience that makes you feel utterly cool