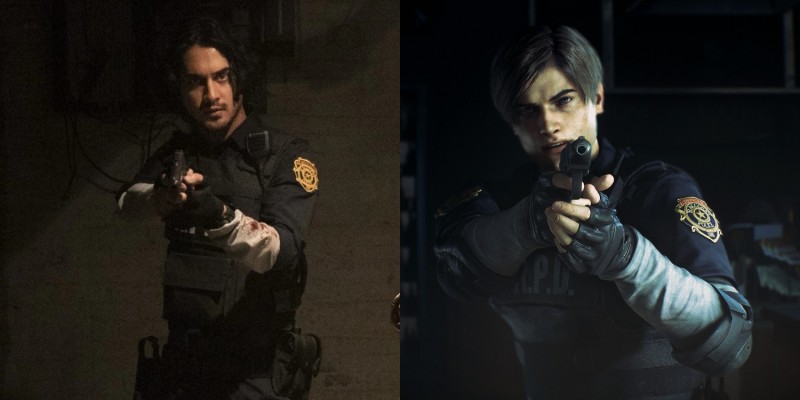 Earlier this week, we saw our first look at the cast of the upcoming Resident Evil movie reboot called Welcome To Raccoon City, and the casting choices seemed to leave some longtime fans confused. With many adaptations, there is the creative freedom to deviate from the source material. We’ve seen it a million times through the years, including storyline changes and casting choices. When characters like Leon, Jill, and Claire were revealed, immediately the internet was split into two groups: one that felt that the upcoming movie reboot looked promising. In contrast, the other group questioned the actors chosen for their iconic horror roles. The director, Johannes Roberts, gave a little insight into the reasons behind the casting decisions made for the upcoming Resident Evil: Welcome to Raccoon City movie.

In the first images revealed, seen here, Avan Jogia, who is set to play Leon S. Kennedy, was revealed in full costume alongside Hannah John-Kamen, who is donning the role of Jill Valentine. Seeing them in full costume showed off Roberts’ take on the Capcom horror franchise, but some fans weren’t seeing it. For the director, however, it wasn’t about getting the looks just right; it was about capturing the essence of the characters, something he felt the actors chosen did perfectly:

“It was hugely important with the whole casting process to find people who embodied the spirit and energy of the characters I wanted to portray,” the director told IGN. “I think often in-game adaptations one of the big flaws can be just casting someone to look visually like the characters – giving them the identical haircut and clothes but not really trying to give the audience the thing that a movie does better than a game – which is to create a three-dimensional character that you can really connect with and believe in. I think as I said before one of the traps of falling into game adaptations is to make it feel like a giant cosplay version of the game.”

He added, “Our cast is obviously much more diverse than the original games but I wanted to resist the trap of just casting because someone just happened to look like their character identically,” he continued. “We actually had a lot of actors who came in and recreated themselves perfectly visually as the character they were reading – it was uncanny at times ha! – but it was not what I felt this story needed. With Jill, I knew Hannah from Ready Player One and this show she was in at the time called The Stranger and I just knew she’d be perfect. Leon was much harder. We must have seen so many people – it was really quite a tricky role because of the balance of humor and weariness. Then Avan read and I was like he’s the one! He gets it.”

Many movies have had controversial casting choices pre-launch that have gone to make the character their own. Just look at Heath Ledger’s Joker in Batman. When his character was first revealed, many immediately hailed the film as a failure before seeing it. Now, many can’t unsee him in that role; rest his soul. Other movies have made similar casting moves without as much success, but we won’t know how any of the actors fare until we see the film for ourselves, which is set to arrive on November 24, 2021.

What are your thoughts on our first look at Resident Evil: Welcome To Raccoon City? Do you have faith in the direction Roberts is going in, or is this another adaptation you’re hoping to skip out on? Sound off with your thoughts in the comment section below!