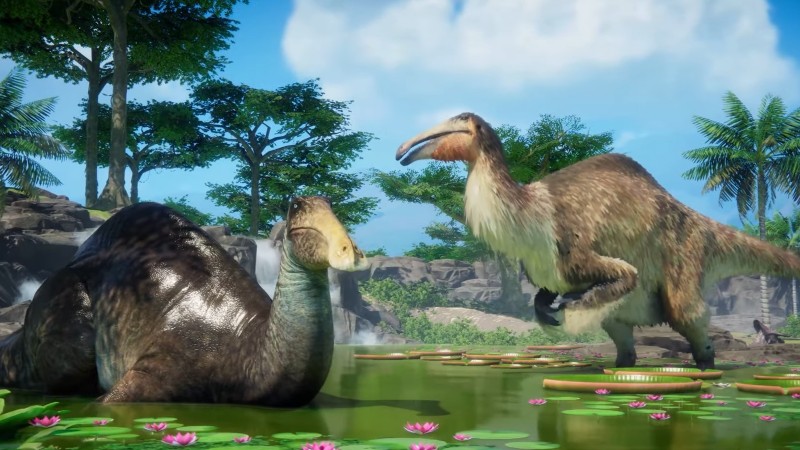 Prehistoric Kingdom is out to prove there’s enough room in this town for multiple dinosaur theme park simulators. While the Jurassic World Evolution games tread much of the same ground, Prehistoric Kingdom isn’t bound to a license and offers another choice for fans of raising dinosaurs and charging people to see them.

As a park manager, you have the tools to craft the dino zoo of your dreams. You can raise mountains, create rivers, and grow jungles to create your ideal terrain. You’ll then construct buildings and enclosures to house staff, entertain guests, and, of course, provide shelter for your collection of extinct critters. The structures you’ll build to keep your patrons happy include various exhibits, restaurants, and, perhaps most important, bathrooms.

Creatures in your care include reptiles such as brachiosaurus and t-rex, mammals like the woolly mammoth and smilodon (aka saber-toothed tiger), and birds like archaeopteryx. By keeping them well-fed and housed in the biome that best suits them, you’ll be rewarded with a happy animal. You can also collect genetic material from around the globe to uncover new creatures. Unlike Jurassic Park, Prehistoric Kingdom’s dinosaurs appear a little more scientifically accurate; some of them have feathers, for example. Developer Blue Meridian promises 22 animals will be available when the game enters Steal Early Access next year.

If you’d rather own a dinosaur park that doesn’t come with the baggage of constant disaster,  you can give Prehistoric Kingdom a try on December 6, when its closed beta kicks off. The game will then enter Early Access in April 2022.  For news coming out of this year’s Gamescom, be sure to visit our special coverage hub.