LEGO Star Wars: The Skywalker Saga Is Building Toward A Spring 2022 Release 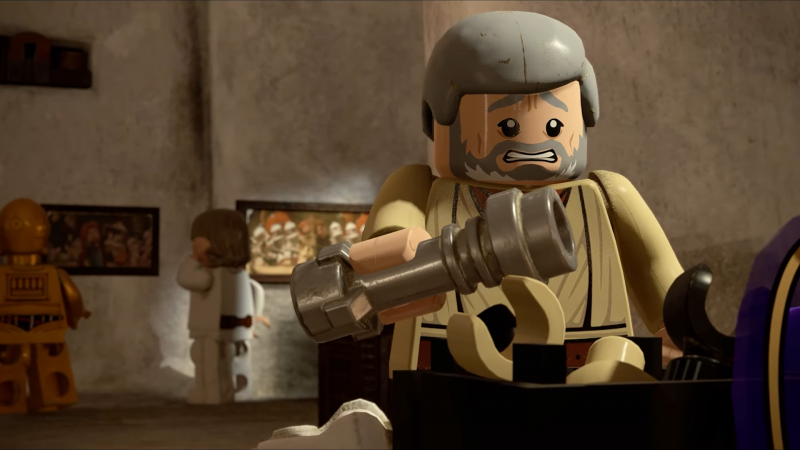 After a year of silence, LEGO Star Wars: The Skywalker Saga was shown off during Gamescom Opening Night Live. Two minutes of footage was revealed along with gameplay depicting scenes from all over the mainline Star Wars films.

The trailer starts with a serious montage of footage from Episode I and through time with each cut. We see the Duel of the Fates battle between Darth Maul and the forces of Obi-Wan and Qui-Gon which switches to shots of young Anakin, then to a fight against Count Dooku. Obi-Wan and Anakin are seen mid-scuffle on Mustafar, balancing precariously over the lava field below.

It’s not all prequel trilogy content, though. We get a hilarious reaction from Obi-Wan when Luke asks how his father died before moving into the newest set of films. Finn can be seen hopping over barricades and shooting at Sith Troopers. There are also Luke’s training sessions with Rey on the deserted oceanic planet of Ahch-To.

All of the action shown is up-close to the Lego characters, with the camera much closer than I’m used to seeing in the games of this series. This angle gives the action and characters a much more personal feel and makes the environments feel much grander. Leia is shown using cover while shooting, Luke rides a creature through Tosche Station, and Lando struts through what looks like a Wookie settlement on Kashyyyk. There’s plenty of Star Wars characters and locals to scope out in the trailer above.

An exact release date is still unknown, but LEGO Star Wars: The Skywalker Saga is set to launch sometime in the Spring 2022 timeframe. If you’ve missed out on any of the big reveals and announcements from Gamescom and Opening Night Live, check out our extensive coverage of the show here.