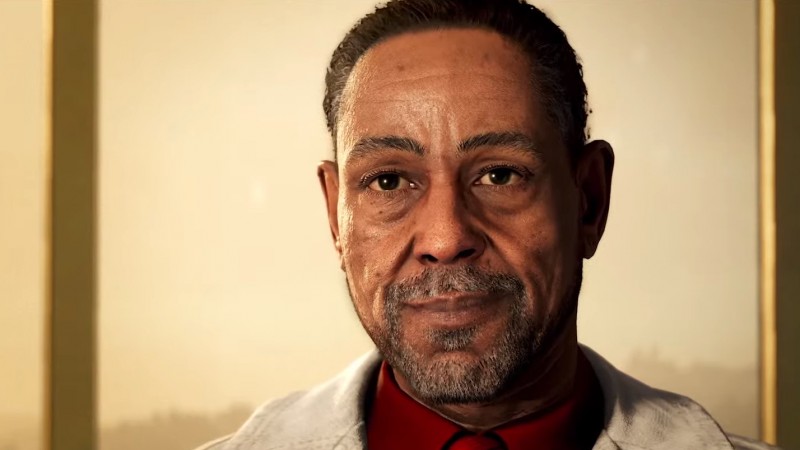 Who is Far Cry 6’s Antón Castillo? An extended story trailer that premiered at Gamescom today attempts to answer the question, but armed guards cut the answer short. Castillo, played by Emmy-nominated actor Giancarlo Esposito, kills without question for the greater good of the Yaran people and to set an example for his young son, Diego.

An in-game interviewer brings up the slave labor camps that Castillo uses to mass-produce a commodity called Viviro, the most effective cancer treatment. And when that same interviewer reminds Castillo of his adolescent imprisonment and a decade-long stint of hard labor, this enrages him, “When Yara becomes paradise, my methods – no one will care.” It’s safe to say that the casting team was lucky to get out of there alive.

Protagonist Dani Rojas, however, sees through Castillo’s lies. A guerrilla revolutionary directly affected by the dictator’s hyper-violent tendencies, they set out with a group of ragtag mercenaries to wrest Yara from cruel control. Cute and dangerous pets, as well as a bevy of hand-crafted weapons, might make the battle for freedom all the more interesting. Of course, a story of this nature can have some real-world implications. Narrative director Navid Khavari has directly stated that Far Cry 6 is a political game:

“The conversations and research done on the perspectives of those who fought revolutions in the late 1950s, early 1960s, and beyond are absolutely reflected in our story and characters. But if anyone is seeking a simplified, binary political statement specifically on the current political climate in Cuba, they won’t find it. I am from a family that has endured the consequences of revolution. I have debated revolution over the dinner table my entire life. I can only speak for myself, but it is a complex subject that should never be boiled down to one quote.”