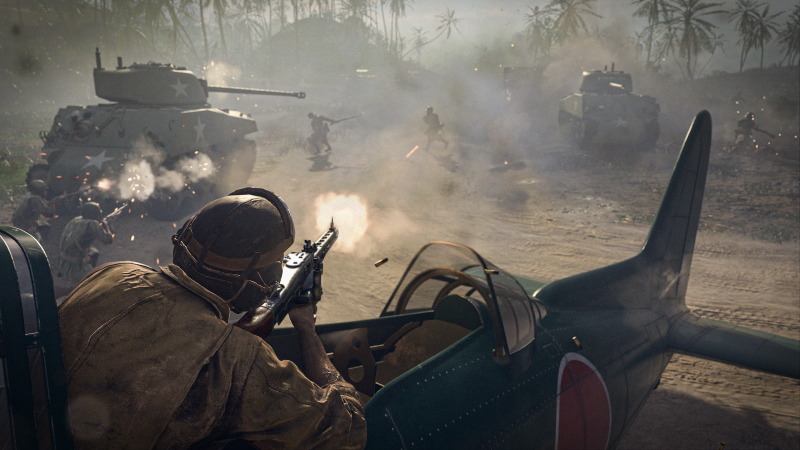 While the WWII setting may be one that’s been used time and time again for any number of titles, Sledgehammer Games is taking a hyperfocused look into the teams – what would be known as special forces – and their conception here as a small squad attempts to unravel a secret plot. Moreover, Call of Duty: Vanguard explores WII with environments that have been traditionally explored, but also numerous other fronts and theatres.

Players are headed to North Africa, the Eastern Front, the Western Front, and the Pacific in both the single-player campaign and multiplayer. Vanguard is aiming for sixty frames-per-second on all platforms for a fluid combat experience. In addition to Sledgehammer helming the campaign, Treyarch is lending its zombie talents to the title for the addition of a Zombies mode, and Raven is coming in with a brand new Warzone map. Seeing many Call of Duty studios come together to deliver this time around in their areas of expertise is refreshing, and should make for something interesting.

In the campaign, players take on the role of a specialized squad that’s ready to head into the heart of Berlin to discover the terrible truth behind the Phoenix Project. If this sounds a little like Inglourious Basterds, you’re in the right ballpark. Whatever it is, it’s the plan to shape the future of the Nazis and the Reich after Hitler’s fall. While the tale and everything associated with it are historically inspired, plot points like the Phoenix Project take some significant liberties with the actual past.

The crew is shaped with a cast of lively characters under the leadership of British Sergeant Arthur Kingsley. From around the rest of the world and the war comes the rest of the cast. Lt. Polina Petrova plays the Russian sharpshooter of the group, inspired by the famous sniper Lyudmila Pavilchenko. From America, we have fighter pilot Captain Wade Jackson, who performs admirably at Midway and is later shot down and picked up by passing infantry. Finally, Australian infantry Lucas Riggs rounds out the motley crew to assemble our team. Drawn to each other by fate and circumstance as the war rages on, this special forces assemblage is eventually tasked with heading to Berlin to unravel a mystery and put an end to a new Reich – before it begins.

In terms of multiplayer, there will be a hefty 20 maps available on launch. As always, some new elements keep Vanguard fresh even for veteran players. Reactive environments allow players to blow out bookcases, walls, boards, windows, and more to create additional sightlines, making once safe locations dangerous and keeping the game dynamic. Perhaps even more interesting, combat pacing is a new setting you can select in your quickplay options.

There are three different “combat paces” to explore, from tactical that features longer time to engagement and lower player counts to blitz, which has many players and an extremely short time to engagement. Picking your combat pace is as easy as dialing in any other setting from the quickplay button, so you can find a game that suits you alongside your other standard parameters. Whether you like to set up and perfect your snipe shots or just rush into the fray, combat pacing should help find a style that’s right for you alongside traditional multiplayer elements. A new gameplay mode, Champion Hill, is an 8-team extravaganza where players battle down to the last team.

With Sledgehammer helming a WWII story, Treyarch tackling Zombies, and Raven bringing the Warzone, Call of Duty: Vanguard is tapping into tons of specialized talent. We’ll see how it all comes together in November.