A Bee Almost Ruined The Beginning Of Skyrim 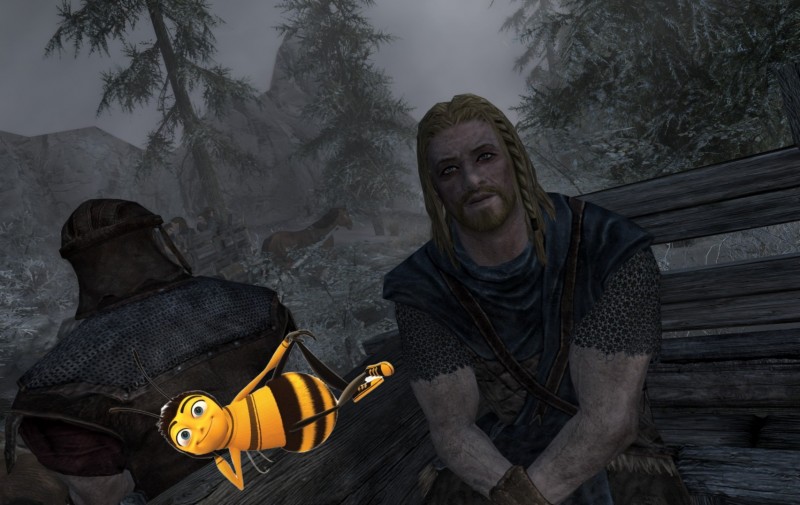 Let’s be real; the beginning of Skyrim was iconic. Riding in on the cart towards your execution and the “you’re finally awake” line has essentially become the new Rick Roll when it comes to memes. Not only was the scene itself pretty awesome in its own right, but the fade to black effect only to end up in the Skyrim cart has become a steadfast joke to put into TikTok videos, trailers, and other gags that point towards the game with a thousand releases. Little did we all know that one tiny bee almost ruined it all.

Nate Purkeypile, a former developer who worked at Bethesda for Skyrim, dropped this little nugget of truth over social media talking about the various issues this one scene gave the team. Nowadays, bugs in Bethesda games are nothing new. In fact, even the studio pokes fun at itself for some of the more oddball glitches found in its engine, but in this case? It was an actual bug that caused things to go awry. Purkeypile opened up about the beginning sequence and how the smallest things can cause everything to go off the rails.

See the issue with that cart ride is that it’s not just a cart on rails. That cart is physically simulated. Why you ask? Good question.

So anyways, this meant that all kinds of things would cause the cart to start to freak out and fly off the road.

In a lengthy thread, the former Bethesda dev talked about the cart ride and how it’s not a simple cart on the rails, it’s physically simulated, and the “why” behind why it went completely off course is kind of hilarious. If the road was too bumpy or the physics were not quite right, there were a million and one ways that this one simple scene could go sideways, causing the cart to “freak out and fly off the road.” “Maybe somebody accidentally put a rock too close to the road. The cart had a path it wanted to follow, but that doesn’t mean it was a path it COULD follow. Big difference,” Purkeypile added, equipped with a smiley face.

Where things get weird is at one point, the cart was doing what carts do until all of the sudden it started to shake uncontrollably before it eventually just shot right up in the sky “like a rocket ship.” “Something was telling that cart to just f*** right off and to get off that road. The thing is, it wasn’t happening every time.”

Basically, this means that the bee was seen in-game as an “immovable force of nature,” and since the bee read that it didn’t want the cart to move, then it couldn’t move the way as intended. And that’s how you get cart rocket ships, apparently. He ended his thread with one important lesson: “So game development is hard. Every time you fix one thing, you might be breaking another. This is especially true about open-world games. Yet, that interplay of all the systems is what ends up making them all super interesting.”

So there you have it. When something goes wrong, it’s probably the bees. But we should probably still save them anyway because bees are important.